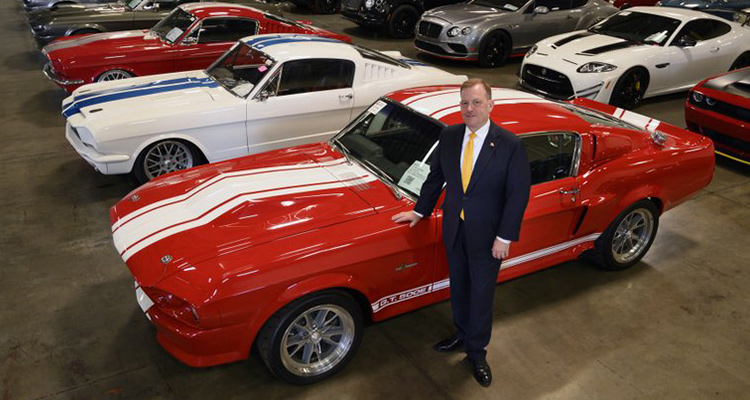 Bidding on that Trans Am alone had topped $65,000 by late Tuesday. The auction company said it had been driven less than 3,400 miles.

While the company’s owners have not been charged, they agreed to let the government auction their collection of 150 classic, performance and luxury vehicles, including a 1978 Pontiac Trans Am once owned by Burt Reynolds.

The replica of the car the late actor drove in “Smokey and the Bandit” and the other vehicles are to be auctioned Saturday, with online bidding already pushing the accumulated value past $5.5 million.

Bidding on that Trans Am alone had topped $65,000 by late Tuesday. The auction company said it had been driven less than 3,400 miles.

The owners have not been charged with any crime, said Lauren Horwood, a spokeswoman for the U.S. Attorney’s Office in Sacramento, but their vehicles and numerous other assets were seized by the federal government as part of the investigation.

The owners agreed to allow the vehicles to be auctioned off because it is expensive to store them and they lose value the longer they sit idle, Horwood said. FILE – In this March 15, 1978 file photo, actor Burt Reynolds polishes star that was unveiled in the Hollywood Walk of Fame in Los Angeles. Reynolds, who starred in films including “Deliverance,” “Boogie Nights,” and the “Smokey and the Bandit” films, died at age 82, according to his agent. (AP Photo/file)

“Mr. and Mrs. Carpoff have authorized the government to sell well over $75 million of their personal real estate, automobiles and other assets in the interest of the investors who may come up short when in time things settle.” — Malcolm Segal, attorney

The Carpoffs’ attorney, Malcolm Segal, said the couple have been cooperating with prosecutors.

“Mr. and Mrs. Carpoff have authorized the government to sell well over $75 million of their personal real estate, automobiles and other assets in the interest of the investors who may come up short when in time things settle,” Segal said.

Prosecutors alleged that the company engaged in $2.5 billion in investment transactions between 2011 and 2018, costing investors $1 billion in a classic Ponzi scheme.

The company based in Benicia, northeast of San Francisco, made solar generators mounted on trailers and marketed them as able to provide emergency power for cellphone companies or to provide lighting at sporting and other events.

However, purportedly to improve tax benefits, the investors never actually took possession of the generators, authorities said. Instead, they would lease the generators back to DC Solar, which would then provide them to other companies for their use.

He Also Admitted Flying to Las Vegas to Destroy Evidence

“The investors, all national and internationally known companies, have to date greatly benefited by being able to claim financially significant tax and depreciation credits since making their investments,” Segal said.

Roach, of Walnut Creek, admitted preparing financial documents to hide the pyramid scheme, and faces up to 10 years in prison when he is sentenced in January. He also pleaded guilty to securities violations.

Bayliss, of Martinez, admitted to preparing false reports showing thousands of solar generators that were sold to investors on paper but in fact did not exist.

He also admitted flying to Las Vegas to destroy evidence after federal investigators served search warrants at the company’s headquarters and other locations in December. He faces up to five years in prison.