Earthquake Probed as Possible Cause of So. California Fuel Fire 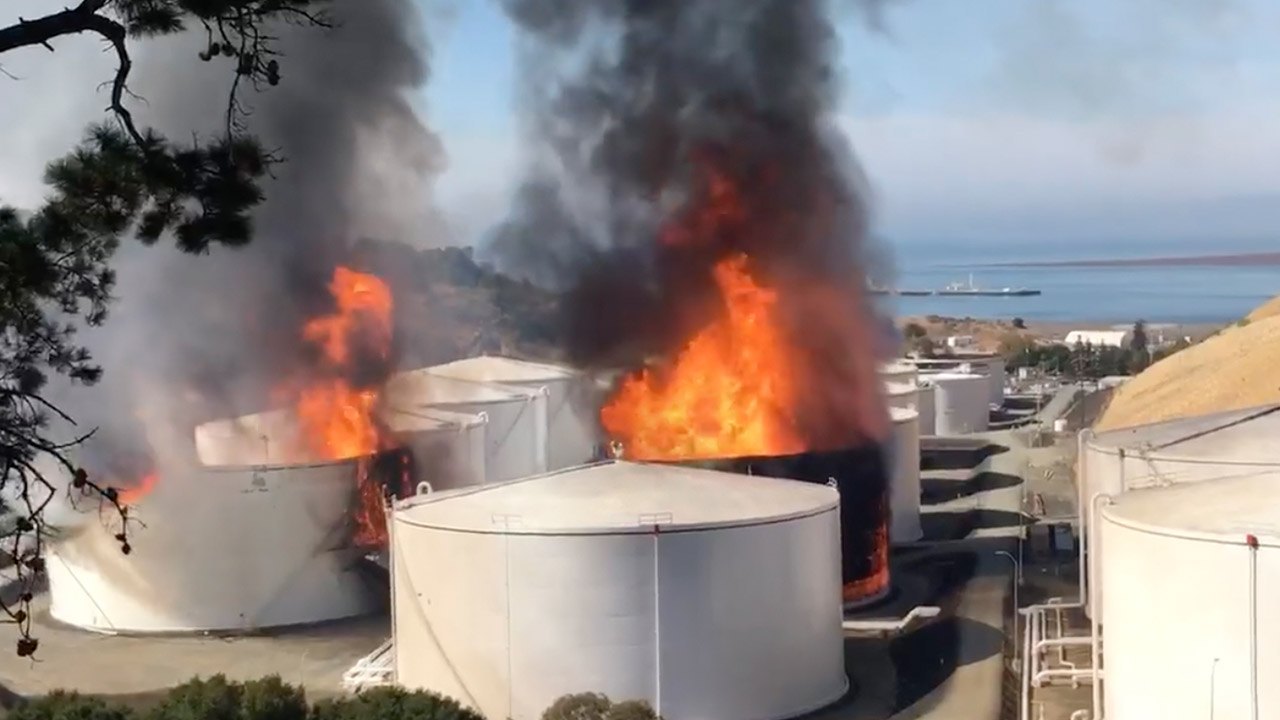 CROCKETT — Officials were trying to determine Wednesday if a 4.5 magnitude earthquake triggered an explosion at a fuel storage facility in the San Francisco Bay Area that started a fire and trapped thousands in their homes for hours because of potentially unhealthy air.
The earthquake struck about 15 miles southeast from the NuStar Energy fuel storage facility in the Bay Area community of Crockett 15 hours before the Tuesday fire that consumed thousands of gallons  of fuel. Aftershocks in the same area were still being felt Wednesday, including one with a 3.4 magnitude.
State and local inspectors were investigating the fire that shut down the facility, which according to the company has 24 tanks capable of holding more than 3 million barrels of different kinds of fuels.

Residents Ordered to Shelter in Place

The seven-hour blaze erupted in towering, stubborn flames Tuesday afternoon at the facility in Crockett, about 30 miles northeast of downtown San Francisco.
A firefighter was injured and was treated at a hospital, said Contra Costa Fire Department spokesman Steve Hill, who had no details about the firefighter’s injuries.
Randy Sawyer, Contra Costa County’s chief environmental health and hazardous materials officer, told KQED News that Tuesday’s earthquake caused malfunctions at two nearby oil refineries operated by Shell and Marathon oil.
Emergency sirens blared and a column of thick black smoke that could be seen for miles prompted Contra Costa County public health officials to order people in Crockett, neighboring Rodeo and part of Hercules to stay inside with fans and air conditioners off and to seal their windows and doors with tape or wet towels.
The concern was that hazardous particulates might be spewing from the fire.
County health officials late Tuesday lifted a shelter in place order affecting about 12,000 people. But at least four schools in the area closed on Wednesday as a precaution.
Contra Costa County health department spokesman Karl Fischer did not immediately return a phone message seeking comment.

The fire began at about 2 p.m. at the tank farm, one of several refining and fuel storage facilities in the Carquinez Strait, a major shipping thoroughfare and a key oil hub.
Video footage of the fire showed flames leading up to an explosion so strong it blew the lid of one of the tanks high into the air.
The fire badly damaged or destroyed two tanks containing about 250,000 gallons of ethanol, a gasoline additive. The facility also stores gasoline, diesel and aviation fuels, according to NuStar Energy LP.
About 200 firefighters fought the flames with foam and water, trying to prevent it from spreading to other tanks containing jet fuel and ethanol. They would knock down the flames but they kept reigniting in the spilled fuel.