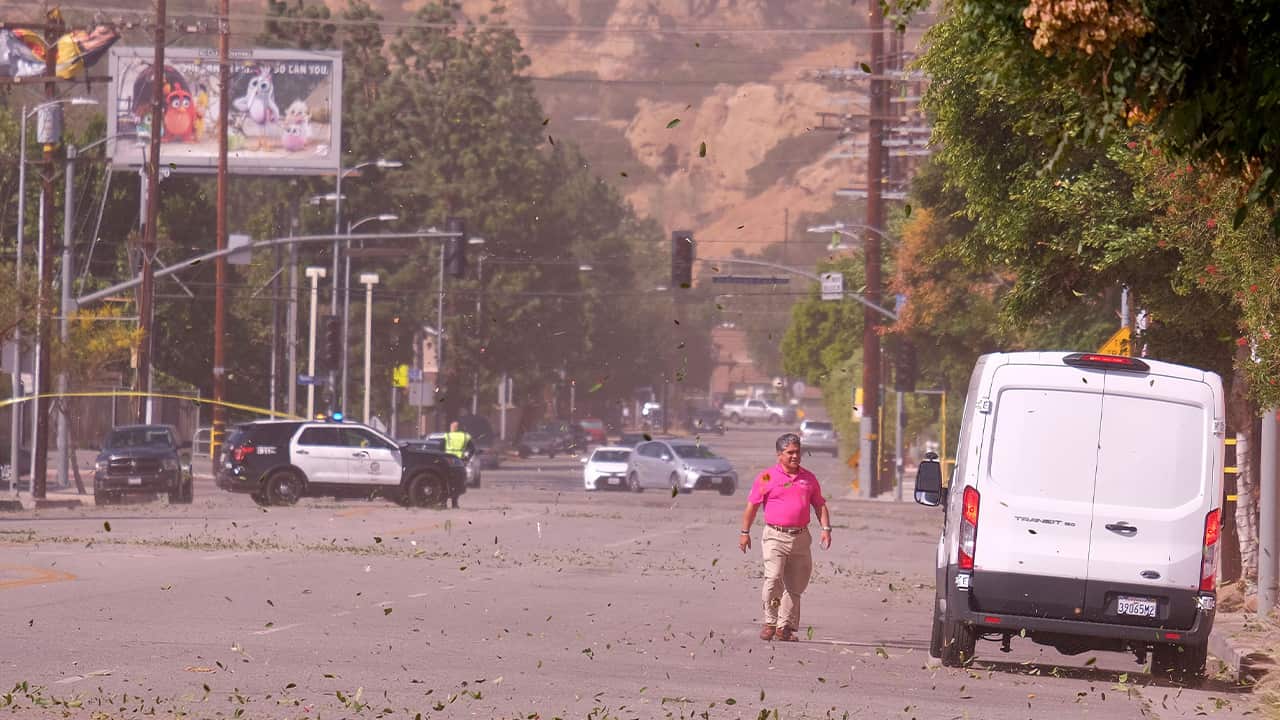 LOS ANGELES — Even as the winds gusted dangerously as forecast, California’s biggest utility faced hostility and second-guessing Thursday for shutting off electricity to millions of people to prevent its equipment from sparking wildfires.


“We have found multiple cases of damage or hazards [caused by heavy winds, including fallen branches that came in contact with overhead lines]. If they were energized, they could’ve ignited.” — Sumeet Singh, a vice president for the utility
Gov. Gavin Newsom criticized Pacific Gas & Electric and ordinary customers complained about the inconveniences caused by the unprecedented blackouts that began Wednesday, with many wondering: Did PG&E go too far in its attempt to ward off more deadly fires? Could the utility have been more targeted in deciding whose electricity was turned off and when?
PG&E, though, suggested it was already seeing the wisdom of its decision borne out as gusts topping 77 mph  raked the San Francisco Bay Area amid a bout of dry, windy weather.

“We have found multiple cases of damage or hazards” caused by heavy winds, including fallen branches that came in contact with overhead lines, said Sumeet Singh, a vice president for the utility. “If they were energized, they could’ve ignited.”
Because of the dangerous weather in the forecast, PG&E cut power Wednesday to an estimated 2 million people in an area that spanned the San Francisco Bay Area, the wine country north of San Francisco, the agricultural Central Valley and the Sierra Nevada foothills. By Thursday evening, the weather had calmed and the number of customers in the dark was down to about 510,000.
Inspections and repairs were expected to resume at daybreak and power could be restored Friday to many more customers, Singh said.

Many Affected by Outages Not so Sure About Move

PG&E cast the blackouts as a matter of public safety, aimed at preventing the kind of blazes that have killed scores of people over the past couple of years, destroyed thousands of homes, and ran up tens of billions of dollars in claims that drove the company into bankruptcy.
CEO Bill Johnson didn’t respond to Newsom’s criticisms but promised if future wind events require similar shutoffs, the utility will “do better” when it comes to communicating with customers. It’s unacceptable that its websites crashed, maps were inconsistent and call centers were overloaded, Johnson said.
“We were not adequately prepared,” he said.
The fire danger spread to Southern California on Thursday as raging winds moved down the state. Southern California Edison shut off electricity to about 12,000 people just outside Los Angeles, with wider blackouts possible.
A blaze ripped through a mobile home park in Calimesa, a city about 65 miles (104 kilometers) east of Los Angeles, destroying dozens of residences. The fire was started when trash being hauled caught fire and the driver dumped the load aside a road, according to Riverside County officials.
Many of those affected by the outages, which could last as long as five days, were not so sure about the move. Carlos Lama of Bayside Cafe, which was among businesses to lose power due to PG&E’s public safety power shutoff, uses an LED lamp and light from his phone at the counter of the restaurant in Sausalito, Calif., Wednesday, Oct. 9, 2019. More than a million people in California were without electricity Wednesday as the state’s largest utility pulled the plug to prevent a repeat of the past two years when windblown power lines sparked deadly wildfires that destroyed thousands of homes. (Alan Dep/Marin Independent Journal via AP)

Sergio Vergara, owner of Stinson Beach Market, situated on scenic Highway 1, on the Pacific Coast just north of San Francisco, operated the store with a propane generator so his customers could have coffee, milk, meat and frozen meals.

Marybel Batjer, president of the California Public Utilities Commission, blasted PG&E’s communication and said the situation was unacceptable.
Experts say the big shut-off will yield important lessons for the next time.
Deliberate blackouts are likely to become less disruptive as PG&E gets experience managing them and rebuilds sections of the grid so that outages can be more targeted, said Michael Wara, a researcher on energy and climate policy at Stanford University.
Grids are built and operators are trained to keep the power on at all times, so the company and its employees have little experience with intentionally turning the electricity off in response to rapidly changing weather, he said.
“That’s a skill that has to be learned, and PG&E is learning it at a mass scale right now,” Wara said.
After a June shut-off in the Sierra foothills, PG&E workers reported repairing numerous areas of wind damage, including power lines hit by tree branches.
“That was worth it,” Wara said of the deliberate blackout. “That could have prevented a catastrophe.”