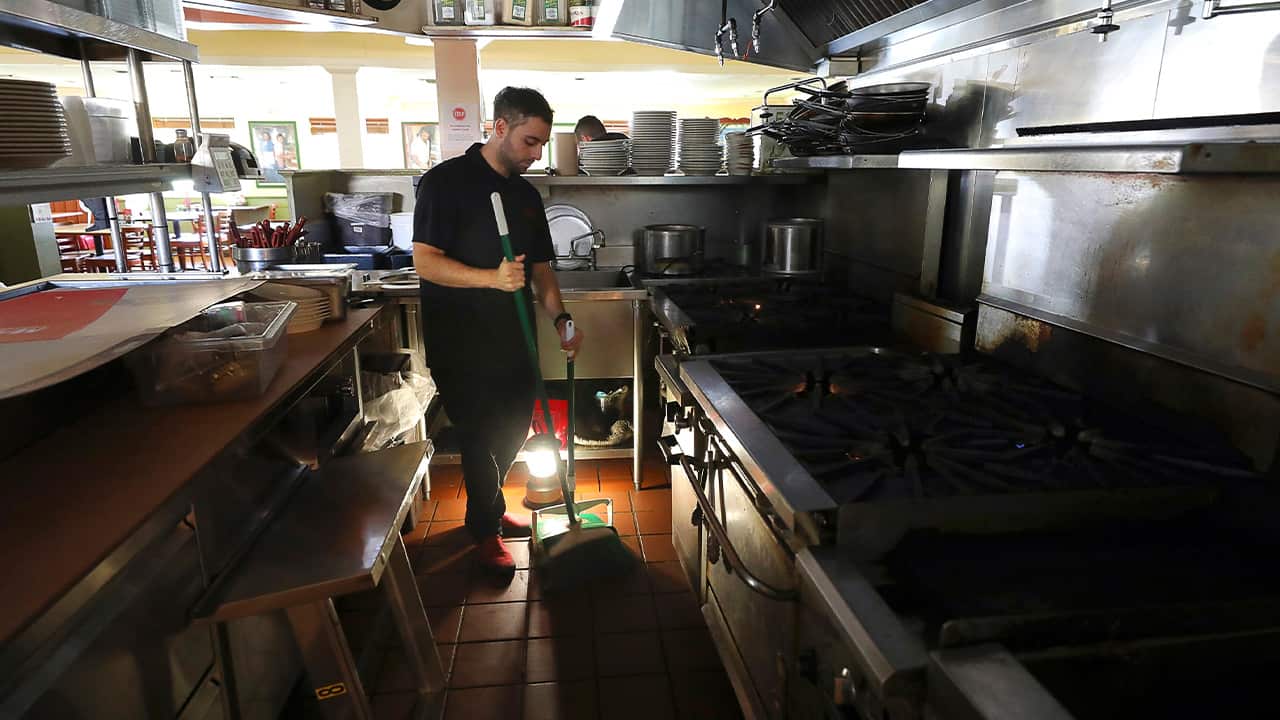 SAN FRANCISCO — The lights were back on Friday for many of the nearly 2 million Northern California residents who lost electricity when Pacific Gas & Electric switched it off this week in an effort to prevent wildfires, as the first death linked to the outages was reported — a man who relied on oxygen.
The threat of widespread outages loomed in Southern California after the winds moved to the Los Angeles area, where a wildfire fueled by strong Santa Ana winds prompted officials to order the the evacuation of 100,000 people from their homes in the foothills of the San Fernando Valley in Los Angeles County.
In that fire, one man went into cardiac arrest and died at the scene.
PG&E restored power in Northern California after workers inspected power lines to make sure it was safe to do so. The winds had increased the possibility of transmission lines toppling to the ground and starting wildfires.
The utility said 543,000 Northern California businesses and residences got their power back — but that nearly 195,000 customers were still in the dark. About half of those who lost power in the San Francisco Bay Area had it again on Friday. The city itself was not subject to the preventive outages. Experts have said there are between two and three people for every electrical customer.
Authorities said Friday that a man dependent on oxygen died about 12 minutes after PG&E shut down power in El Dorado County Wednesday. Although he could not say if the shutdown caused the man’s death, El Dorado County Fire Chief Lloyd Ogan said the man’s oxygen equipment required power.

Ogan said fire crews arrived at a residence in Pollock Pines after 3:30 a.m. to find the man, in his 60s, unresponsive.

PG&E Cast the Blackouts as a Matter of Public Safety

PG&E faced hostility and second-guessing over the shut-offs, which prompted runs on supplies like coolers and generators and forced institutions to shut down. The University of California, Berkeley, was closed Friday for the third day.
Ryan Fisher, a partner in consumer goods and retail practice at global consultancy A.T. Kearney estimated $100 million in $200 million in fresh food was likely lost because of the outages along with $30 million a day in consumer spending.
PG&E cast the blackouts as a matter of public safety to prevent the kind of blazes that have killed scores of people over the past couple of years, destroyed thousands of homes, and ran up tens of billions of dollars in claims that drove the company into bankruptcy.
The utility suggested it was already seeing the wisdom of its decision borne out as gusts topping 77 mph raked some hilltops where wildfire risk was extremely high.
“We have found multiple cases of damage or hazards” caused by heavy winds, including fallen branches into overhead lines, said Sumeet Singh, a vice president for the utility.
Utility CEO Bill Johnson promised if future wind events require similar shut-offs, the utility will “do better” at communicating with customers. It’s unacceptable that its website crashed, maps were inconsistent and call centers were overloaded, Johnson said.
“We were not adequately prepared,” he said.