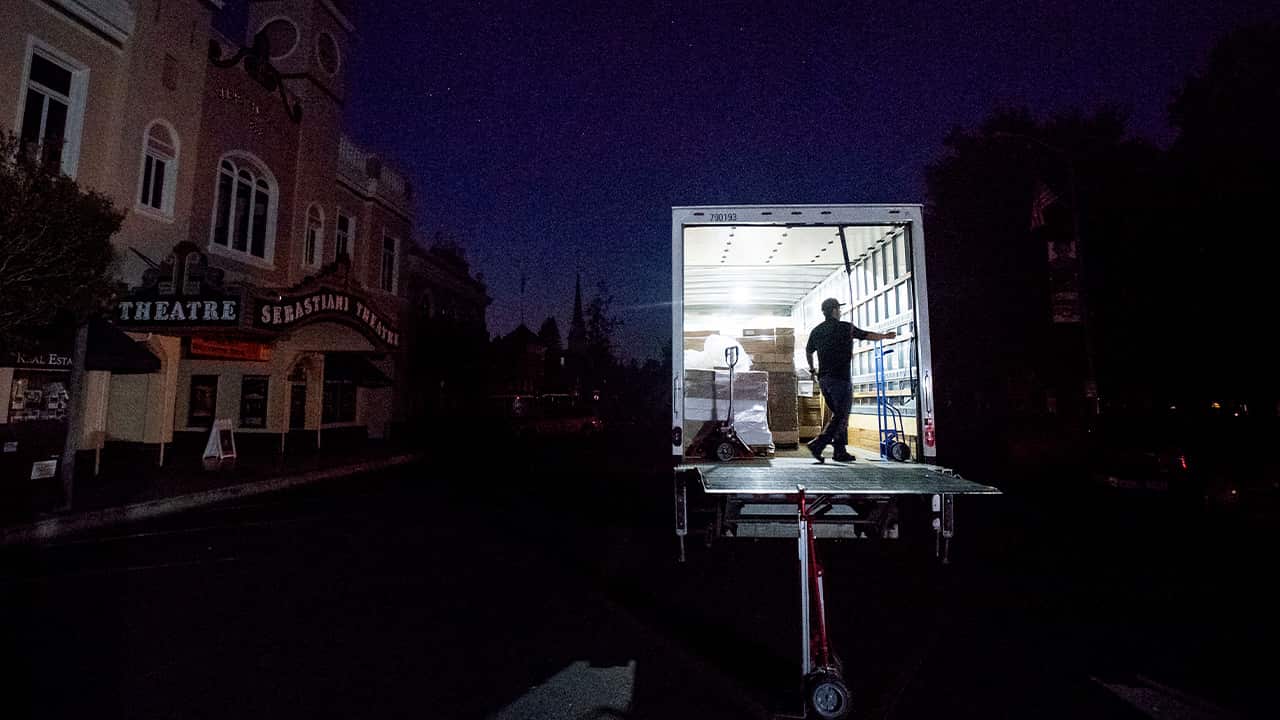 SAN FRANCISCO — Pacific Gas & Electric shut off power to more than a million people Wednesday for what could be days on end, in the most sweeping effort in state history to prevent wildfires caused by windblown power lines.

Gov. Newsom: Utility Needs to Upgrade and Fix Its Equipment

The winds will be the strongest and most widespread the region has seen in two years, and given the scope of the danger, there was no other choice but to stage the largest preventive blackout in state history, PG&E said.
“This is a last resort,” said Sumeet Singh, head of the utility’s Community Wildfire Safety Program.
However, people should be outraged by the move, Gov. Gavin Newsom said. “No one is satisfied with this, no one is happy with this,” he said.
The utility needs to upgrade and fix its equipment so massive outages are not the norm going forward, he said.
It could take as many as five days to restore power after the danger has passed because every inch of power line must be checked to make sure it isn’t damaged or in danger of sparking a blaze, PG&E said.
The news came as residents in the region’s wine country north of San Francisco marked the two-year anniversary of deadly wildfires that killed 44 and destroyed thousands of homes. San Francisco is the only county in the nine-county Bay Area where power will not be affected.
To the south, Southern California Edison said more than 106,000 of its customers in parts of eight counties could face power cuts as early as Thursday as Santa Ana winds loomed.
The cutbacks followed a plan instituted after deadly wildfires — some blamed on downed PG&E transmission lines — destroyed dozens of lives and thousands of homes in recent years and forced the utility into bankruptcy over an estimated $30 billion in potential damages from lawsuits. FILE – In this Nov. 9, 2018, file photo, Pacific Gas & Electric crews work to restore power lines in Paradise, Calif. Two years to the day after some of the deadliest wildfires tore through Northern California wine country, two of the state’s largest utilities were poised Tuesday, Oct. 8, 2019, to shut off power to more than 700,000 customers in 37 counties, in what would be the largest preventive shut-off to date as utilities try to head off wildfires caused by faulty power lines. (AP Photo/Rich Pedroncelli, File)

Classes Cancelled for Thousands of Students

The outages Wednesday weren’t limited to fire-prone areas because the utilities must turn off entire distribution and transmission lines to much wider areas to minimize the risk of wildfires.

But Santa Rosa Mayor Tom Schwedhelm said he was grateful PG&E was taking proactive action. His city lost 5% of its housing a 2017 fire that killed 22 and torched nearly 6,000 structures in Sonoma and Napa counties. State investigators determined the fire was sparked by a private electrical system, and was not the fault of PG&E.
Hospitals would operate on backup power, but other systems could see their generators fail after a few days. Outages even posed a threat that fire hydrants wouldn’t work at a time of extreme fire danger.
The East Bay Municipal Utility District serving Alameda and Contra Costa counties, recently spent $409,000 to rent 29 backup generators for use beginning at noon Wednesday.
“The backup generators that we have are stationed at the pumping plants, which pump water to the fire hydrants,” spokeswoman Andrea Pook told the San Francisco Chronicle.
Counties activated their emergency centers and authorities urged people to have supplies of water for several days, to keep sensitive medicines such as insulin in cool places, to drive carefully because traffic lights could be out, to have a full gas tank for emergencies and to check the food in freezers and refrigerators for spoilage after power is restored.
PG&E set up about 30 community centers offering air conditioning, restrooms, bottled water and electronic charging stations during daylight hours.
Oakland Mayor Libby Schaaf asked residents Tuesday not to clog 911 lines with non-emergencies and urged people to be prepared. The city canceled all police officers’ days off in preparation for the outages.
PG&E said it was informing customers by text and email about where and when the power would be cut. But its website, where it directed people to check whether their addresses would be affected, was not working most of the day Tuesday after being overloaded with visitors.