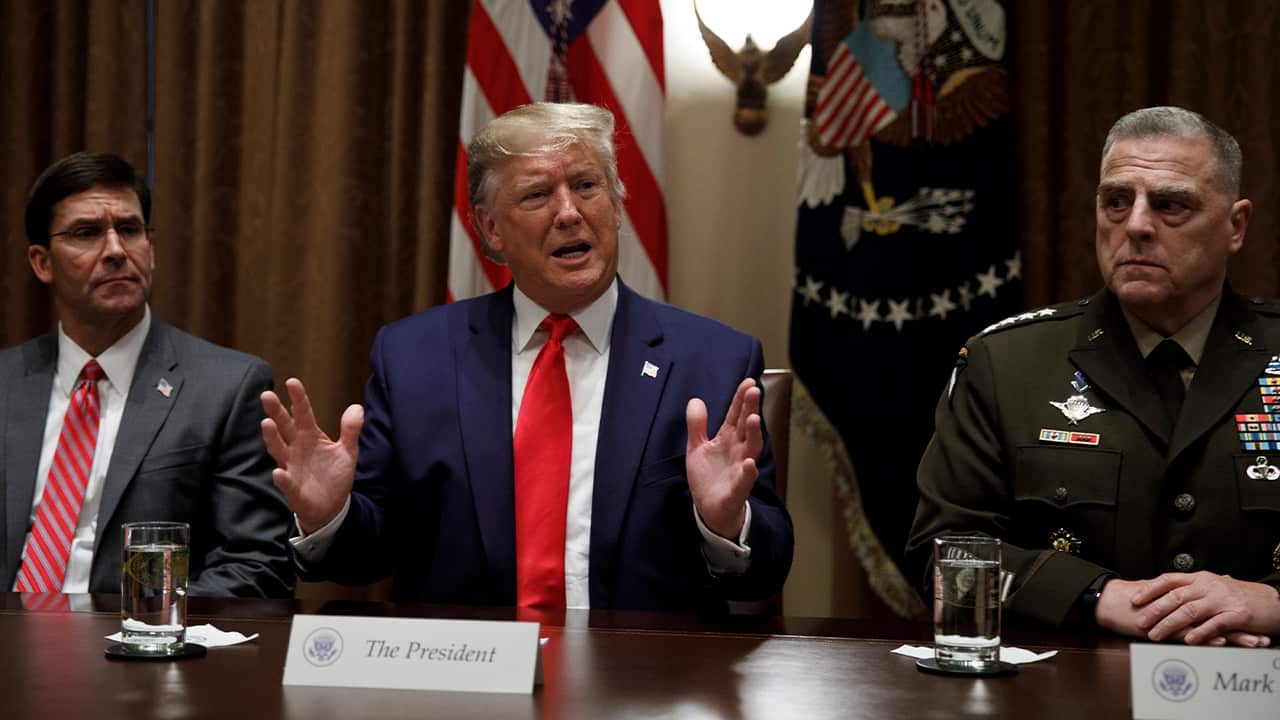 WASHINGTON — As House Democrats fire off more subpoenas, the White House has launched a high-stakes strategy to counter the impeachment threat to President Donald Trump: Stall. Obfuscate. Attack. Repeat.
One of the administration’s first moves: the State Department on Tuesday barred Gordon Sondland, the U.S. European Union ambassador, from appearing before a House panel conducting the impeachment inquiry into Trump.
“I would love to send Ambassador Sondland, a really good man and great American, to testify, but unfortunately he would be testifying before a totally compromised kangaroo court, where Republican’s rights have been taken away, and true facts are not allowed out for the public to see,” Trump wrote on Twitter.

I would love to send Ambassador Sondland, a really good man and great American, to testify, but unfortunately he would be testifying before a totally compromised kangaroo court, where Republican’s rights have been taken away, and true facts are not allowed out for the public….

Sondland’s attorney, Robert Luskin, said his client was “profoundly disappointed” that he wouldn’t be able to testify. A whistleblower’s complaint and text messages released by another envoy portray Sondland as a potentially important witness to allegations that the Republican president sought to dig up dirt on a Democratic rival in the name of foreign policy.
Trump aides are honing their approach after two weeks of what allies have described as a listless and unfocused response to the impeachment probe. One expected step is a letter to House Speaker Nancy Pelosi rejecting the inquiry because Democrats haven’t held a vote on the matter and moving to all but ceasing cooperation with Capitol Hill on key oversight matters.
The strategy risks further provoking Democrats in the impeachment probe, setting up court challenges and the potential for lawmakers to draw up an article of impeachment accusing Trump of obstructing their investigations. Rep. Adam Schiff, chairman of the House intelligence committee, said that Sondland’s no-show would be grounds for obstruction of justice and could give a preview of what some of the articles of impeachment against Trump would entail.
But as lawmakers seek to amass ammunition to be used in an impeachment trial, the White House increasingly believes all-out warfare is its best course of action.

House Democrats Issued New Round of Subpoenas on Monday

“What they did to this country is unthinkable. It’s lucky that I’m the president. A lot of people said very few people could handle it. I sort of thrive on it,” Trump said Monday at the White House. “You can’t impeach a president for doing a great job. This is a scam.”
House Democrats, for their part, issued a new round of subpoenas on Monday, this time to Defense Secretary Mark Esper and acting White House budget director Russell Vought. Pelosi’s office also released an open letter signed by 90 former national security officials who served in both Democratic and Republican administrations, voicing support for the whistleblower who raised concerns about Trump’s efforts to get Ukraine to investigate political foe Joe Biden.
“A responsible whistleblower makes all Americans safer by ensuring that serious wrongdoing can be investigated and addressed, thus advancing the cause of national security to which we have devoted our careers,” they wrote. “Whatever one’s view of the matters discussed in the whistleblower’s complaint, all Americans should be united in demanding that all branches of our government and all outlets of our media protect this whistleblower and his or her identity. Simply put, he or she has done what our law demands; now he or she deserves our protection.”
The House Intelligence, Oversight and Foreign Affairs committees are investigating Trump’s actions pressing Ukraine to investigate Biden and his son, potentially interfering in the 2020 election. The former vice president, for his part, has accused Trump of “frantically pushing flat-out lies, debunked conspiracy theories and smears against me.” Trump also withheld hundreds of millions of dollars in military assistance to Ukraine.
Trump and his team’s initial strategy had been to try to undermine the credibility of the intelligence community whistleblower who first raised questions about Trump’s conduct with Ukraine, just as they tried to undercut special counsel Robert Mueller and his team. They stressed that the whistleblower had only second- or third-hand information and alleged that the person misrepresented the president’s efforts. But now a second whistleblower has come forward to corroborate the information, and a cache of text messages echoes the concerns that have been laid out.

The White House has struggled to communicate its message beyond Trump’s angry public proclamations and an endless stream of tweets.
Indeed, top officials were absent from the Sunday talk shows, and the sole White House official to appear in public on Monday dodged questions on the inquiry.