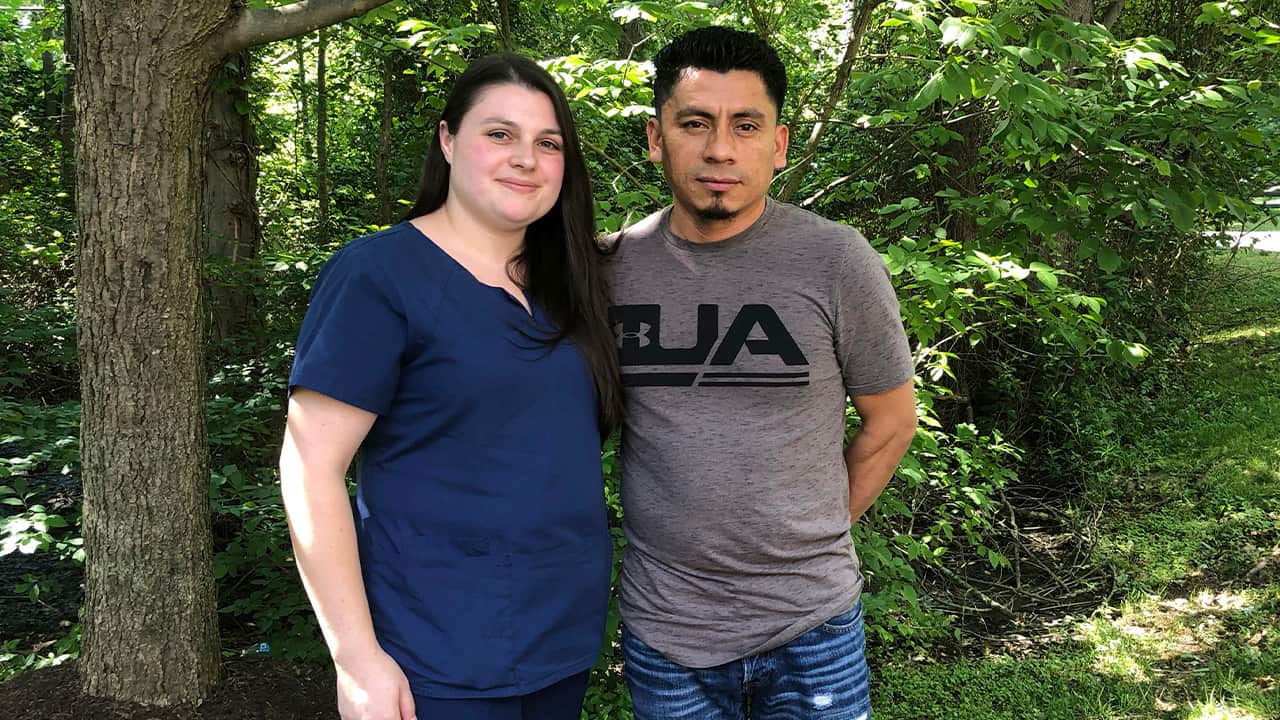 BALTIMORE — Alyse and Elmer Sanchez were thrilled when they survived their “green card” interview, a crucial step in obtaining lawful status in the United States. She texted her family from the immigration office as relief washed over her: The officer had agreed that their marriage is legitimate.
Moments later, Elmer was in shackles, detained pending deportation to his native Honduras, leaving her alone with their two little boys.
“We feel it was a trap, a trick, to get us there,” Alyse said.
The Sanchezes have joined five other couples in a class action accusing federal agents of luring families to marriage interviews in Baltimore, only to detain the immigrant spouse for deportation.
Federal regulations allow U.S. citizens like Alyse to try to legalize the status of spouses like Elmer, who has been living in the country illegally. Thousands of families are doing it: Records show the U.S. Citizenship and Immigration Services approved 23,253 provisional unlawful presence waivers, the final documents spouses, children or parents of citizens need before leaving the country and applying to rejoin their families legally.
But the American Civil Liberties Union says a growing number of officers have “cruelly twisted” the rules by detaining immigrant spouses following marriage interviews. The ACLU is pursuing a similar complaint in Massachusetts and says dozens of detentions also have happened at field offices in New York, Virginia, Florida, Illinois and California.

The Maryland case is assigned to U.S. District Judge George J. Hazel, who already reversed the deportation of a Chinese man detained after a successful marriage interview in Baltimore. Ruling just before Wanrong Lin landed in Shanghai last November, Hazel said the government can’t use the process “as a honeypot to trap undocumented immigrants who seek to take advantage of its protections.”
Alyse told The Associated Press her family’s life “just seemed so perfect.”

Elmer Was ‘Personally Served’ With a Notice for His Deportation Hearing

It’s unclear how many individuals have successfully become permanent U.S. residents through the process. It facilitates a proper record for families with mixed citizenship, and it’s meant “to avoid the grievous consequences of forcing a spouse or parent to leave” the U.S. for years while trying to build a lawful immigration case from their home countries, the ACLU says.
Now, the plaintiffs say, the U.S. Department of Homeland Security is unlawfully using the process as bait. ACLU of Maryland attorney Nick Steiner said it began in 2017 and seems to happen randomly nationwide.
“Previous practice would allow immigration lawyers to bring their clients to their interviews without fear of arrest because there was an understanding that they were trying to receive Green Cards, notwithstanding the removal orders, and there’s also longstanding guidance that USCIS should be following, that prohibits arrests at interviews,” he said in an email.
The Homeland Security agencies — through Immigration and Customs Enforcement spokesman Shawn Neudauer and Citizenship and Immigration Services spokeswoman Jane Cowley — said they don’t comment on pending litigation. But depositions and emails released in the Massachusetts case suggest federal officials were coordinating to target immigrant spouses at their marriage interviews.
“In my opinion, it makes sense for us to arrest aliens with final removal orders as they represent the end of the line in the removal process,” wrote Andrew Graham, a Boston-based ICE officer. “They are typically the easiest to remove, they have the shortest average length of stay, and at the end of the day we are in the removal business and it’s our job to locate and arrest them.”
The government in its response to the complaint filed in Maryland argued the case should be dismissed because the court lacks jurisdiction and the plaintiffs’ “claims are not likely to be successful.” It also argued Elmer was “personally served” with a notice for his deportation hearing and that it showed a date, time and place.

Elmer Was Shuffled Around Detention Facilities While Alyse Sought Counseling

The Sanchezes were nervous but hopeful as they told their interviewer how they met and answered questions. At the officer’s request, Alyse spoke with her husband in Spanish, on camera. The interviewer confirmed their bona fides — Alyse would get the formal approval in the mail the next day — but said his supervisor “had to come and authenticate the case,” according to the lawsuit.