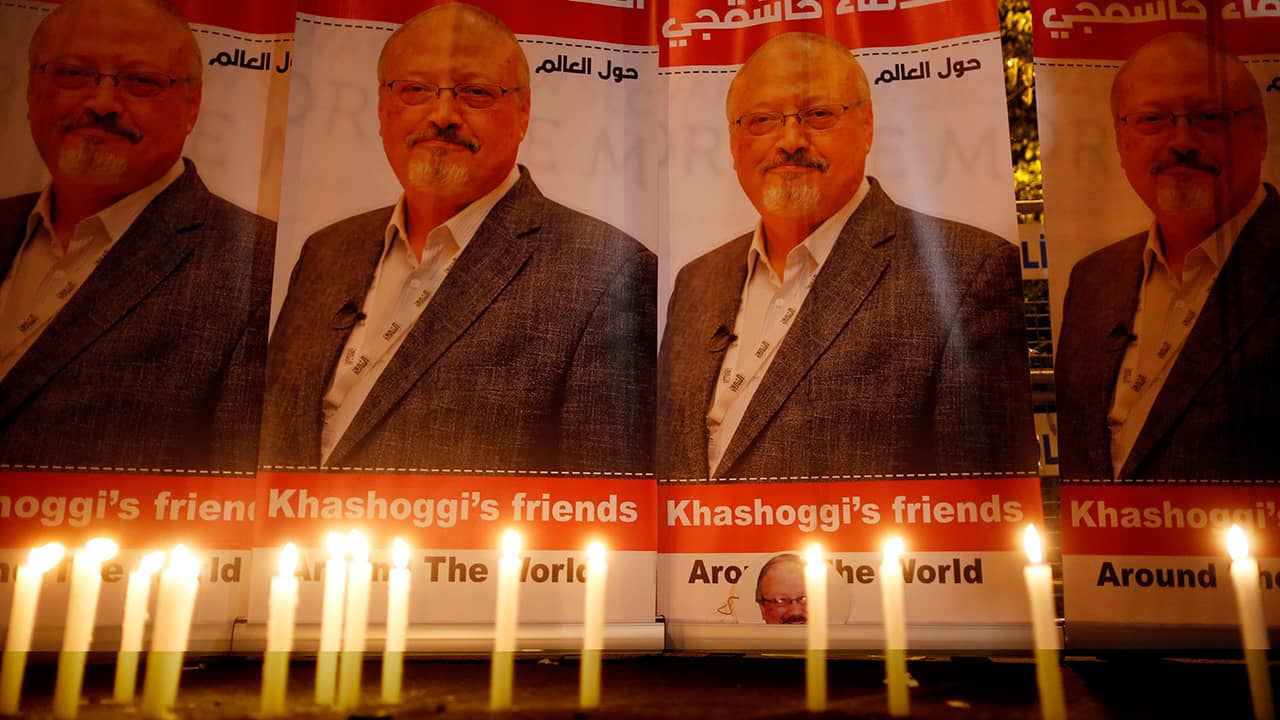 DUBAI, United Arab Emirates — The killing of Washington Post columnist Jamal Khashoggi at the Saudi Consulate in Istanbul last year drew renewed scrutiny Tuesday to the kingdom, as his son and a U.N. investigator spoke out ahead of the anniversary of his death.

“The Crown Prince takes great pains to distance himself from the killing, creating layers after layers of officials and institutions between himself and the execution of Mr. Khashoggi, suggesting they are acting like a buffer. They are not…” — U.N. investigator Agnes Callamard

Saudi intelligence officials and a forensic doctor killed and dismembered Khashoggi on Oct. 2, 2018, just as his fiancée waited outside the diplomatic mission. Khashoggi, long a royal court insider, had been in self-imposed exile in the U.S. while writing critically of Saudi Crown Prince Mohammed bin Salman, son of the oil-rich nation’s King Salman.

While the crown prince recently told CBS’ “60 Minutes” he did not order the writer’s killing, U.S. lawmakers and U.N. investigator Agnes Callamard laid the blame for the slaying on the prince. For its part, Saudi Arabia says it is trying 11 people for the killing but few details about the case have been released.

Callamard spared no criticism of the Saudi royal.

“A ‘responsible’ Statesman should not have tolerated 12 months of disinformation and 12 months continuing policies of intolerance and repression that led to Mr Khashoggi murder,” Callamard wrote on Twitter.

She added: “The Crown Prince takes great pains to distance himself from the killing, creating layers after layers of officials and institutions between himself and the execution of Mr. Khashoggi, suggesting they are acting like a buffer. They are not. The identity of the killers and planners point to a far closer relationship between them and him than he is prepared to admit.”

One Officer Referred to Him as ‘The Sacrificial Animal’

There was no immediate reaction from Saudi Arabia to Callamard’s comments, though the kingdom rejected her exhaustive report on the case by alleging it contained unexplained “prejudice and bias.”

Khashoggi, 59, was a longtime royal court insider and editor in state-linked newspapers in Saudi Arabia. As a journalist, he covered the mujahideen fighters who fought the Soviet occupation of Afghanistan in the 1980s and later offered commentary on the 2011 Arab Spring.

But he described himself as worried by the rise of Prince Mohammed. He privately described the young prince in a text message to a friend as “a beast Pac-Man, the more victims he eats, the more he wants,” according to the U.N. report by Callamard.

But even in his columns for the Post, which the newspaper often translated into Arabic, Khashoggi kept up the criticism, noting the arrests of women’s rights activists even as Prince Mohammed and his father granted women the right to drive.

“We are being asked to abandon any hope of political freedom, and to keep quiet about arrests and travel bans that impact not only the critics but also their families,” Khashoggi wrote.

Needing paperwork to get married, Khashoggi was asked to return to the Saudi Consulate on Oct. 2, 2018. There, a team of Saudi intelligence officers and a forensic scientist trained in autopsy work waited for him. When he arrived, one officer referred to him as “the sacrificial animal,” the U.N. report said. FILE- In this Oct. 23, 2018 file photo, Saudi Crown Prince, Mohammed bin Salman, smiles as he attends the Future Investment Initiative conference, in Riyadh, Saudi Arabia. The killing of Washington Post columnist Jamal Khashoggi at the Saudi Consulate in Istanbul drew renewed scrutiny to the kingdom, as his son and a U.N. investigator spoke out Tuesday, Oct. 1, 2019, ahead of the anniversary of his death. (AP Photo/Amr Nabil, File)

Critics Have Noted the Role Geopolitics Has Played in the Case

Callamard’s report relied on surveillance recordings apparently made by Turkish spies who monitored the consulate. During the days before Saudi Arabia acknowledged Khashoggi’s killing, Turkish authorities routinely leaked details of the writer’s slaying to local media.

“The 15-member assassination squad that murdered Khashoggi inside Saudi Arabia’s Consulate in Istanbul and chopped his body into pieces served the interests of a shadow state within the kingdom’s government — not the Saudi state or people.” — Turkish President Recep Tayyip Erdogan

“The 15-member assassination squad that murdered Khashoggi inside Saudi Arabia’s Consulate in Istanbul and chopped his body into pieces served the interests of a shadow state within the kingdom’s government — not the Saudi state or people,” Turkish President Recep Tayyip Erdogan wrote in a column last weekend in the Post.

However, critics have noted the role geopolitics has played in the case — Turkey views itself as a rival to Saudi Arabia in the Muslim world while Erdogan’s government has been the world’s worst jailer of journalists in recent years, according to the Committee to Protect Journalists.

Khashoggi’s killing pushed U.S. lawmakers away from Saudi Arabia, with President Donald Trump, who took his first overseas trip to the kingdom, even saying at one point that it involved a “cover-up that was one of the worst in the history of cover-ups.”

“Bad deal — should have never been thought of, somebody really messed up,” Trump said three weeks after the columnists’ death. “Whoever thought of that idea is in big trouble — and they should be in big trouble.”

Trump, however, declined to stop arms deals to Saudi Arabia and floated the idea that the slaying was a “rogue” operation even before the kingdom began offering that as an explanation.

Prince Mohammed, speaking to “60 Minutes” in an interview aired on Sunday, repeatedly denied he was involved, though any major decision in the autocratic kingdom comes from its rulers.

“When a crime is committed against a Saudi citizen by officials, working for the Saudi government, as a leader I must take responsibility,” the crown prince said. “This was a mistake. And I must take all actions to avoid such a thing in the future.”

On Tuesday, Salah wrote on Twitter that he had “full confidence in the kingdom’s court in achieving justice for those who have murdered my father.”

“The enemies of our nation and his enemies in the East and West used his case to take advantage of my nation and leadership,” Salah wrote.

He added: “I will remain like Jamal Khashoggi loyal to my nation and its leadership.”