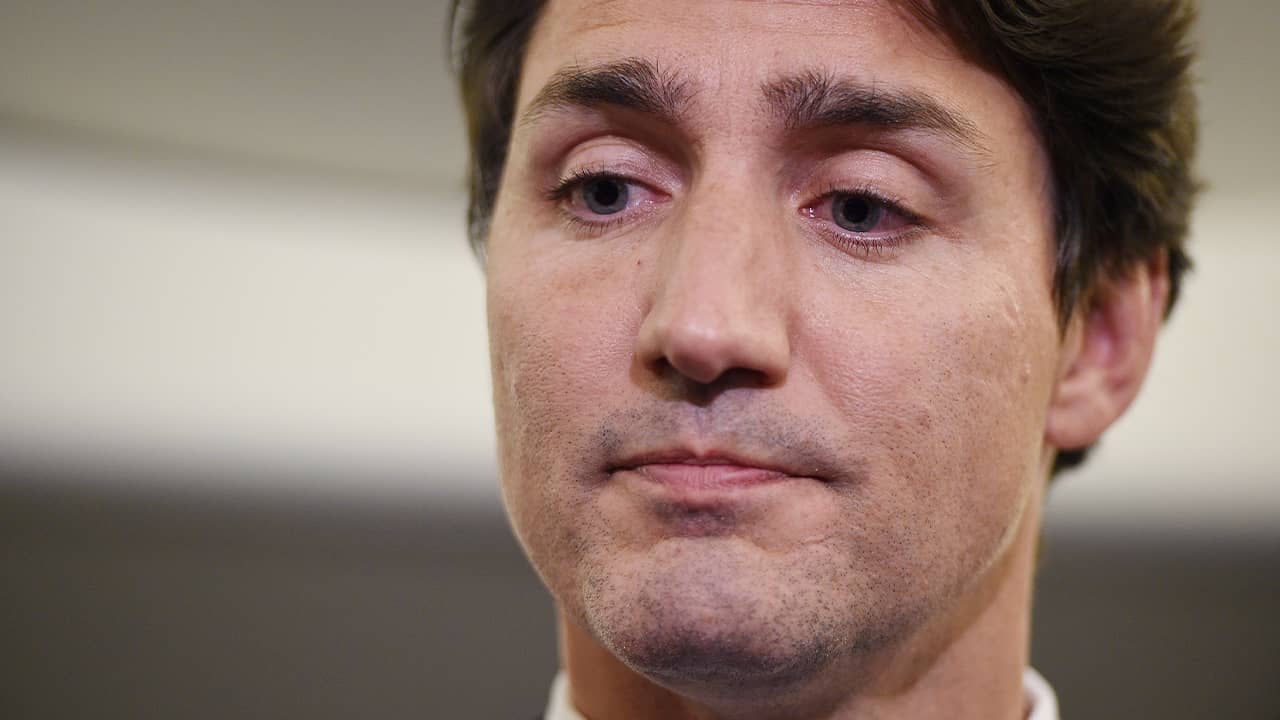 TORONTO — Prime Minister Justin Trudeau’s campaign moved to contain a growing scandal Thursday after a yearbook photo surfaced of him in brownface at a 2001 “Arabian Nights” costume party and two other similar incidents came to light.
With the election a month away, he apologized and begged Canadians to forgive him.
Time magazine published the photo on Wednesday, saying it was taken from the yearbook from the West Point Grey Academy, a private school in British Columbia where Trudeau worked as a teacher before entering politics. It shows the then-29-year-old Trudeau in a turban and robe with dark makeup on his hands, face and neck.
Trudeau, who launched his re-election campaign a week ago, said he should have known better.
“I’m pissed off at myself. I’m disappointed in myself,” he told reporters on his campaign plane. Trudeau is scheduled to take questions from the press later Thursday.
Trudeau is the latest in a string of politicians to get in trouble over racially offensive photos and actions from their younger days.

Earlier this year, Virginia Gov. Ralph Northam faced intense pressure to resign after a racist picture surfaced from his 1984 medical school yearbook page. He denied being in the picture but admitted wearing blackface as a young man while portraying Michael Jackson at a dance party in the 1980s. Since then, Virginia Attorney General Mark Herring has acknowledged wearing blackface in college, and Alabama Gov. Kay Ivey has apologized donning blackface during a college skit more than 50 years ago. None of them stepped down.


“I should have known better then, but I didn’t, and I am deeply sorry for it. I’m going to ask Canadians to forgive me for what I did. I shouldn’t have done that. I take responsibility for it. It was a dumb thing to do.” — Prime Minister Justin Trudeau

The photo of Trudeau was taken at the school’s annual dinner, which had an “Arabian Nights” theme that year, Trudeau said, adding that he was dressed as a character from “Aladdin.”
The prime minister said it was not the first time he darkened his face. He said he once did it while performing a version of Harry Belafonte’s “Banana Boat Song (Day-O)” during a talent show.
“I should have known better then, but I didn’t, and I am deeply sorry for it,” Trudeau said. “I’m going to ask Canadians to forgive me for what I did. I shouldn’t have done that. I take responsibility for it. It was a dumb thing to do.”
Global News also reported on a third instance, broadcasting a brief video of Trudeau in blackface while raising his hands in the air and sticking out his tongue. A spokeswoman for Trudeau’s Liberal Party said the footage was from the early 1990s. The Canadian TV network said it was not clear where the tape was made.
The furor could spell more trouble for Trudeau, who polls say is facing a serious challenge Oct. 21 from Conservative leader Andrew Scheer.
Scheer said his campaign team received the video of Trudeau from a concerned citizen and passed it on to a news outlet. Trudeau “is not fit to govern this country,” Scheer said. 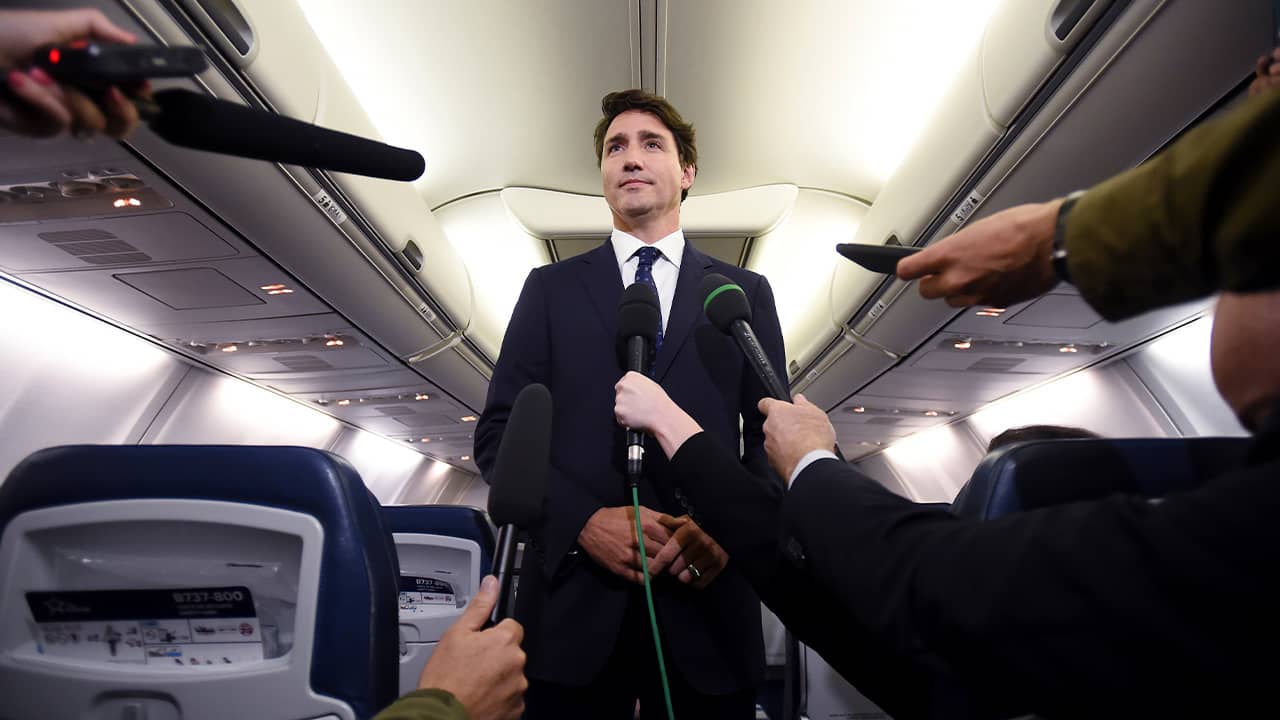 Canadian Prime Minister and Liberal Party leader Justin Trudeau makes a statement in regards to a photo coming to light of himself from 2001, wearing “brownface,” during a scrum on his campaign plane in Halifax, Nova Scotia, Wednesday, Sept. 18, 2019. (Sean Kilpatrick/The Canadian Press via AP)

His Quick Apology Did Not Stem the Criticism From Political Opponents

Scheer stammered when asked if there was anything in his past that he regrets. “I don’t claim to be a saint,” he said. “There’s nothing that would rise to this level.”
Trudeau champions diversity, multiculturalism and immigration and has been admired by liberals around the world for his policies in the Trump era, with Canada accepting more refugees than the U.S. His government has also strongly advocated free trade and has legalized cannabis.
But the 47-year-old son of the late Prime Minister Pierre Trudeau was already vulnerable following one of the biggest scandals in Canadian political history, which arose when Trudeau’s former attorney general said he improperly pressured her to halt the prosecution of a company in Quebec. Trudeau has said he was standing up for jobs, but the scandal rocked the government and led to resignations and a drop in his ratings earlier this year.
His quick apology did not stem the criticism from political opponents.
“I am deeply troubled by what this means to Canada. Young kids are not just going to see just one or two but multiple images of the prime minister mocking their lived reality,” said Leftist New Democrat leader Jagmeet Singh, who is a Sikh. “This is so hurtful to so many Canadians.”
Robert Bothwell, a professor of Canadian history and international relations at the University of Toronto, said he was “gobsmacked” by the development.
“We’ll just have to see how the party reacts,” he said. “I’m very curious to know how Liberal members of Parliament that are black will react.”

Race and Blackface Play a Much Bigger Role in U.S. Politics Than in Canada

He added: “The case has never been conclusively made that Justin is a person of substance. I mean, he may well be. But that impression is just not out there.”
Greg Fergus, a Liberal Member of Parliament who is black, said there was a lot of confusion and hurt in the black community but noted that the prime minister apologized.