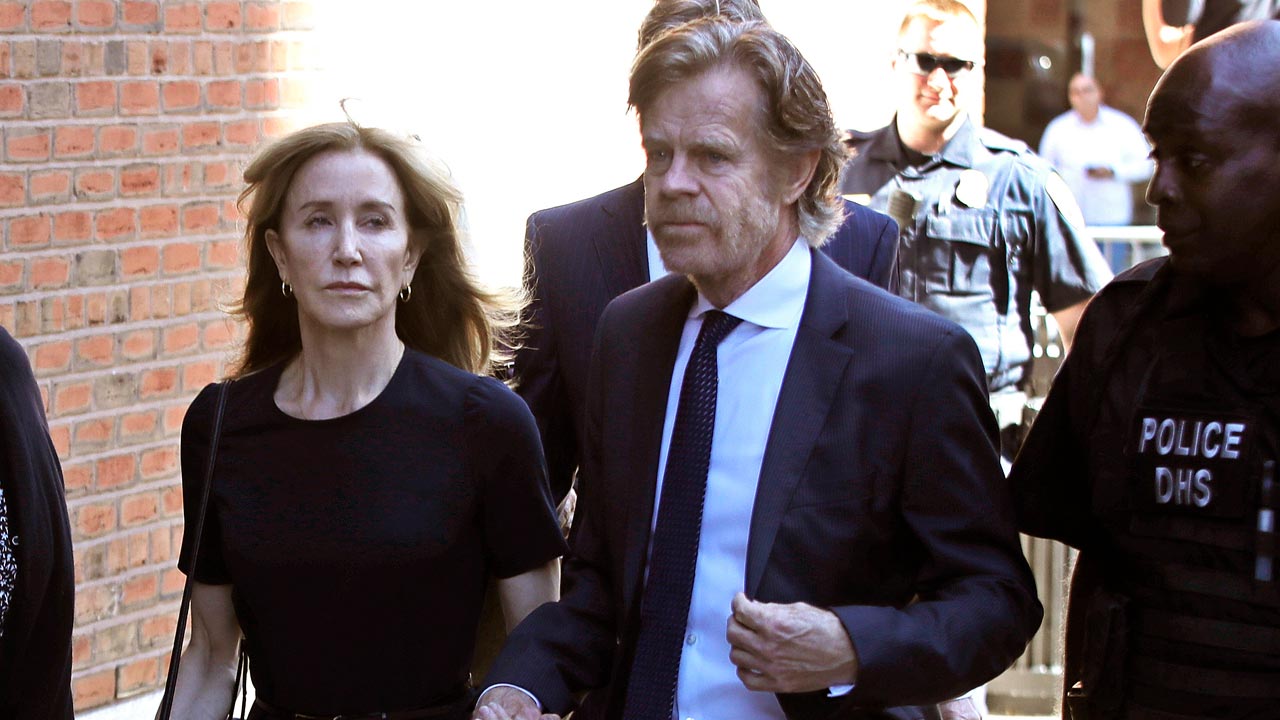 BOSTONa — “Desperate Housewives” star Felicity Huffman was sentenced Friday to 14 days in prison for paying $15,000 to rig her daughter’s SAT scores in the college admissions scandal that ensnared dozens of wealthy and well-connected parents.
Huffman, 56, became the first of 34 parents to be sentenced in the case. She was also given a $30,000 fine, 250 hours of community service and a year of supervised release.
Before sentencing, she tearfully described her daughter asking why Huffman didn’t trust her.
“I can only say I am so sorry, Sophia,” Huffman said. “I was frightened. I was stupid, and I was so wrong. I am deeply ashamed of what I have done. I have inflicted more damage than I could ever imagine. I now see all the things that led me down this road, but ultimately none of the reasons matter because at the end of the day I had a choice. I could have said no.”
A total of 51 people have been charged in the scheme, the biggest college admissions case ever prosecuted by the Justice Department.

In his argument for incarceration, Assistant U.S. Attorney Eric Rosen said Friday that prosecutors had no reason to doubt the rationale she offered — her fears and insecurities as a parent — for taking part in the scheme.
“But with all due respect to the defendant, welcome to parenthood,” Rosen said. “Parenthood is terrifying, exhausting and stressful, but that’s what every parent goes through. … What parenthood does not do, it does not make you a felon, it does not make you cheat, in fact it makes you want to serve as a positive role model for your children.”
Huffman’s lawyer Martin Murphy argued that her crimes were less serious than those of her co-defendants, noting that she paid a low amount and that, unlike others, she did not enlist her daughter in the scheme.
“One of the key things the court should do is to impose a sentence that treats Ms. Huffman like other similarly situated defendants, not treat her more harshly because of her wealth and fame, or treat her more favorably because of her wealth and fame,” Murphy said.

The scandal has embroiled elite universities across the country, including Yale, Stanford, Georgetown and UCLA. It exposed the lengths to which parents will go to get their children into the “right” schools and reinforced suspicions that the college admissions process is slanted toward the rich.
Prosecutors said parents schemed to manipulate test scores and bribed coaches to get their children into elite schools by having them labeled as recruited athletes for sports they didn’t even play.
Huffman pleaded guilty in May to a single count of conspiracy and fraud as part of a deal with prosecutors.
Prosecutors had requested prison time to send the message that white-collar criminals can’t simply buy their way out of jail.
But her lawyers argued that Huffman was only a “customer” in a broader scheme orchestrated by others. In past cases involving cheating or academic fraud, they said, only the ringleaders went to prison.

Other Parents Scheduled for Sentencing

The case is seen as an indicator of what’s in store for other defendants. Over the next two months, nearly a dozen other parents are scheduled to be sentenced. Fifteen parents have pleaded guilty, while 19 are fighting the charges.
Among those contesting the charges are “Full House” actress Lori Loughlin and her fashion designer husband, Mossimo Giannulli, who are accused of paying to get their two daughters into the University of Southern California as fake athletes.
Former Stanford University sailing coach John Vandemoer is the only other person sentenced so far and received a day in prison. He admitted helping students get into Stanford as recruited athletes in exchange for $270,000 for his sailing program.
Huffman paid $15,000 to boost her older daughter Sofia’s SAT scores with the help of William “Rick” Singer, an admission consultant at the center of the scheme. Singer, who has pleaded guilty, allegedly bribed a test proctor to correct the teenager’s answers.
Authorities said Huffman’s daughter got a bump of 400 points from her earlier score on the PSAT, a practice version of the SAT.
The actress has said her daughter was unaware of the arrangement.

In a letter this month asking for leniency, Huffman said she carries “a deep and abiding shame” and recognizes that she broke the law and betrayed her family. She said she turned to the scheme after her daughter’s dreams of going to college and pursuing an acting career were jeopardized by her low math score.
“I honestly didn’t and don’t care about my daughter going to a prestigious college,” Huffman wrote. “I just wanted to give her a shot at being considered for a program where her acting talent would be the deciding factor.”
Prosecutors countered that Huffman was driven by “a sense of entitlement, or at least moral cluelessness, facilitated by wealth and insularity.”
“Millions of parents send their kids to college every year. All of them care as much she does about their children’s fortunes,” they said in court papers. “But they don’t buy fake SAT scores and joke about it (‘Ruh Ro!’) along the way.”
Huffman used the Scooby-Doo catchphrase in an email after her daughter’s high school tried to make her take the exam with its own proctor instead of one preferred by Singer.
Prosecutors have not said which colleges her daughter applied to with the fraudulent SAT score.
Huffman’s husband, actor William H. Macy, was not charged.
The amount Huffman paid is relatively low compared with other bribes alleged in the scheme. Some parents are accused of paying up to $500,000.

Will Fresno Council Support DACA? Vote at Next Meeting.