LACONA, Iowa — When President Donald Trump levied tariffs on China that scrambled global markets, farmer Randy Miller was willing to absorb the financial hit. Even as the soybeans in his fields about an hour south of Des Moines became less valuable, Miller saw long-term promise in Trump’s efforts to rebalance America’s trade relationship with Beijing.

“The farmer plays the long game. I look at my job through my son, my grandkids. So am I willing to suffer today to get this done to where I think it will be better for them? Yes.” — farmer Randy Miller

“The farmer plays the long game,” said Miller, who grows soybeans and corn and raises pigs in Lacona. “I look at my job through my son, my grandkids. So am I willing to suffer today to get this done to where I think it will be better for them? Yes.”

But the patience of Miller and many other Midwest farmers with a president they mostly supported in 2016 is being put sorely to the test.

The trigger wasn’t Trump’s China tariffs, but waivers the administration granted this month to 31 oil refineries so they don’t have to blend ethanol into their gasoline. Since roughly 40% of the U.S. corn crop is turned into ethanol, it was a fresh blow to corn producers already struggling with five years of low commodity prices and the threat of mediocre harvests this fall after some of the worst weather in years.

“That flashpoint was reached and the frustration boiled over, and this was the straw that broke the camel’s back,” says Lynn Chrisp, who grows corn and soybeans near Hastings, Nebraska, and is president of the National Corn Growers Association.

“I’ve never seen farmers so tired, so frustrated, and they’re to the point of anger,” says Kelly Nieuwenhuis, a farmer from Primghar in northwest Iowa who said the waivers were a hot topic at a recent meeting of the Iowa Corn Growers Association. Nieuwenhuis said he voted for Trump in 2016, but now he’s not sure who he’ll support in 2020.

While Iowa farmer Miller saw Trump’s brinkmanship with China as a necessary gamble to help American workers, the ethanol waivers smacked to him of favoritism for a wealthy and powerful industry — Big Oil.

The Environmental Protection Agency last month kept its annual target for the level of corn ethanol that must be blended into the nation’s gasoline supply under the Renewable Fuel Standard at 15 billion gallons for 2020. That was a deep disappointment to an ethanol industry that wanted a higher target to offset exemptions granted to smaller refiners.

Those waivers have cut demand by an estimated 2.6 billion gallons since Trump took office, according to the Renewable Fuels Association. The oil industry, citing government data and other sources, disputes that figure and contends the waivers have not reduced ethanol consumption.

At least 15 ethanol plants already have been shut down or idled since the EPA increased waivers under Trump, and a 16th casualty came Wednesday at the Corn Plus ethanol plant in the south-central Minnesota town of Winnebago. The Renewable Fuels Association says the closures have affected more than 2,500 jobs.

Trump Said He Was Working up a Solution

The 31 new waivers issued this month came on top of 54 granted since early 2018, according to the association. While the waivers are intended to reduce hardships on small oil refiners, some beneficiaries include smaller refineries owned by big oil companies.

The administration knows it has a problem. U.S. Agriculture Secretary Sonny Perdue said at a farm policy summit in Decatur, Illinois, on Wednesday that Trump will take action to soften the effects. He would not say what the president might do or when, but said Trump believes the waivers by his EPA were “way overdone.”

In a tweet Thursday, Trump said he was working up a solution that would soothe both farmers and petroleum executives.

“The Farmers are going to be so happy when they see what we are doing for Ethanol,” Trump wrote, but gave no details. “It will be a giant package, get ready! At the same time I was able to save the small refineries from certain closing. Great for all!”

The Farmers are going to be so happy when they see what we are doing for Ethanol, not even including the E-15, year around, which is already done. It will be a giant package, get ready! At the same time I was able to save the small refineries from certain closing. Great for all!

In an interview later with Fox News Radio, Trump acknowledged that the “The farmers have been targeted” by China, both because of their support for his administration and his commitment to them, but maintained that his administration’s farm subsidies have negated the effect of the trade war.

Geoff Cooper, head of the renewable fuels group, said Perdue, EPA chief Andrew Wheeler and key White House officials have been discussing relief measures that could include reallocating the ethanol demand lost from the exempted smaller refiners to larger refiners that would pick up the slack. But many key details remain unclear, including whether the reallocation would apply in 2020 or be delayed until 2021. 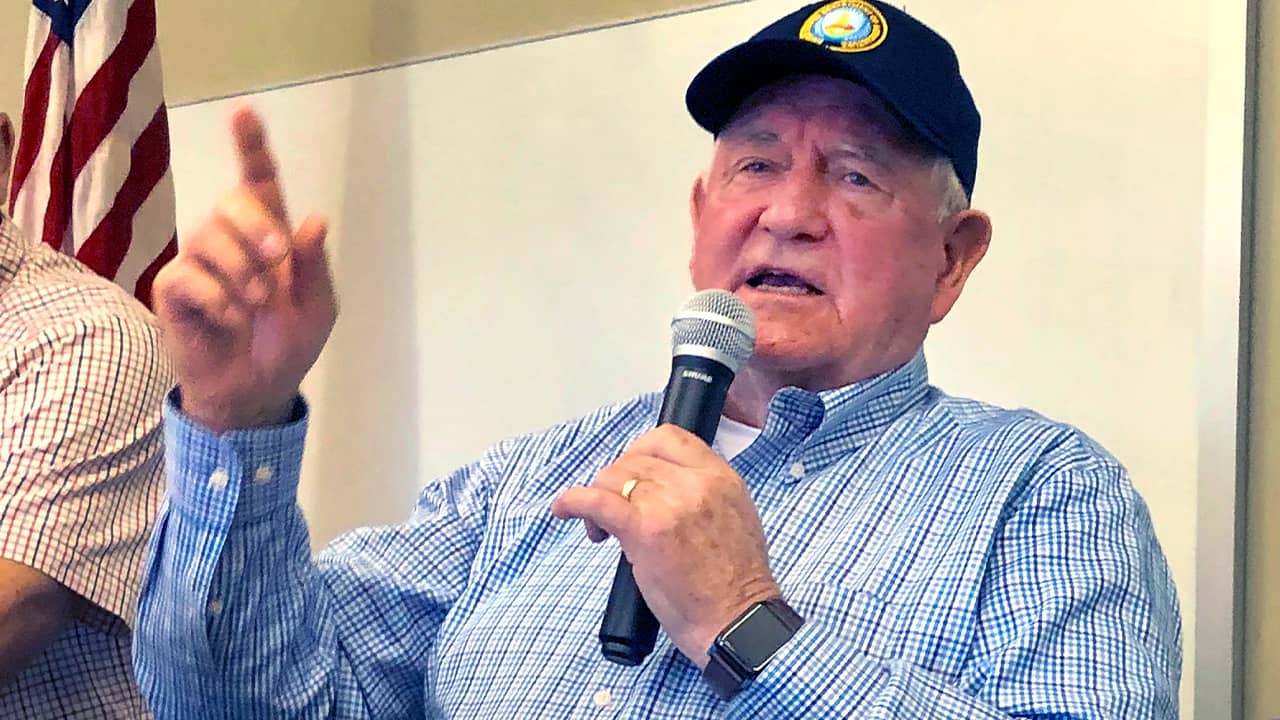 “Anything short of that redistribution or reallocation is not going to be well received by farmers, I’ll tell you that,” Cooper said.

“We hope the administration walks back from the brink of a disastrous political decision that punishes American drivers. Bad policy is bad politics.” — Frank Macchiarola, a vice president of the American Petroleum Institute

The White House referred questions to the EPA, where spokesman Michael Abboud said the agency would “continue to consult” on the best path forward.

Meanwhile, the oil industry has spoken out against some of the steps Trump has taken to try to appease the farmers, including allowing year-round sales of gasoline with more ethanol mixed in.

“We hope the administration walks back from the brink of a disastrous political decision that punishes American drivers. Bad policy is bad politics,” Frank Macchiarola, a vice president of the American Petroleum Institute, an oil industry lobbying group, said in a statement.

Another example of the tensions came last week when the Agriculture Department pulled its staffers out of the ProFarmer Crop Tour, an annual assessment of Midwest crop yields, in response to an unspecified threat. The agency said it came from “someone not involved with the tour” and Federal Protective Services was investigating.

Despite farmers’ mounting frustrations, there’s little evidence so far that many farmers who backed Trump in 2016 will desert him in 2020. Many are still pleased with his rollbacks in other regulations. Cultural issues such as abortion or gun rights are important to many of them. And many are wary of a Democratic Party they see as growing more liberal.

Miller, too, says he’s still inclined to support Trump in the next election.

Though Trump has inserted new uncertainty into Miller’s own financial situation, he believes the president has been good for the economy as a whole. And as a staunch opponent of abortion, he sees no viable alternatives in the Democratic presidential field.

Chrisp, too, says he doesn’t see an acceptable Democratic alternative. Still, he cautioned Republicans against taking farmers for granted.

“We’re not a chip in the political game, though I’m certain there are folks who are political strategists who view us that way, but it’s not the case,” he said.

Brian Thalmann, who farms near Plato in south-central Minnesota and serves as president of the Minnesota Corn Growers Association, confronted Perdue at a trade show this month about Trump’s recent statements that farmers are starting to do well again.

Thalmann, who voted for Trump in 2016, said this week that he can’t support him at the moment. He said farmers have worked too hard to build up markets and the reputation of American farm products and “I can’t see agriculture getting dragged down the path it currently is.”