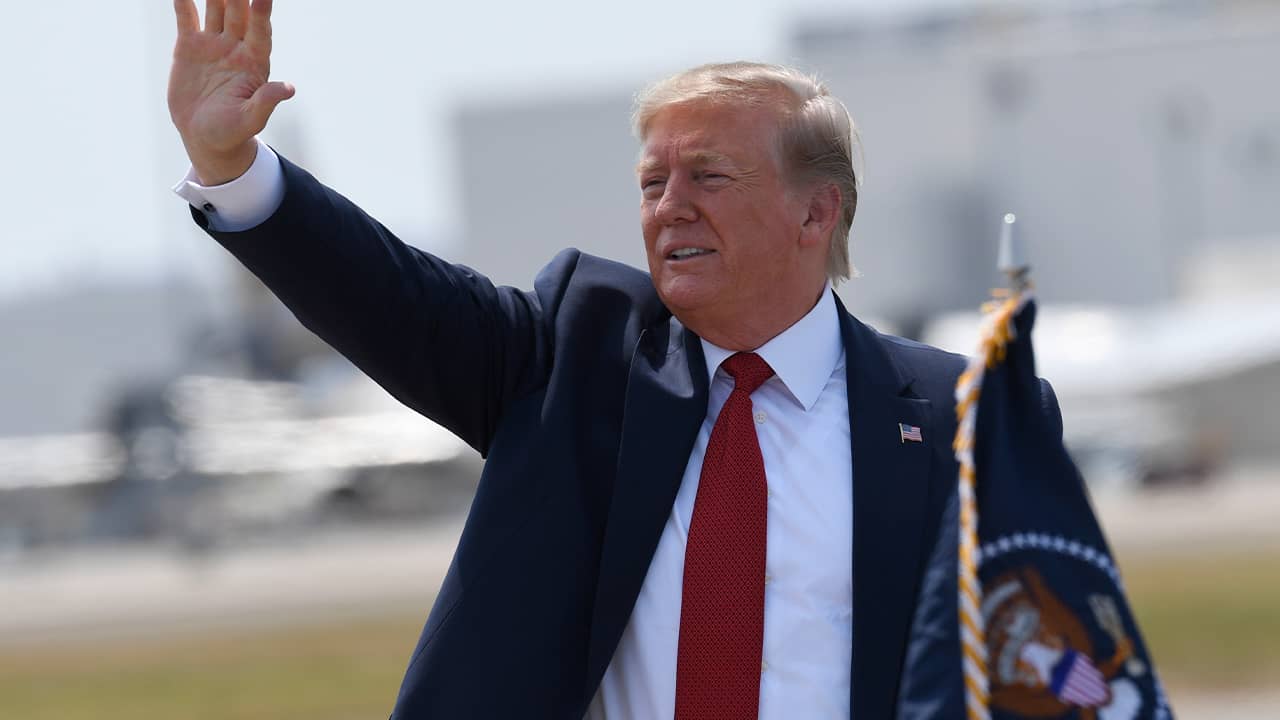 NEW YORK — About 6 in 10 Americans disapprove of President Donald Trump’s overall job performance, according to a new poll released Thursday by The Associated Press-NORC Center for Public Affairs Research, which finds some support for the president’s handling of the U.S. economy but gives him weak marks on other major issues. 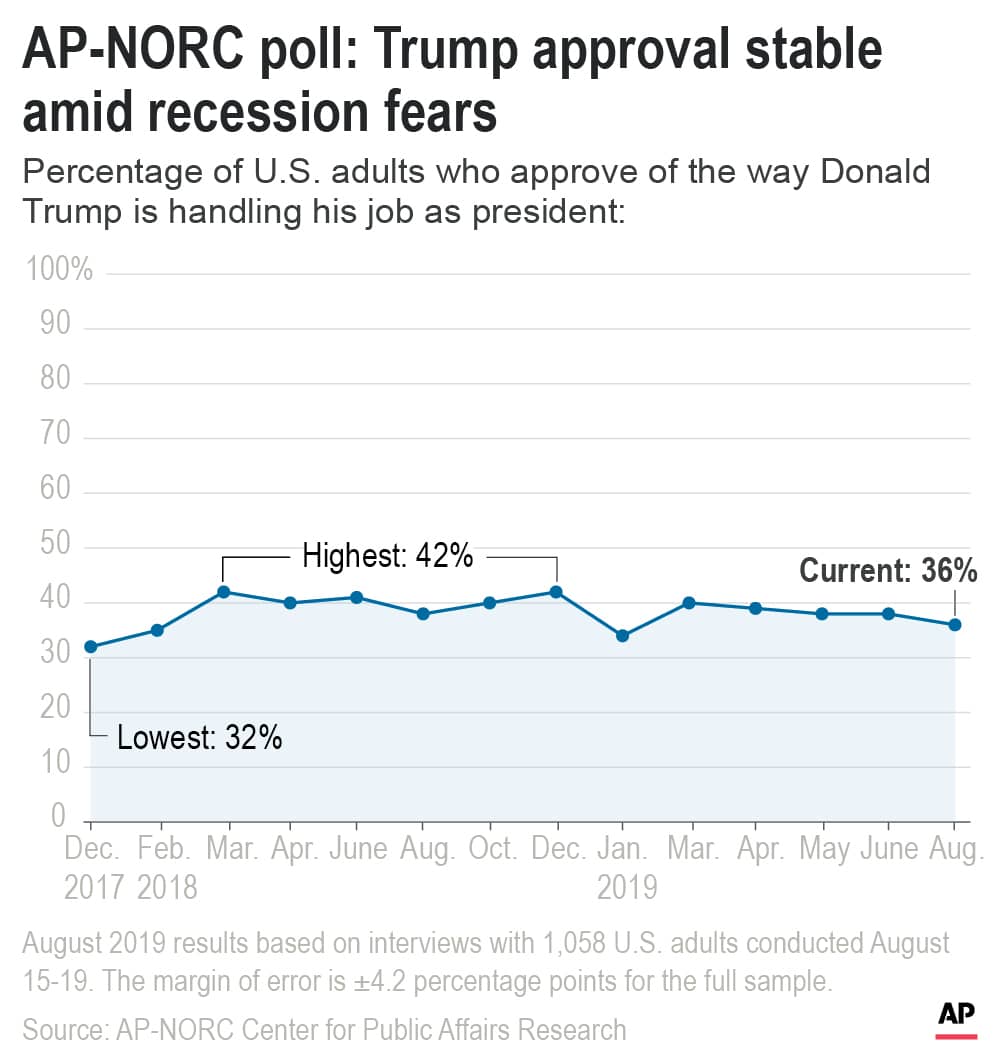 The new survey was conducted shortly after back-to-back mass shootings in Texas and Ohio left dozens dead and renewed calls from Americans for answers from their elected officials. Trump pledged immediate action in the immediate aftermath of the attacks but has since shifted back and forth on whether to push for stronger background checks on people seeking to buy guns.
“He does whatever’s politically expedient. He’s awful,” said 60-year-old Robert Saunders, a retired police officer from New Jersey who’s not registered with either major political party and vowed not to vote for Trump in 2020.
According to the poll, 36% approve of Trump on gun policy, while 61% disapprove, numbers that mirror his broader approval rating.
In response to the shootings, Trump said that he would pursue policy options with Senate Majority Leader Mitch McConnell and that he would like to see “very meaningful background checks.” Earlier this week, however, Trump said the U.S. already has significantly strict background checks in place and that many of his supporters are gun owners. On Wednesday, however, he again backed tighter background checks while speaking to reporters at the White House.
Seven in 10 Republicans express approval of Trump’s handling of gun policy in the new poll, among his lowest ratings from the GOP. Self-identified moderate and liberal Republicans were slightly less likely than conservative ones to express approval, 64% versus 74%.
Beyond guns, Trump remains overwhelmingly popular within his own party.

Significantly More Americans Approve of Trump’s Handling of the Economy

Nearly 8 in 10 Republicans approve of Trump’s overall job performance, while 20% disapprove. As has been the case for his entire presidency, Democrats overwhelmingly oppose his leadership: 94% of Democrats disapprove in the new survey.
Independents remain decidedly low on Trump as well, with about two-thirds disapproving of Trump’s performance. 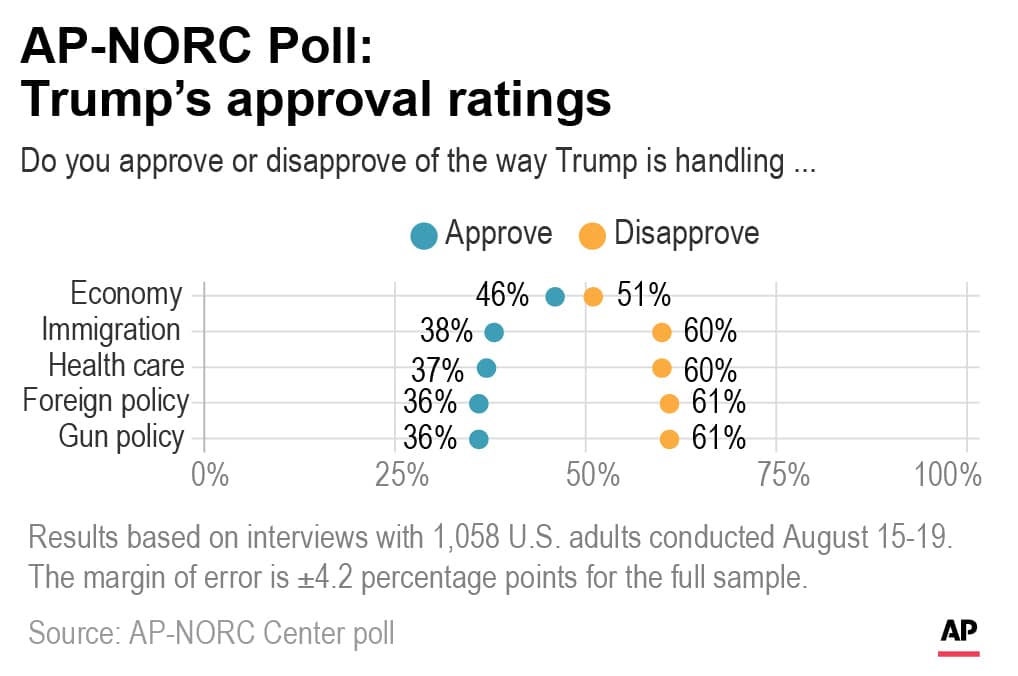 Trump Rattled the Stock and Bond Markets This Month

Amid regular distractions from the president’s social media feed, Trump’s team has worked to highlight rising retail sales and the solid labor market with its 3.7% unemployment rate as sources of strength. The U.S. economy appears to be showing vulnerabilities after more than 10 years of growth, however. Factory output has fallen and consumer confidence has waned as Trump has ramped up his trade fight with China.
Trump rattled the stock and bond markets this month when he announced plans to put a 10% tax on $300 billion worth of Chinese imports. The market reaction suggested a recession might be on the horizon and led Trump to delay some of the tariffs that were scheduled to begin in September, though many others remain.
“The economy is doing OK, but he’s doing a horrible job for the country,” said 67-year-old John Sollenberger, of Philadelphia.
He said he left the Republican Party after Trump’s rise and is now a registered independent.
“To me, it’s the vitriol that comes out of him,” Sollenberger explained. “He’s obviously a racist. He’s anti-immigrant. He foments discontent with so many people it doesn’t matter what the economy’s doing really.”
Those who remain in the Republican Party do not share the negative assessment.
Greg Traylor, a 53-year-old small businessman from North Canton, Ohio, acknowledged that Trump is “rough around the edges,” but he praised his work on immigration and his support for Israel. On the economy, Traylor cheered Trump’s hard-line stance with China, while acknowledging it may cause some short-term pain.
“He’s got balls of steel,” Traylor said.