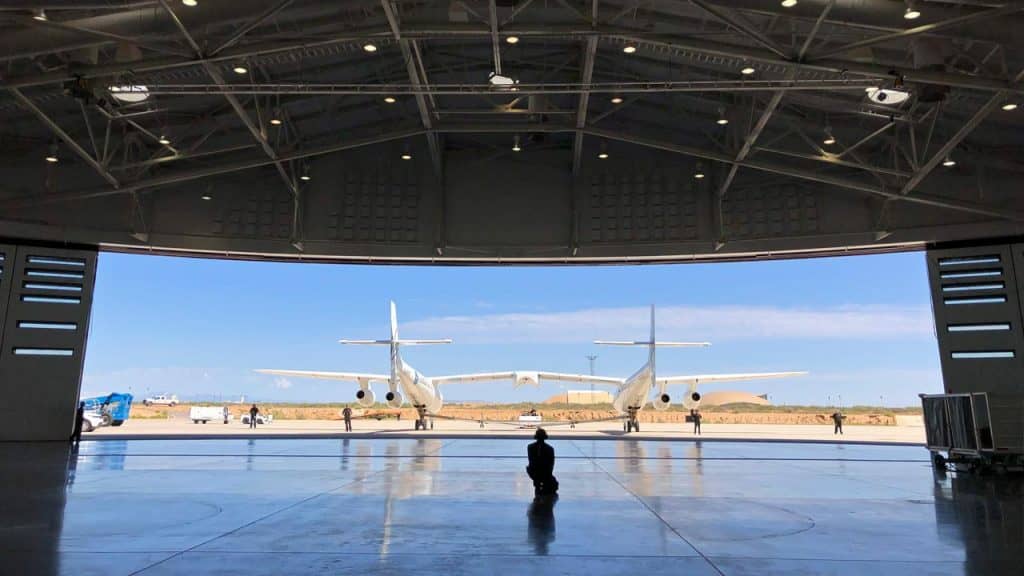 UPHAM, N.M. — Spaceport America is no longer just a shiny shell of hope that space tourism would one day launch from this remote spot in the New Mexico desert.
The once-empty hangar that anchors the taxpayer-financed launch and landing facility has been transformed into a custom-tailored headquarters where Virgin Galactic will run its commercial flight operations.
The interior spaces unveiled Thursday aim to connect paying customers with every aspect of the operation, providing views of the hangar and the space vehicles as well as the banks of monitors inside mission control.

Two levels within the spaceport include mission control, a preparation area for pilots and a lounge for customers and their friends and families, with each element of the fit and finish paying homage to either the desert landscape that surrounds the futuristic outpost or the promise of traveling to the edge of space.


Just how soon customers will file into Virgin Galactic’s newly outfitted digs for the first commercial flights to space has yet to be determined.
From hotel rooms to aircraft cabins, the Virgin brand touts its designs for their focus on the customer experience. Spaceport is no different.
A social hub includes an interactive digital walkway and a coffee bar made of Italian marble. On the upper deck, shades of white and gray speak to Virgin Galactic’s more lofty mission.
Company officials say the space is meant to create “an unparalleled experience” as customers prepare for what Virgin Galactic describes as the journey of a lifetime.

Just how soon customers will file into Virgin Galactic’s newly outfitted digs for the first commercial flights to space has yet to be determined. A small number of test flights are still needed.
“We were the first company to fly a commercial space ship to space with somebody in the back who was not a pilot — first time that somebody like that has been able to get out of their seats and float around the cabin,” Virgin Galactic CEO George Whitesides said. “So it’s happening. We have a bit more work to do before we get to commercial service.”
Billionaire Richard Branson, who is behind Virgin Galactic, and former New Mexico Gov. Bill Richardson, a Democrat, first pitched the plan for the spaceport nearly 15 years ago.
There were construction delays and cost overruns. Virgin Galactic’s spaceship development took far longer than expected and had a major setback when its first experimental craft broke apart during a 2014 test flight, killing the co-pilot.
Critics suggested the project was a boondoggle, but supporters argued that there were bound to be hard and sometimes costly lessons. 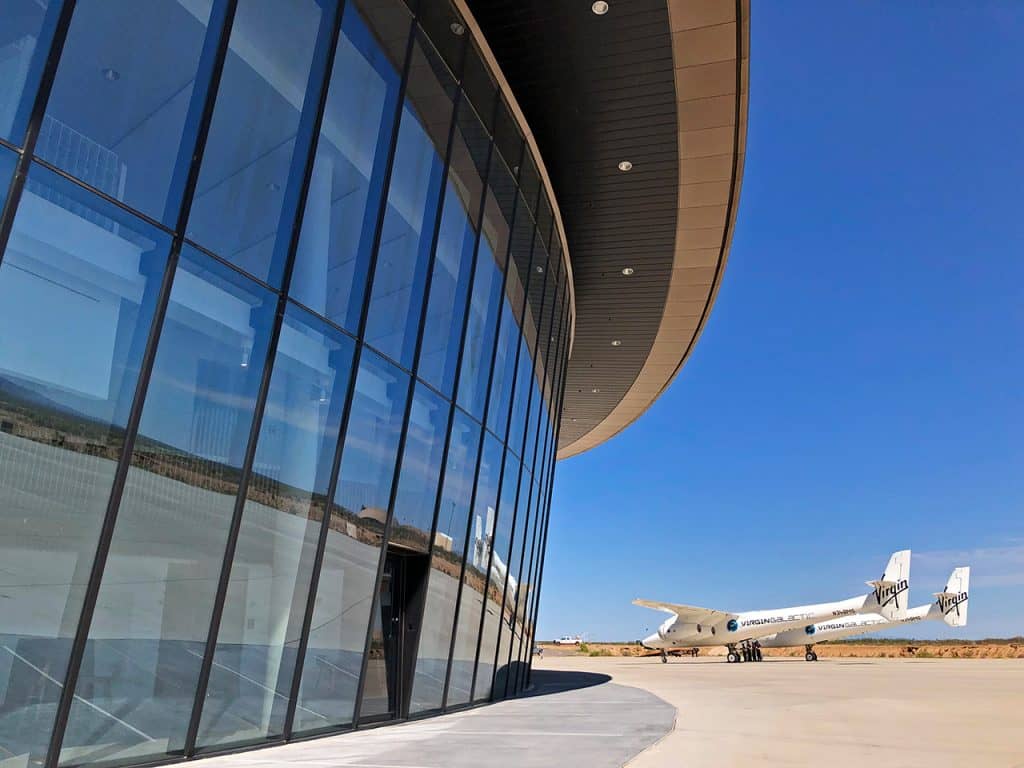 Virgin Galactic’s carrier plane makes its way across the apron in front of Spaceport America following a test flight over its new permanent home near Upham, New Mexico, on Thursday, Aug. 15, 2019. Virgin Galactic on Thursday unveiled two levels of its new digs at the spaceport, which includes a social hub where crew, pilots and customers and their families can mingle. (AP Photo/Susan Montoya Bryan)

Democratic state Sen. George Munoz has enduring concerns about the business model for commercial, low-orbit travel for passengers.
“You can have all the money in the world and come back and say, ‘Was my 30 seconds of fame worth that risk?'” he said.
Munoz says New Mexico’s anticipated return on investment in terms of jobs and visitors is still overdue, with more than $200 million in public funds spent on Spaceport America in cooperation with Virgin Galactic as the anchor tenant.
At the facility Thursday, the carrier plane for Virgin’s rocket-powered passenger ship made a few passes and touch-and-goes over a runway.


“New Mexico is on track to become one of the very few places on this beautiful planet which regularly launches humans to space,” — Virgin Galactic Chief Pilot Dave Mackay
Behind the spaceport’s signature wall of curved glass, mission control sits on the second floor with an unobstructed view of the runway and beyond.
There’s also space behind two massive sliding doors to accommodate two of Virgin Galactic’s carrier planes and a fleet of six-passenger rocket ships.

Virgin Galactic posted on social media earlier this week that its main operating base was now at the spaceport. And Branson said the wing of Virgin’s next rocket ship has been completed.
Chief Pilot Dave Mackay said the crew in the coming days will fly simulated launch missions to ensure in-flight communications and airspace coordination work as planned. The pilots also will be familiarizing themselves with New Mexico’s airspace and landmarks.
“New Mexico is on track to become one of the very few places on this beautiful planet which regularly launches humans to space,” Mackay said.
Whitesides said that once the test flights are complete, commercial operations can begin. He envisions a fundamental shift in humanity’s relationship with space, noting that fewer than 600 people ever have ventured beyond the Earth’s atmosphere.
“We’re going to be able to send way more than that to space from this facility here,” he said. “In another 15 years, I really hope that we’ve had thousands of people go.”

About 600 people have reserved a seat, according to the company, at a cost of $250,000 a ticket.
That buys them a ride on the winged rocket ship, which is dropped in flight from the carrier airplane. Once free, it fires its rocket motor to hurtle toward the boundary of space before gliding back down.
The latest test flight reached an altitude of 56 miles (90 kilometers) while traveling at three times the speed of sound. 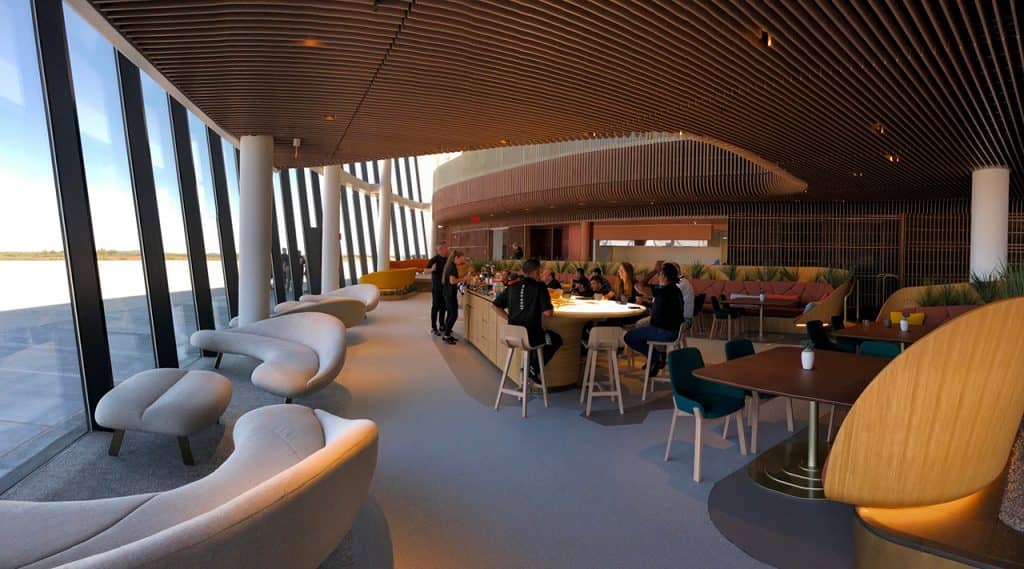 Virgin Galactic employees gather at the coffee bar that serves as the heart of the company’s social hub where they will meet with customers and their families at Spaceport America once commercial operations begin near Upham, New Mexico, on Thursday, Aug. 15, 2019. Virgin Galactic unveiled some of the interior spaces of the custom-tailored terminal Thursday, saying the designs are aimed at connecting the customers with operations as they prepare for their suborbital flights. (AP Photos/Susan Montoya Bryan)