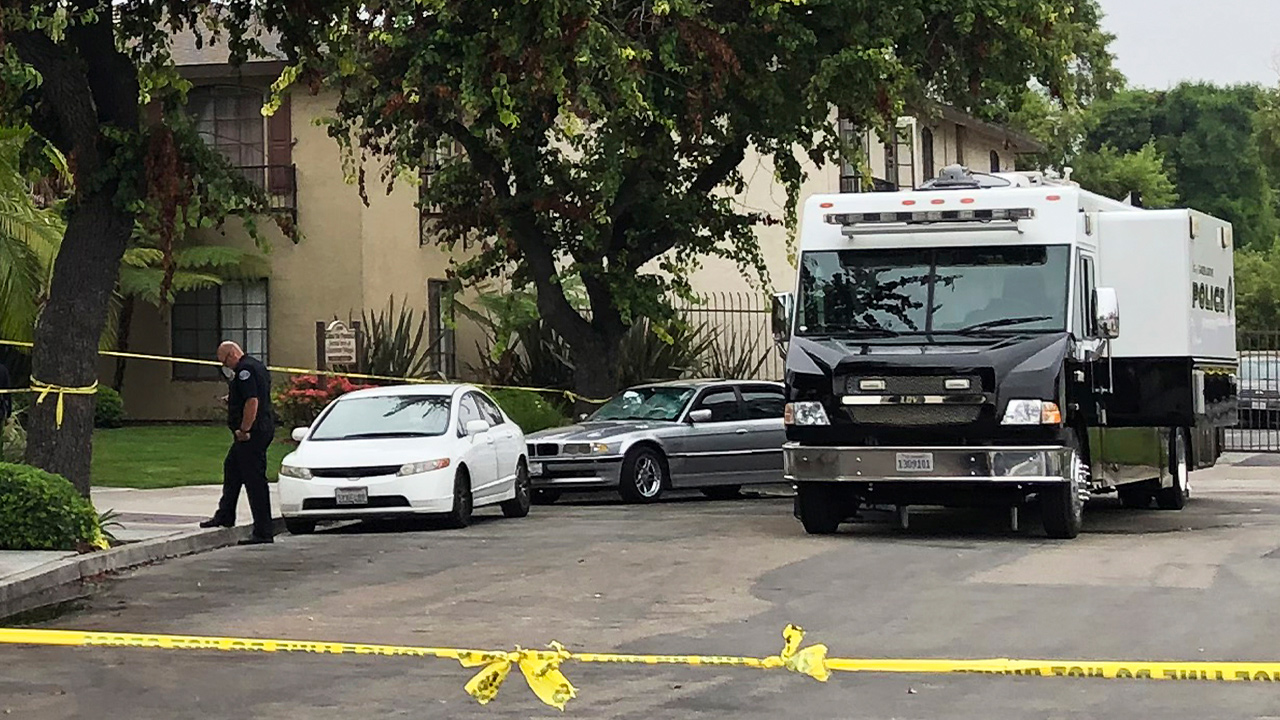 GARDEN GROVE — The video is chilling. A man walks into an office, steps up to a woman at a desk and pulls two large knives and savagely attacks her. She is stabbed at least a dozen times, shielding herself with her hands before finally cowering in a corner with a barrier of two office chairs.


“He remained violent with us through the night. He never told us why he did this.” — Garden Grove Police Chief Tom DaRe
The woman survived but police say four men died and a second person was wounded in a bizarre Southern California rampage. On Friday, Zachary Castaneda was expected in court to answer charges that he slashed, stabbed and robbed his way through Garden Grove and Santa Ana, robbing some half-dozen small businesses, killing some people and letting others live seemingly at random.
The motive for Wednesday’s attacks remained mysterious, although court records show Castaneda was a gang member with a long and violent criminal history of assault and weapon and drug crimes.
The 33-year-old Garden Grove man was covered in blood when he was taken into custody after walking out of a 7-Eleven store and dropping a knife and a gun that he’d cut from the belt of a security guard he’d just killed.
“He could have injured or killed many other innocent people” if the rampage had continued, Garden Grove Police Chief Tom DaRe said Thursday.
Castaneda was kept in restraints as detectives tried to interview him.
“He remained violent with us through the night,” DaRe said. “He never told us why he did this.”

Criminal History Dates Back to 2004

Authorities have no indication that the two-hour rampage was a hate crime, DaRe said.
Castaneda’s criminal history dates back to 2004 and includes prison stints for possession of methamphetamine for sale while armed with an assault rifle and car theft. He served about two years of a four-year sentence and was released on probation in January 2016, according to the California Department of Corrections and Rehabilitation.
His arrest last month on charges of having a concealed dagger and drug charges came while he was on bail for a June arrest on charges of street gang vandalism. He has pleaded not guilty to those charges.
Castaneda was convicted in 2009 of spousal abuse and paroled after serving about a year in prison, corrections officials said.
Whitney said police had previously gone to Castaneda’s apartment to deal with a child custody issue. The suspect’s mother had been living with him and had once asked police how she could evict her son, Garden Grove police Lt. Carl Whitney said.
Court records show his wife, Yessica Rodriguez, sought a restraining order last year after she said Castaneda threw a beer can at her 16-year-old daughter. She said she also sought an order against him in 2009 when he broke her arm during a fight.
Rodriguez filed for divorce earlier this year, court records show, and has custody of two sons, ages 7 and 12. 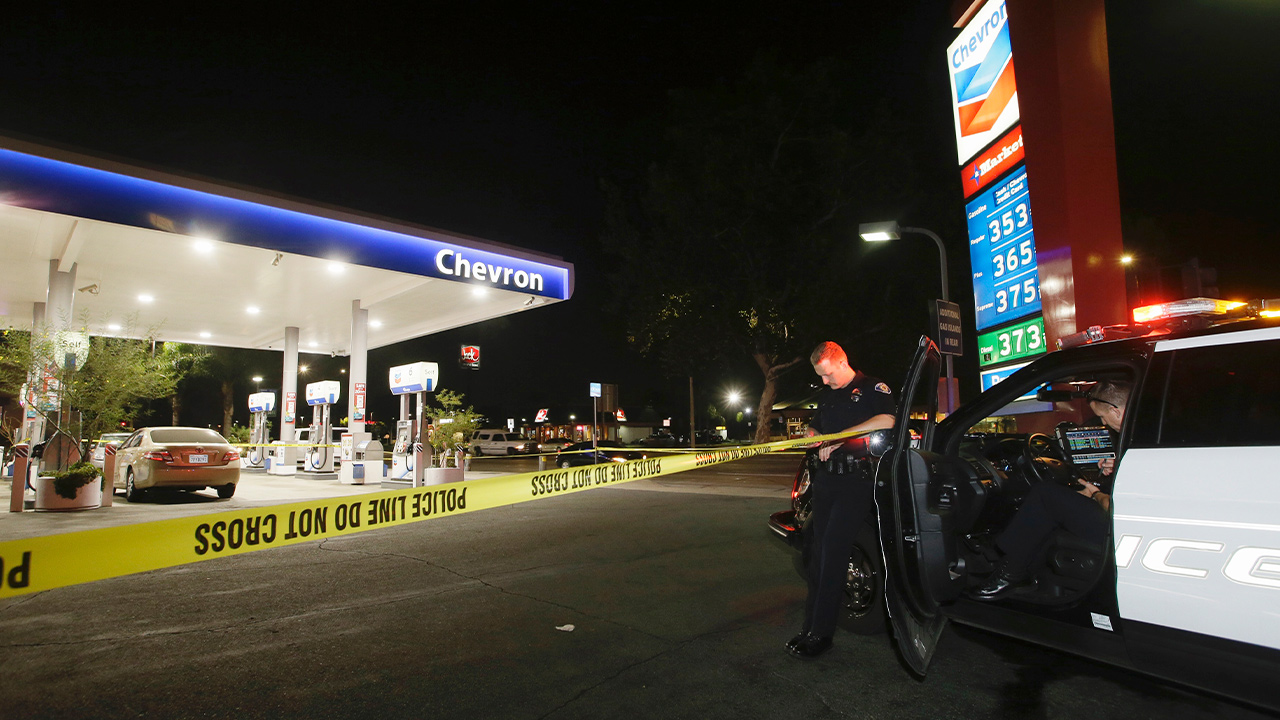 It wasn’t immediately known if Castaneda, 33, had a lawyer who could speak on his behalf for the current allegations. Public defenders who previously represented him did not immediately return messages seeking comment.
Police believe Castaneda killed two men at the apartment complex where he lived about an hour after burglarizing their unit, then robbed businesses as he drove through town, including the Garden Grove insurance agency where the 54-year-old woman was stabbed. She was hospitalized in critical but stable condition, police said.
Police released surveillance video of the attack and said other attacks also were caught on camera.
Castaneda is believed to also have robbed a check-cashing business next door to the insurance agency but left the woman there unharmed, authorities said.
Yesenia Torres, 34, of Santa Ana was the lone employee on duty. She had just completed a loan transaction and handed over $200 to a woman when a man who had been pacing back and forth in the store walked up and told the woman in Spanish: “This is a robbery. The insurance will pay you back,” Torres told the Los Angeles Times.
The man had one hand in his pocket but Torres didn’t see a weapon, she said.
Later, a man pumping gas at a Chevron station was attacked without warning or reason and slashed so badly that his nose was nearly severed, police said. He was in stable condition.
One of the men fatally wounded at Castaneda’s apartment building was a hard-working immigrant originally from Romania, his son said.

Erwin Hauprich said his father, Helmuth Hauprich, 62, called him Wednesday and told him his Garden Grove apartment had been burglarized. His passport, green card, sword collection and even a dining table were taken.


“I saved myself because I was in the car. Thank God I am alive.” — Dona Beltran, owner of a bakery in Garden Grove
Erwin Hauprich said his father never called back and he went to check on him after hearing there had been a stabbing at the complex.
He learned that his father died at a hospital. His father’s roommate was killed in the apartment. Police didn’t name him but said he was 63 years old.
Also killed were the 7-Eleven security guard, Robert Parker, 58, of Orange, and an employee at a nearby Subway sandwich shop, identified by coroner’s officials as Pascual Rioja Lorenzo, 39, of Garden Grove.
The owner of a bakery in Garden Grove wasn’t harmed. Dona Beltran was in her car charging her mobile phone when she saw a tattooed man get out of a Mercedes and enter her store.
She followed him inside to offer help but saw him trying to open the cash register. She ran out and yelled that she was being robbed before taking refuge in a nearby dental office.
The robber ended up taking the store’s cash registers with him, which had about $200, she said.
“I saved myself because I was in the car,” she said in Spanish on Thursday. “Thank God I am alive.”
Related Topics:attacksGarden GroveknivespoliceSanta AnastabbedVideo
Up Next