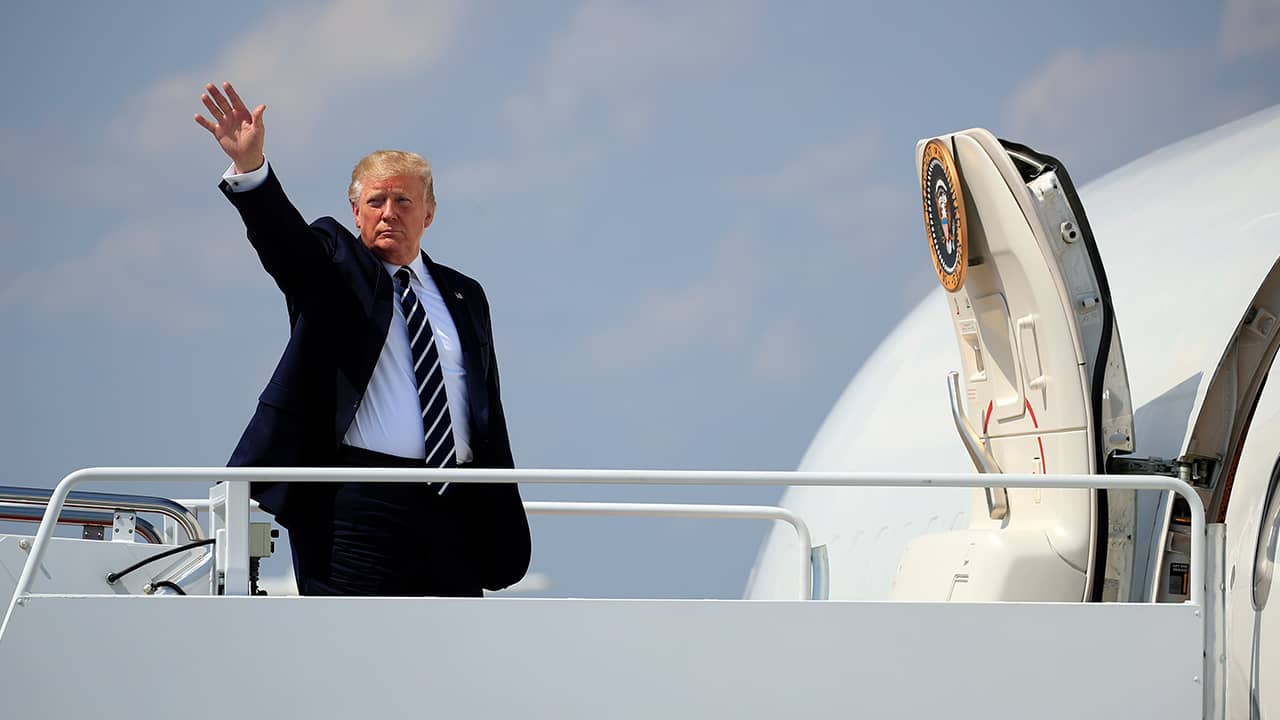 WASHINGTON — Facing growing accusations of racism for his incendiary tweets, President Donald Trump lashed out at his critics Monday and sought to deflect the criticism by labeling a leading black congressman as himself racist.
In the latest rhetorical shot at lawmakers of color, Trump said his weekend comments referring to Rep. Elijah Cummings’ majority-black Baltimore district as a “disgusting, rat and rodent infested mess” where “no human being would want to live” were not racist. Instead, Trump argued, “if racist Elijah Cummings would focus more of his energy on helping the good people of his district, and Baltimore itself, perhaps progress could be made in fixing the mess.”

“His radical ‘oversight’ is a joke!” Trump tweeted Sunday.
After a weekend of attacks on Cummings, the son of former sharecroppers who rose to become the powerful chairman of the House Oversight and Reform Committee, Trump expanded his attacks Monday to include a prominent Cummings defender, the Rev. Al Sharpton, who was traveling to Baltimore to hold a press conference in condemnation of the president.
“Al is a con man, a troublemaker, always looking for a score,” Trump tweeted ahead of the news conference, adding that the civil rights activist and MSNBC host “Hates Whites & Cops!”
Sharpton fired back at the president in a tweet of his own, saying, “I do make trouble for bigots.”

Trump Swings Hard at Cummings and His Baltimore District

Trump appeared to dig a deeper hole even as a top White House aide sought to dismiss the controversy by describing Trump’s comments as hyperbole. Two weeks ago, Trump caused a nationwide uproar with racist tweets directed at four Democratic congresswomen of color as he looked to stoke racial divisions for political gain heading into the 2020 election.
Trump noted that Democratic presidential contender and Vermont Sen. Bernie Sanders had “recently equated” parts of Baltimore to a “third world country” in 2015 comments.
“I assume that Bernie must now be labeled a Racist, just as a Republican would if he used that term and standard,” Trump tweeted Monday.
Speaking in television interviews, acting chief of staff Mick Mulvaney said Trump was reacting in frustration to the Democrats’ unrelenting investigations and talk of impeachment. He said Trump swung hard at Cummings and his Baltimore district because he believes such Capitol Hill critics are neglecting serious problems back home in their zeal to unfairly undermine his presidency.
“I understand that everything that Donald Trump says is offensive to some people,” Mulvaney said. But he added: “The president is pushing back against what he sees as wrong. It’s how he’s done it in the past, and he’ll continue to do it in the future.”
Mulvaney, a former congressman, said he understood why some people could perceive Trump’s words as racist. 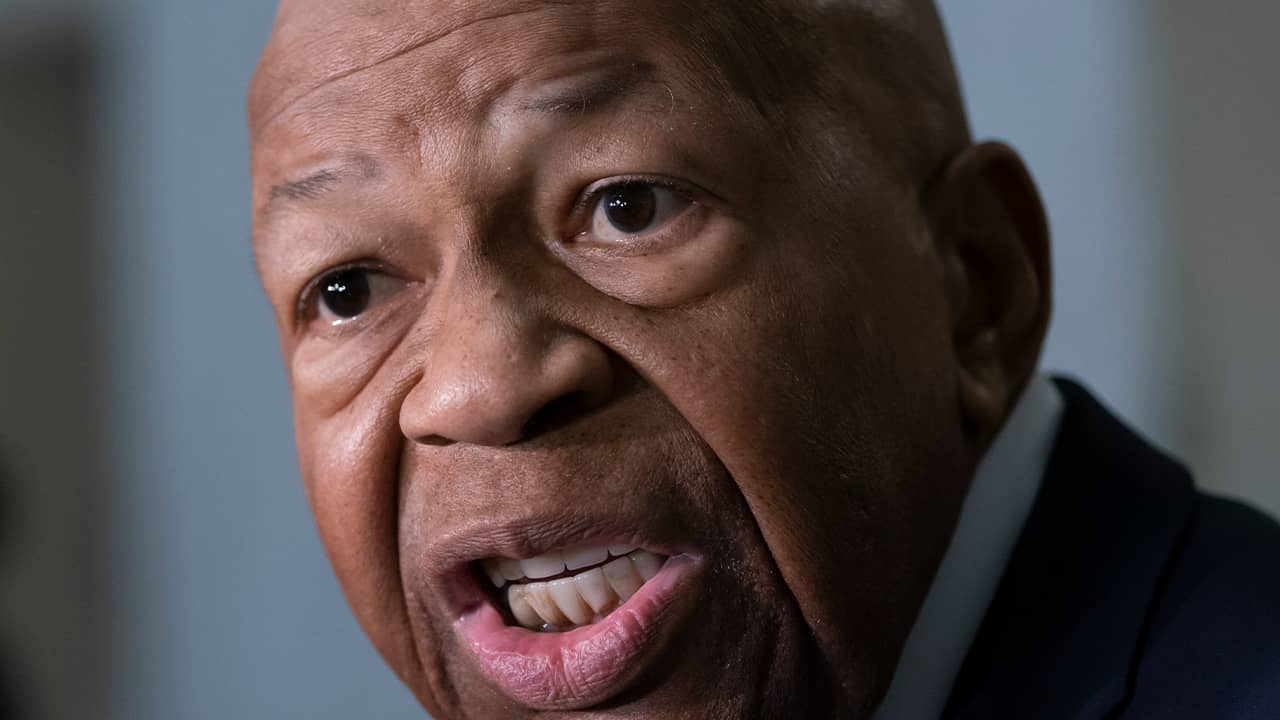 President Donald Trump says there was nothing racist about his weekend tweets that called the Baltimore-area congressional district of Rep. Elijah Cummings, pictured, a “rodent-infested mess” where “no human being would want to live.” (AP Photo/J. Scott Applewhite)

Mulvaney said Trump’s words were exaggerated for effect — “Does the president speak hyperbolically? Absolutely” — and meant to draw attention to Democratic-backed investigations of the Republican president and his team in Washington.
“Instead of helping people back home, they’re focusing on scandal in Washington D.C., which is the exact opposite of what they said they would do when they ran for election in 2018,” Mulvaney said, pointing at Democrats who now control the House.
He asserted that Trump’s barbs were a reaction to what the president considered to be inaccurate statements by Cummings about conditions in which children are being held in detention at the U.S.-Mexico border.
At a hearing last week, Cummings accused a top administration official of wrongly calling reports of filthy, overcrowded border facilities “unsubstantiated.”
“When the president hears lies like that, he’s going to fight back,” Mulvaney said.

Trump’s tweets Saturday also charged that Cummings’ district, which includes Johns Hopkins Hospital, the Social Security Administration and the national headquarters of the NAACP, is “considered the worst run and most dangerous anywhere in the United States.”
Condemnation followed from Democrats over the weekend, including some of the party’s presidential candidates. Statements from a spokesman for Maryland’s Republican governor and from the lieutenant governor defended Cummings’ district and its people.

Cummings has also drawn the president’s ire for investigations touching on his family members serving in the White House. His committee voted along party lines Thursday to authorize subpoenas for personal emails and texts used for official business by top White House aides, including Ivanka Trump and her husband, Jared Kushner.
Democratic presidential candidate Julián Castro said Trump was engaging in “racial priming.”
“Using this language and taking actions to try and get people to move into their camps by racial and ethnic identity. That’s how he thinks he won in 2016 and that’s how he thinks he’s going to win in 2020,” Castro said.
Earlier this month, Trump drew bipartisan condemnation following his call for Democratic Reps. Ilhan Omar of Minnesota, Alexandria Ocasio-Cortez of New York, Ayanna Pressley of Massachusetts and Rashida Tlaib of Michigan to get out of the U.S. “right now.” He said if the lawmakers “hate our country,” they can go back to their “broken and crime-infested” countries.

All four lawmakers of color are American citizens and three of the four were born in the U.S. The House later voted largely along party lines to condemn his “racist comments.”
Related Topics:BaltimorecriticismPresident Donald TrumpracistRep. Elijah Cummingstweets
Up Next