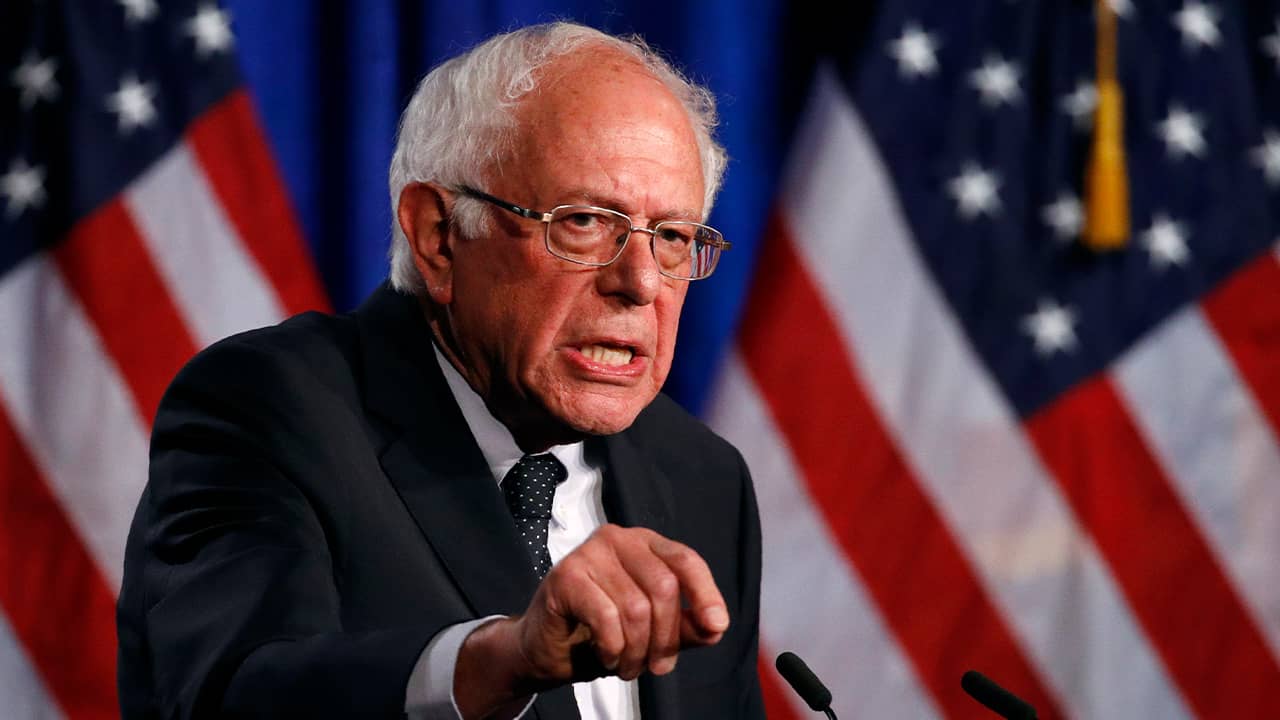 WASHINGTON — When Bernie Sanders wanted to preview a speech about his signature health care plan, “Medicare for All,” he did not opt for a traditional interview.
Instead, he made an appearance on “The 99,” his Democratic presidential campaign’s in-house livestreamed show, a controlled, decidedly on-message pro-Sanders program that streams on a variety of services including Twitch, a platform used primarily by gamers.
The makeshift studio for the show is in a room with a long wooden table, walls decorated with Sanders campaign signs, and tchotchkes including a Sanders action figure. Sanders sat down for an interview — with his campaign manager, Faiz Shakir.

“We are doing these livestreams, we are talking to you directly,” Shakir said. “One of the reasons is while we appreciate our friends in the elite media, they don’t often cover the issues that truly matter to working Americans.”
The livestream represents just one spoke in a communications network that his campaign, frustrated by the coverage he gets in traditional media, has built to exclusively promote the candidate’s worldview. Since Sanders announced his second bid for the presidency in February, the campaign has started not just a twice-weekly livestreaming show, but also a sleekly produced podcast, “Hear the Bern,” hosted by national press secretary Brihana Joy Gray.
On the first episode of the podcast, Gray described it as a “behind the scenes look at how campaigns work, how political movements grow and what motivates the man who has reintroduced big, transformative ideas into politics.”

Candidates have long sought outlets to appeal directly to supporters without a media filter, and none more effectively than President Donald Trump. But Sanders’ efforts have taken that approach a step further, and there’s some evidence that people are watching and listening. His campaign says that the streaming show they aired before and after the first Democratic presidential debate had more than 300,000 views.


“With the live show, we can actually have a conversation with people. It’s bringing our supporters into the conversation, but also to bring people who may disagree with us into the conversation.” — Josh Miller-Lewis, Sanders campaign digital director
“If you go on the premise that Bernie folks think they were boxed out of the mainstream party the last time around, I think the assumption that his folks made is they’ve just got to kind of build their own universe,” said Joel Payne, a Democratic strategist who worked on Hillary Clinton’s 2016 campaign.
Sanders’ campaign says he is to use the new platforms to anchor his base and to reach voters who may be disengaged with the political process currently but who could be animated by Sanders’ ideas and policies.

“This is different from a typical post on social media, which is putting out content. With the live show, we can actually have a conversation with people. It’s bringing our supporters into the conversation, but also to bring people who may disagree with us into the conversation,” said Josh Miller-Lewis, the campaign’s digital director.
In his second run for president, Sanders is finding that the attention he received in his run against Clinton is harder to come by in a field with two dozen candidates. By expanding Sanders’ already robust social media presence with streaming shows where they have outsize control offers a test of whether he has found a new way to break through.
“I think Bernie Sanders became accustomed to the level of news attention that a fresh face attacking the establishment normally gets and now thinks, (if) he got that attention in 2016, he should be getting it now, and, if not, there must be something wrong with the press,” said Kathleen Hall Jamieson, director of the University of Pennsylvania’s Annenberg Public Policy Center.

Discussing Whether Sanders ‘Too Consistent for Corporate Media’

His campaign also says it’s a long-range strategy that looks ahead to a general election matchup with President Donald Trump. Miller-Lewis says he believes that anyone who wants to defeat Trump in 2020 has to be able to “challenge Trump’s supremacy on digital platforms.”
In a recent episode of “The 99,” three top Sanders aides spent an hour discussing whether Sanders was “too consistent for corporate media,” at times dissecting individual headlines and stories they criticized.
Ari Rabin-Havt, Sanders’ chief of staff, argued that the media has a “bias for something new, for something exciting, for something salacious, and Bernie Sanders’ continual history of standing up for these issues over 40 years is not new and exciting for people.”


Related Story: Sanders Set to Mount Vigorous Defense of 'Medicare for All'

In that way, his consistency may have hurt his desire to get more attention. “News is something that’s new, and the best thing that Bernie has going for him is that he’s consistent, that he’s pushing for what he’s always pushed for,” said Rebecca Katz, a New York-based Democratic strategist. “The problem that Bernie has going for him is he’s not making news, he’s repeating news.”
Joe Trippi, a Democratic consultant who managed Howard Dean’s 2004 presidential campaign, has heard the kind of complaints the Sanders campaign is making.
“Every politician who’s ever had the problem of, it’s not going very well and they’re shrinking, complains about their coverage,” Trippi said. “The question they need to ask themselves is, Is the coverage diminishing because his support’s diminishing?”
Related Topics:behind the scenesBernie SanderslivestreamsmediaMedicare for AllpresidencyTwitch
Up Next