Preschool Teachers Ask Why ‘Cashiers at McDonalds’ Get Better Pay 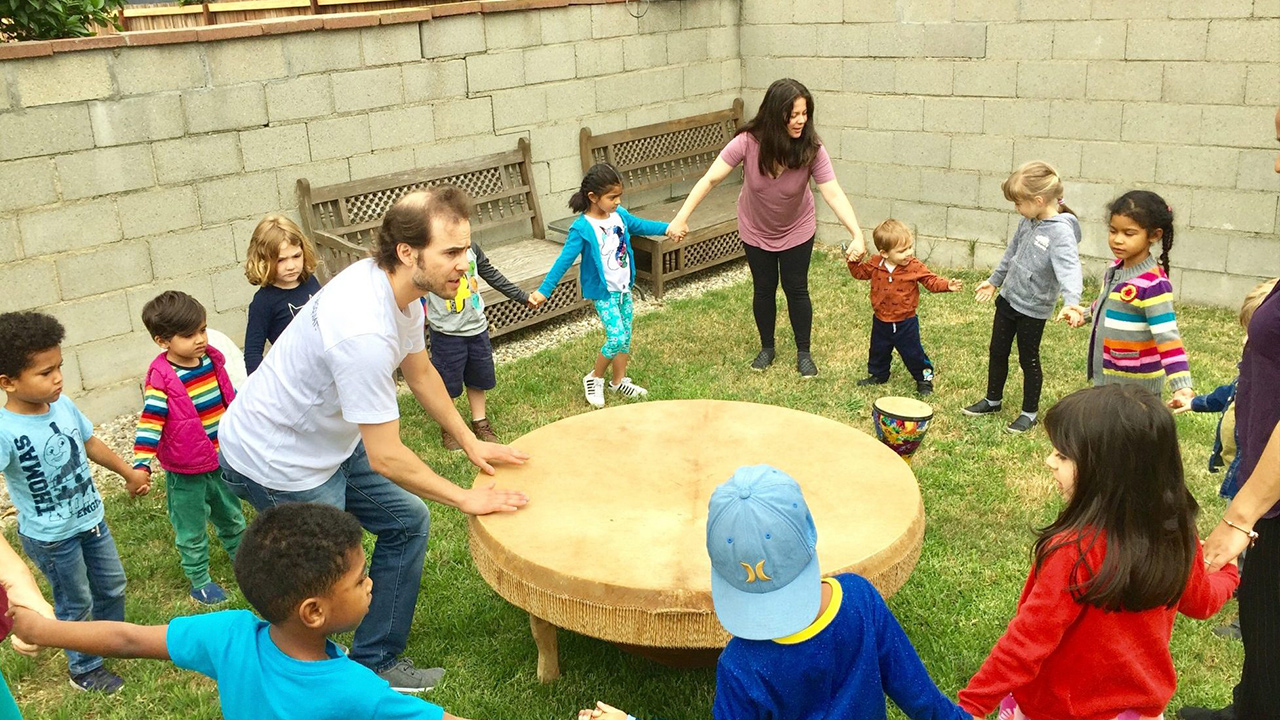 Preschool teacher Lorena Gomez’s work days begin at 6:30 a.m. when she welcomes a dozen 3-year-olds into her classroom. Every day, Gomez spends nine hours standing, sitting and crouching at the height of a toddler, passing out snacks, overseeing playtimes and teaching tiny Californians their numbers, shapes, colors, letters, and social niceties. She marvels, she says, at how quickly they grow — that is, when she has time.

Her second and third jobs, as a rideshare driver and nanny, start as soon as class is dismissed at 3:30, and she works far into the evening to augment the $14 an hour she makes in early childhood education. Her chosen career, she says, just doesn’t pay enough for her to live in an increasingly costly Sacramento housing market.
Gomez is not alone: Across California, early childhood educators are paid so poorly that more than half of the workforce — mostly women of color — rely on public assistance.
“There’s people who are cashiers at McDonalds that make more than (preschool) teachers,” Gomez said. “We’re completely underpaid, by far.”
This year, legislators and early childhood advocates cheered a budget signed by Gov. Gavin Newsom that included the most significant investments in recent history toward early childhood education programs. The $1.8 billion is expected to give tens of thousands more kids access to subsidized child care and preschool, and pump hundreds of millions of dollars into educator training and new child care facilities.

But left out of the budget picture was the issue of pay for early childhood educators, whose chronically low compensation has long troubled early childhood providers, advocates and experts. It’s an expensive ask—on top of an ambitious agenda with a price tag already estimated in the tens of billions of dollars — but one that could be critical, according to experts.
“If we don’t raise teacher salaries, all this training money is going to go for naught because we’re not going to attract a stronger slice of college graduates and more qualified teachers,” said Bruce Fuller, a professor of education and public policy at UC Berkeley.
“It’s just so key. The governor’s always talking about quality, but you’re not going to get quality unless you raise teacher salaries.”
In 2017, California child care workers ($12.29 an hour) and preschool teachers ($16.19) earned a median wage that was less than half of what teachers leading kindergarten ($38.33) and elementary classrooms ($45.17) earned, according to the Center for the Study of Child Care Employment at UC Berkeley.
A recent report commissioned by an influential group of legislators, including Democratic Assembly Speaker Anthony Rendon, set a long-term goal of ensuring that early childhood educators are paid as much as teachers in older grades.
The initiative’s supporters blame the disparity in part on the state’s system for reimbursing state-subsidized programs, which they say could be improved by two proposals working their way through the legislative pipeline.

Assembly Bill 125 by Democratic Assemblyman Kevin McCarty and Senate Bill 174 by Democratic Sen. Connie Leyva, which have advanced through the Legislature with virtually no opposition, would basically create a single reimbursement rate for early childhood providers that better accounts for regional costs and pays out more per kid for programs that meet specific quality standards. Both have passed their houses of origin and are awaiting action in appropriations committees.
Beyond that, however, child care and preschool providers across California say they’re placed in next-to-impossible positions when it comes to giving teachers raises.
Providers who mostly rely on fees from families say boosting pay means raising those fees—which average about $16,500 a year for infant care in California—and further pricing out lower- and middle-class parents. Meanwhile, providers who mainly contract through state-subsidized programs say the low reimbursement rates the state pays out don’t cover all kids who are eligible or truly account for the cost of caring for children.
Larry Drury, CEO of Go Kids, a nonprofit that operates child care centers and preschools in pricey Santa Clara and Santa Cruz counties, says he advertised in vain this year for a preschool teacher for one of Go Kids’ San Jose centers. Weeks passed, Drury said, with zero applications.
“Not even misqualified people, but no applications, period,” he said. “It’s tough to find preschool teachers who will work for $17 an hour. I can’t afford to pay them much more than that.”
Drury said several of his educators have left their positions because they can’t afford to live in Silicon Valley on a preschool teacher’s salary. One teacher got divorced and could no longer afford an apartment for her two kids, so she left for Arkansas to live with her parents, he said.

About one-fourth of the state’s early childhood educators leave the profession each year, hampering the quality of programs across the state, according to a collection of Stanford University studies that earlier this year urged the state to spend more on early childhood programs such as subsidized preschool to bridge a chronic achievement gap between the state’s most disadvantaged students and the rest of their peers.
Meanwhile, the slots and funding for the state’s subsidized child care and preschool programs remain limited compared with the demand, or even the number of eligible children. An estimated 2 million kids qualified for subsidized child care in 2017, but only 1 in 9 received such services, according to the California Budget & Policy Center, which blamed “inadequate state and federal funding.”
In Los Angeles, preschool operator Darlene Morales said she has had to shift her business model away from state reimbursements and toward family fees since funding has dwindled for the First 5 LA universal preschool initiative her Little Stars Preschool and Family Childcare relied on. Otherwise, Morales said, she couldn’t have continued to afford even the $15 to $18 an hour her teachers are paid.
For $800 a month, students in the Little Stars Spanish immersion preschool program learn to converse in Spanish, write their first and last names, recognize numbers and letters in both languages, solve 100-piece jigsaw puzzles and build a foundation for critical thinking. Morales said some of her teachers have been at Little Stars for more than a decade.
But holding onto her faculty has meant personal sacrifice, she said: When Little Stars was shifting from state subsidies to a private client base, she worked without pay to avoid cutting teachers’ hours or salaries.

“If they don’t have a consistent job with me, they’re not going to stay with me because they need their paycheck, bottom line,” said Morales. Little Stars, she said, is increasing its fees this year by $200 to raise teacher pay.
Every penny matters, said Gomez, the Sacramento preschool teacher, noting that few of her colleagues can afford to live without roommates. Some live in Section 8 housing, she said. When her own rent rose by $300 a month, she began driving for a rideshare company.
Though she’s thought about changing careers, she said, she stays because she loves the profession.
“Most people can’t do this job. Most people don’t have the patience, they don’t understand what it is to be with children all day. [But] I love being with my kids,” she said. “They take these lessons with them throughout the rest of their lives.”
CalMatters.org is a nonprofit, nonpartisan media venture explaining California policies and politics.

Podcast: What Happens to Housing Costs After the Big Quake Hits?

California’s Struggle to Get Food Stamps to the Hungry