BOSTON — Former Boston Red Sox infielder Elijah “Pumpsie” Green, the first black player on the last major league team to field one, has died. He was 85.

“Pumpsie Green occupies a special place in our history. He was, by his own admission, a reluctant pioneer, but we will always remember him for his grace and perseverance in becoming our first African-American player. He paved the way for the many great Sox players of color who followed. For that, we all owe Pumpsie a debt of gratitude.” — Red Sox owner John Henry

The Red Sox said Green, who lived in California most of his life, died Wednesday at in a hospital in San Leandro, near Oakland; no cause of death was immediately available. The team observed a moment of silence before its game against the Toronto Blue Jays.

“Pumpsie Green occupies a special place in our history,” Red Sox owner John Henry said. “He was, by his own admission, a reluctant pioneer, but we will always remember him for his grace and perseverance in becoming our first African-American player. He paved the way for the many great Sox players of color who followed. For that, we all owe Pumpsie a debt of gratitude.”

A light-hitting second baseman and shortstop, Green brought baseball’s segregation era to an end of sorts when he entered a game against the Chicago White Sox as a pinch-runner for Vic Wertz on July 21, 1959 — more than a dozen years after Jackie Robinson broke baseball’s color barrier with the Brooklyn Dodgers.

Green joined the team on a road trip and had played nine games before taking the field at Fenway Park for the first time. Green said this year in an interview with NESN, the Red Sox TV network, that he remembered receiving a standing ovation when he came to the plate, batting leadoff.

“It was heart-warming and nerve-wracking,” he told reporters in 1997, when he returned to Boston to take part in ceremonies marking the 50th anniversary of Robinson’s debut. “But I got lucky: I hit a triple off the left-center fence.”

Born in Boley, Oklahoma, he moved with his family to California at a young age and met his wife Marie Presley at Contra Costa Junior College. He made his professional baseball debut at 19 years old for the Oakland Oaks of the Pacific Coast League and was the California League’s Most Valuable Player in 1955.

The Red Sox purchased his contract and he attended his first spring training with the club in ’56. He was added to the club’s 40-man roster in September of 1958.

Green didn’t have the talent of Hall of Famers like Robinson and Larry Doby, who was the first black player in the American League. The Red Sox infielder reached the majors as a role player, just once playing more than 88 games, and never hitting more than six homers or batting better than .278.

Green played parts of four seasons with the Red Sox before finishing his career with one year on the New York Mets. In all, he batted .246 with 13 homers and 74 RBIs.

But his first appearance in a Boston uniform ended baseball’s ugliest chapter, and the fact that it took the Red Sox so long left a stain on the franchise – and a void in the trophy case – it is still trying to erase. 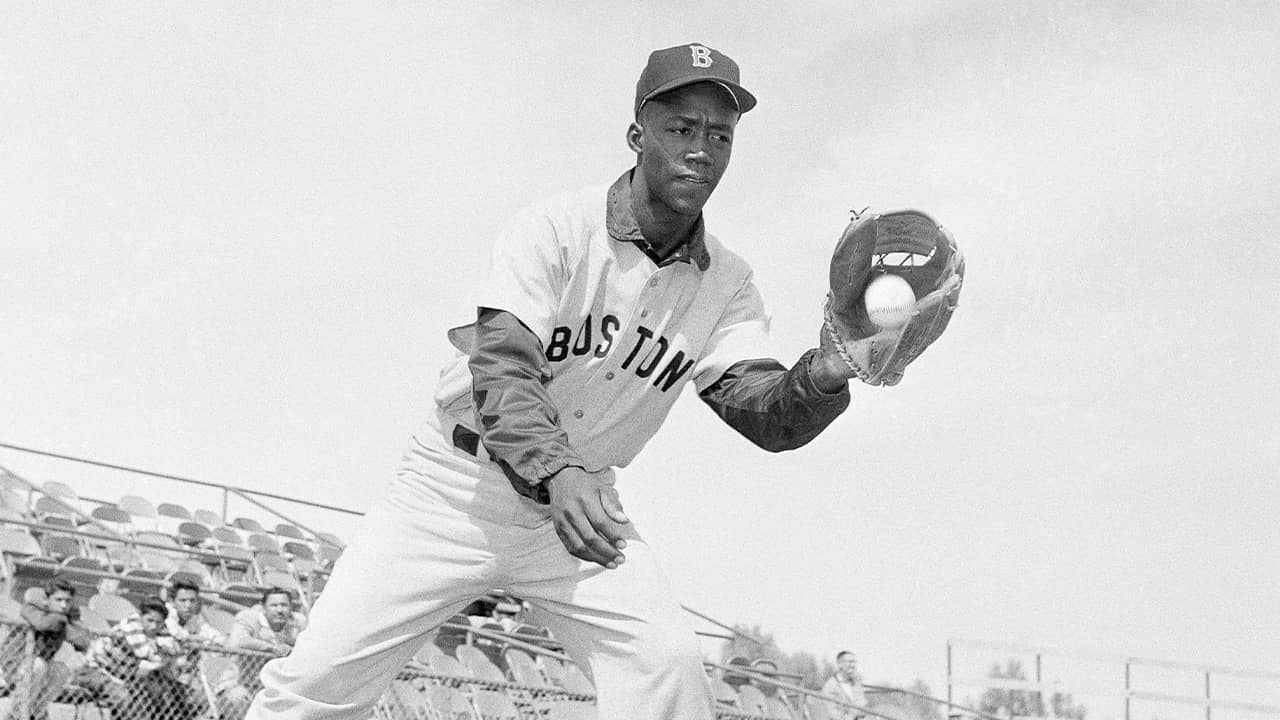 Unlike Robinson, Green Said, He Received No Death Threats

The Red Sox had a chance to sign Robinson in 1945, before the Dodgers, and Hall of Famer Willie Mays a few years later; they chose not to, decisions that help explain the 86-year World Series championship drought that didn’t end until 2004. Last year, acknowledging the poor racial record of longtime owner Thomas A. Yawkey, the team expunged his name from the street outside the ballpark.

A few days after Green was called up, the Red Sox added Earl Wilson, a black pitcher. Green said there was an informal quota system that required teams to have an even number of black players so they would have someone to room with on the road.

They were among the few blacks in the clubhouse, the front office or the crowd, Green said in ’97.

“Most of the time it was just me,” he said. “It was almost an oddity when you saw a black person walking around the stands.”

But unlike Robinson, Green said, he received no death threats. “It was mostly insults,” he said then.

“But you can get those at any ballpark at any time,” he said. “I learned to tune things out.”

Red Sox center fielder Jackie Bradley Jr. knew what an impact he had on African-Americans now playing in Boston.

Green Returned to Northern California After His Baseball Career Ended

“As we all know, this is the last organization to integrate,” he said after the Red Sox beat Toronto 5-4 on Wednesday night. “You’ve got to start somewhere. I’m sure we’re thankful for him across the board.”

“Baseball still has its problems, and so does society. I don’t believe things are that much better in baseball or society. Hopefully, it will be shortly.” — Elijah “Pumpsie” Green

Green returned to northern California after his baseball career ended and earned a degree in physical education from San Francisco State. He worked as a counselor and coach at Berkeley High School before retiring in the 1990s.

The Red Sox honored him again on Jackie Robinson Day in 2009 and ’12, but he was unable to attend the ceremony in 2018 when his debut was recognized as a historic moment by the Red Sox Hall of Fame.

Upon his return to Fenway in ’97, he noticed that things had improved but still saw work to be done.

“Baseball still has its problems, and so does society,” Green said. “I don’t believe things are that much better in baseball or society. Hopefully, it will be shortly.”

Green is survived by his wife of 62 years, Marie; one of three brothers, Cornell Green, was a star safety for the Dallas Cowboys. He had one daughter, Heidi; his son, Jerry, died last year. He had two granddaughters and four great grandsons.

A funeral will be held on Aug. 2 in Oakland.