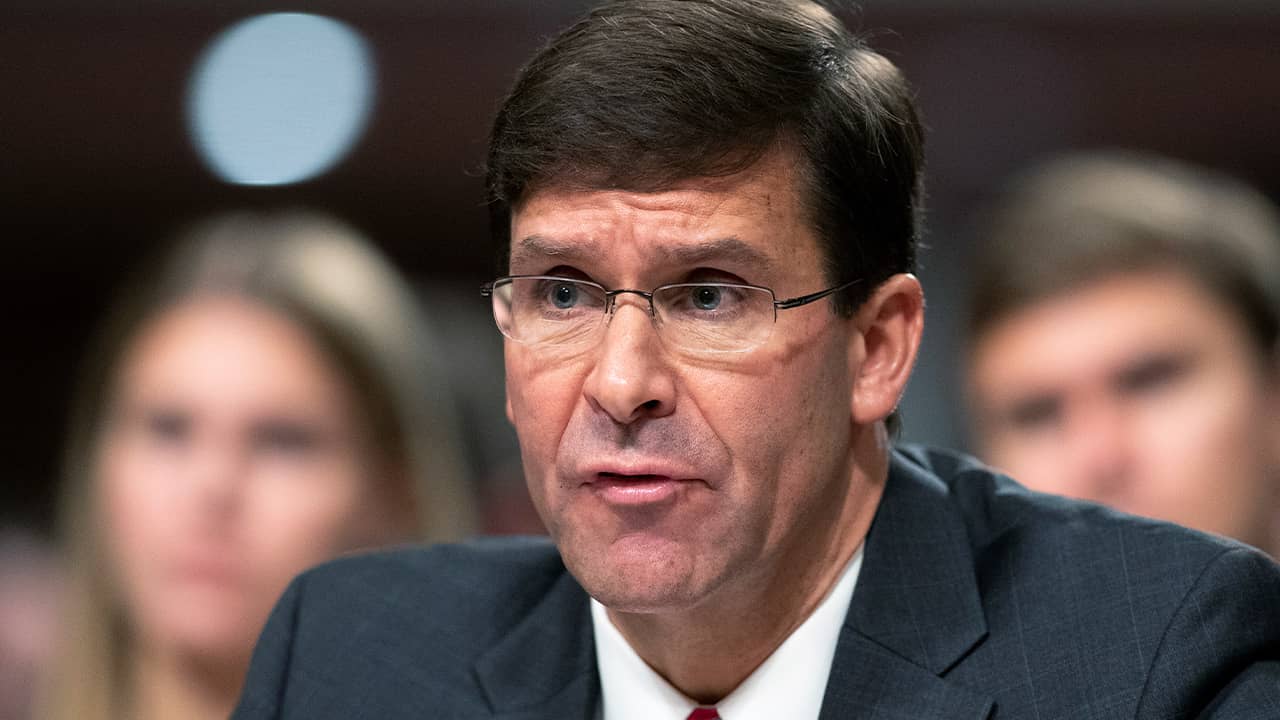 WASHINGTON — Army Secretary Mark Esper, President Donald Trump’s nominee to become secretary of defense, told his Senate confirmation hearing Tuesday he is troubled by Turkey’s decision to defy the United States by acquiring Russian-made air defenses.
“It is very disheartening to see how they have drifted over the past several years,” Esper said, citing the Turkish government’s purchase of the S-400 air defense system that the Trump administration has said is likely to trigger U.S. economic sanctions and jeopardize Turkey’s role in the NATO alliance, whose primary adversary is Russia.
At the White House, Trump took a more conciliatory approach to Turkey, asserting that it chose to buy from Russia because the Obama administrations refused to sell the Patriot air defense system “under any circumstance.” In fact, talks between the U.S. and Turkey on a potential Patriot deal during the Obama years faltered on Turkey’s insistence on technology transfer rights that would have allowed it eventually to make the missiles themselves. This ran afoul of the U.S. manufacturer’s propriety interests in addition to any national security concerns.
Turkey began taking delivery of S-400 components in recent days, but the Trump administration has yet to fully explain its intended response. Trump told reporters Tuesday that the U.S. would not sell the F-35 to Turkey, but he did not address other aspects of the issue, such as the expected removal of Turkey as a supplier of F-35 components.

“We are now telling Turkey that because you have been forced to buy another missile system we’re not going to sell you the F-35,” Trump said. Pentagon officials have said Turkey was offered favorable terms to buy a U.S.-made air defense system, the Patriot, but turned it down in favor of the Russian system despite strong U.S. objections.


“We are now telling Turkey that because you have been forced to buy another missile system we’re not going to sell you the F-35.” — President Donald Trump
The Pentagon has repeatedly said the S-400 purchase would mean Turkey’s indefinite suspension, and potentially its permanent removal, from the U.S. F-35 stealth fighter program as a supplier of numerous components. It also has suspended a program of F-35 flight training for Turkish student pilots and instructor pilots at Luke Air Force Base in Arizona and given those personnel a July 31 deadline to leave the United States.
The U.S. governmen’ts concern is that the S-400 could be used by Turkey to gather data on the capabilities of the F-35, and that the information could end up in Russian hands.
Asked about Turkey’s S-400 decision, Esper told the committee it was “the wrong one, and it’s disappointing.”
Later he went further, saying that although Turkey has long been a reliable NATO ally, it is now headed in the wrong direction. He said he recently told Turkey’s defense minister, “You can either have the S-400 or you can have the F-35. You cannot have both. Acquisition of the S-400 fundamentally undermines the capabilities of the F-35.”
Turkey has already taken delivery of four F-35s. They are at Luke Air Force Base in Arizona, where Turkish military personnel are undergoing pilot training. The Pentagon has given those Turks until July 31 to leave the United States, saying the S-400 deal means Turkey’s involvement in the F-35 program will be brought to a conclusion.

The Administration Plans to Brief Lawmakers Soon on a Plan

Esper also told the committee he believes the United States should pursue diplomatic solutions to its differences with Iran and avoid war.
“I agree we do not want war with Iran,” he said. “We are not seeking war with Iran. We need to get back on the diplomatic channel.”


“I agree we do not want war with Iran. We are not seeking war with Iran. We need to get back on the diplomatic channel.” — Army Secretary Mark Esper
Esper said the administration plans to brief lawmakers soon on a plan for working with other countries to more closely monitor commercial shipping in and around the Persian Gulf. He said this plan, which he called “Operation Sentinel,” is intended to deter Iran from impeding navigation in the Gulf and avoid Iranian miscalculations.
Testifying a day after Trump submitted his nomination to the Senate, Esper faced a mostly friendly series of questions from members of the Armed Services Committee. One clear exception was Sen. Elizabeth Warren, the Massachusetts Democrat who is running for the Democratic presidential nomination. She indicated she does not intend to vote for Esper’s confirmation, citing what she called his unwillingness to commit to avoiding potential conflicts of interest with his former employer, Raytheon Co., which is a major defense contractor.
“You should not be confirmed as secretary of defense,” Warren said.
The Republican-led Senate is expected to attempt to get Esper confirmed as early as Thursday, ending seven months of leadership uncertainty at the Pentagon. There has been no Senate-confirmed defense secretary since Jim Mattis left last New Year’s Eve.

Esper Reverted to His Previous Position of Army Secretary

Mattis quit after a series of policy disputes with Trump, including the president’s announcement in December that he would withdraw all U.S. troops from Syria — a move he never executed.
Several members of the Armed Services Committee raised with Esper their concern that the Pentagon has suffered from a shortage of Senate-confirmed senior officials.
“I am concerned that the defense department is adrift in a way I have not seen in my whole time on Capitol Hill,” said Sen. Jack Reed, a Rhode Island Democrat who has served in the Congress since 1991.
Esper, a former Army officer, said he met with White House officials on Monday to discuss plans to fill open positions, which include the civilian leader of the Air Force. The Air Force has had an acting secretary since Heather Wilson departed in May.
Esper is one of three people who have served as acting defense secretary this year, following Mattis’ departure. The first was Patrick Shanahan, who was never nominated for the position and quit abruptly in June. Esper then took over as the acting secretary.
The moment Esper’s nomination was received by the Senate on Monday, he was required by law to step out of his role as acting defense secretary until he is confirmed as the permanent secretary. He reverted to his previous position of Army secretary.
Filling in for Esper pending his confirmation is Richard V. Spencer, who is now the third acting secretary of defense this year. Spencer has been the civilian leader of the Navy since August 2017, a position he would return to if, as expected, Esper wins Senate confirmation.