NUEVO LAREDO, Mexico — Asylum-seekers gathered in Nuevo Laredo, across the border from Texas, grappled to understand what a new U.S. policy that all but eliminates refugee claims by Central Americans and many others meant for their bids to find a better life in America amid a chaos of rumors, confusion and fear.

“They didn’t deport us but they took us out (of the U.S.) in a bad way; in theory we wait for a hearing.” — Nolvin Godoy, a 29-year-old Guatemalan

The policy went into effect Tuesday and represents the most forceful attempt to date by President Donald Trump to slash the number of people seeking asylum in the United States. It denies asylum to anyone who shows up on the U.S. border after traveling through another country, something Central American migrants have to do.

In some parts of Nuevo Laredo, migrants continued to trickle into shelters, including seven members of a family from the Mexican state of Michoacan, who fled the shootings and extortions in their violent region and were happy to find shelter even though some had to sleep in the hallway. They hoped they could get asylum because they did not pass through another country to reach the border.

But about 70 mostly Central American migrants, who had crossed Mexico to reach the border, were returned to Mexico with an appointment with a judge tucked in a transparent plastic bag — part of another recently imposed policy of requiring many asylum seekers to wait in Mexico rather than the U.S.

Some bitter, they assembled in the National Institute of Migration facility next to the international bridge with a cluster of women cradling children, men asking questions and small children running around under the watchful eye of parents.

“They didn’t deport us but they took us out (of the U.S.) in a bad way; in theory we wait for a hearing,” said Nolvin Godoy, a 29-year-old Guatemalan who has gone deep into debt paying a coyote almost $10,000 to take him, his wife and her 2-year-old son to get them across the Rio Grande to turn themselves in to U.S. authorities. 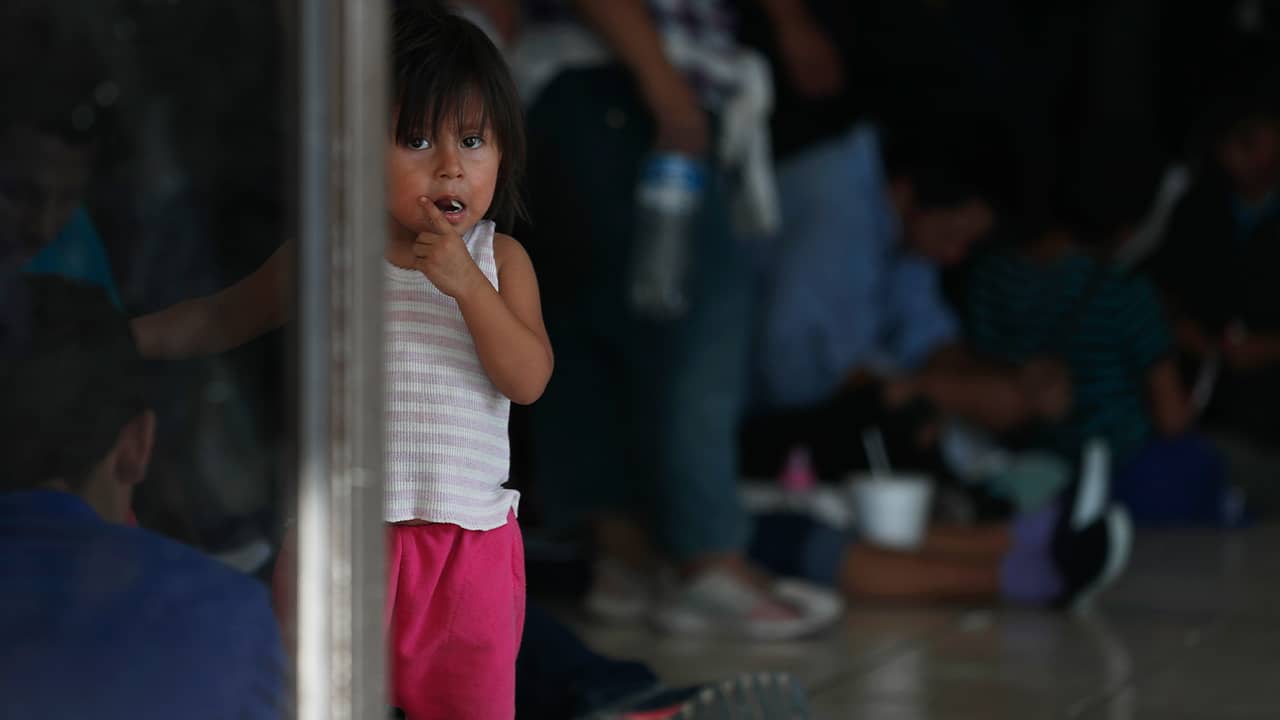 A migrant child looks at the camera while her parents wait Tuesday at an immigration center on the International Bridge 1 in Nuevo Laredo, Mexico. (AP Photo/Marco Ugarte)

After 10 days in a detention center in the U.S., they say they were given an appointment with a judge in September to begin the asylum process. Now they’ve been sent back to Mexico and hold out little hope of being able to appear before the judge on the date set.

“Today the law fell on us and they are going to take us to Monterrey — 200 kilometers from Nuevo Laredo — and we don’t know what is going happen after that because we don’t know anyone; I am sinking into debt,” Godoy said.

Mexican migration officials gave them food and a document that is a certificate guaranteeing them access to official programs but which does not specify which ones, though Mexico has said the returned will be able to get jobs. They received an official telephone number and email where they can get advice.

Godoy, who says the stained shirt on his back is his only possession, believes it will all be worth little if he has no means of survival. “Maybe it’s best to go back.”

No migrants dare to go outside the migration installations. “Outside is organized crime,” he said.

Dozens of people like Godoy were returned to Nuevo Laredo on Tuesday and by nightfall had been put on a bus with the only explanation that they were being taken to Monterrey, in the neighboring state of Nuevo Leon. Most of them had reached the U.S. irregularly, and did not fit the profile of migrants who would wait in Mexico for weeks or months, sign up on waiting lists and then be called by U.S. authorities to process their asylum claims.

Some said they had not originally planned to request asylum in the United States, and said the idea only occurred to them when they were offered the option.

Immigrant Traffickers Likely the Only Winners

However, as late as Tuesday morning a group of 15 migrants, including four children, showed up at the international bridge because their names had reached the top of the list that has long been used to allow migrants to request asylum. The possibility that process might continue to work gave some hope to migrants like Linerio Gonzalez, 24, and Ana Paolini, 20, who fled Venezuela for political reasons. It was unclear if the new measures would change things for Venezuelans like them.

“Added to all this is now the uncertainty about mass deportations, that could put our shelters in a difficult position.” — Rev. Julio López, director of the Roman Catholic shelter Albergue Nazareth

“It drives you to desperation,” said Gonzalez.

“You hear a lot of things, but we don’t know,” Paolini said, adding that the prospect of being able to file for asylum, only to be returned to Nuevo Laredo, fills her with fear.

The Rev. Julio López, director of the Roman Catholic shelter Albergue Nazareth, said the border was in the grip “of a lot of confusion because of all the changes.”

Lopez said the situation had become worse for migrants, and immigrant traffickers were likely to be the only winners.

On top of it, more deportees might be expected from the planned raids in the United States, something that could overwhelm shelters.

“Added to all this is now the uncertainty about mass deportations, that could put our shelters in a difficult position,” said Rev. Lopez.