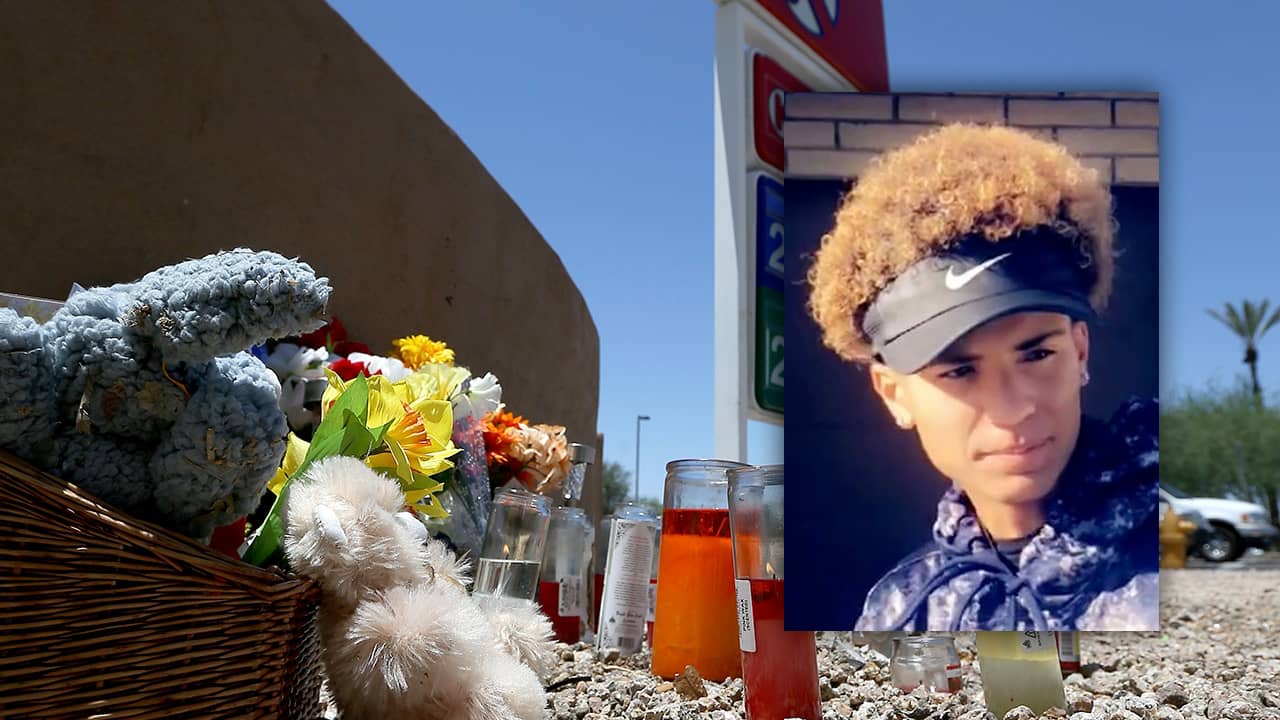 PHOENIX — Hundreds of people including a presidential candidate spoke out on Twitter this week after a 17-year-old black youth was killed at suburban convenience store, allegedly by a white man charged Tuesday with first-degree murder who has said he felt threatened by the boy’s rap music.
Family members have told local media that Elijah Al-Amin would have turned 18 in two weeks and was looking forward to his last year in high school.
Friends and family hugged Monday at the Islamic Community Center in Tempe, where prayers for the teen were held before burial in Maricopa County.
A modest makeshift memorial outside the convenience store where Al-Amin was stabbed was still up Tuesday, with a pair of white porcelain angels, fresh flowers and burning calendars — including one dedicated to the Virgin of Guadalupe, the Catholic patron saint of Mexico.
The Maricopa County Attorney’s Office said it filed a direct complaint Tuesday charging Michael Adams, 27, in the Thursday morning killing. First-degree murder carries a sentence of life behind bars or death.
Adams is next scheduled to appear in court July 15.

The Twitter hashtag #JusticeForElijah began trending over the Independence Day weekend after police in the suburban Phoenix city of Peoria arrested Adams. He had been released from state prison two days before.
“Another one of our children has been murdered in a heinous and unprovoked way. The DOJ must investigate this hate crime immediately,” Democratic candidate Cory Booker wrote on his Twitter account Monday. “RIP Elijah. #JusticeForElijah.”

Another one of our children has been murdered in a heinous and unprovoked way—the DOJ must investigate this hate crime immediately. RIP Elijah. #JusticeForElijah https://t.co/0QaJiKudAf

Linda Sarsour, a Palestinian American civil rights activist from Brooklyn, New York, called the crime “outrageous” and said it recalled the 2012 killing of 17-year-old high school student Jordan Davis in Jacksonville, Florida. “Rest in power Elijah Al-Amin,” she wrote.
Michael Dunn, who is white, was later convicted of first-degree murder in that earlier killing, a shooting that erupted during an argument about loud music coming from a car carrying Davis and other black teenagers.
In the Arizona attack, first responders discovered Al-Amin collapsed outside the Peoria Circle K store’s gas pumps and took him to a hospital, where he died. Several people inside the store had watched as Al-Amin was stabbed in the throat and the back before he ran outside.
Officers found Adams nearby with a pocket knife and blood on his body. Adams told them he had felt threatened by the rap music coming from Al-Amin’s vehicle.

Adams’ attorney, Jacie Cotterell, told the judge at his initial appearance hearing that her client was mentally ill and released without any medication, “no holdover meds, no way to care for himself.”
Cotterell said during the videotaped court hearing that “this is a failing on the part of the (Arizona) Department of Corrections.”

Trump Defends Acosta but Will Look 'Closely' at Epstein Deal