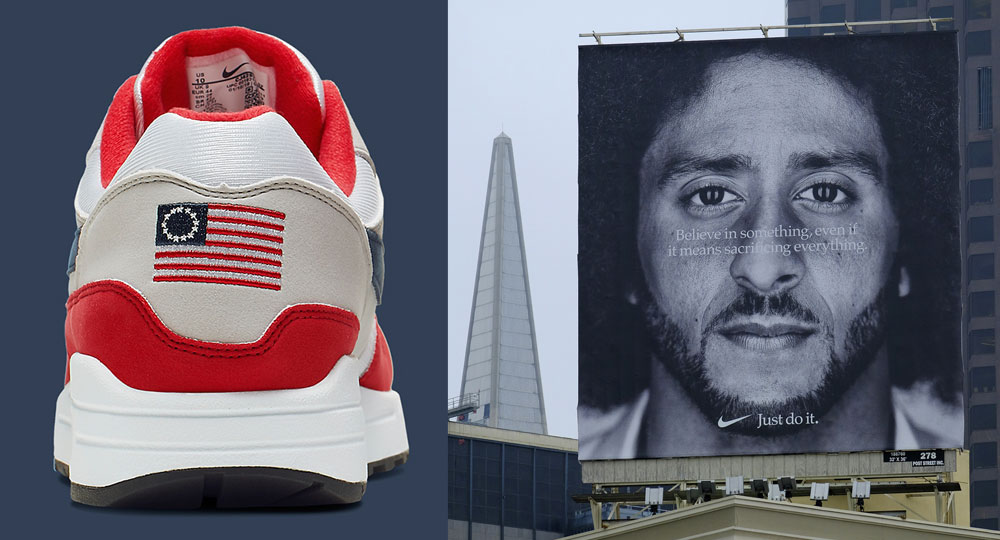 NEW YORK — Nike is pulling a shoe that features a “Betsy Ross” U.S. flag design after former NFL quarterback Colin Kaepernick complained to the shoemaker, according to the Wall Street Journal.

“Nike has chosen not to release the Air Max 1 Quick Strike Fourth of July as it featured an old version of the American flag,” Nike said in a statement to CNBC.
On social media, some argued that white supremacists have appropriated the flag design, while others argued that even if that’s true, it’s no reason to pull the shoe.

If you’re going to tweet about the Betsy Ross Flag, make sure you include this part: “It has been appropriated by some extremist groups opposed to America’s increasing diversity.” https://t.co/k5N5bGhDut

A ripple in the Colin Kaepernick/Nike/Betsy Ross flag story: The Patriot Movement, which is one of the groups at the heart of the flap over the use of the Betsy Ross flag on a shoe, has removed the flag (or had it removed by an editor) as the chief symbol on its Wikipedia page. pic.twitter.com/oK2AbbGZkZ

It’s a good thing @Nike only wants to sell sneakers to people who hate the American flag…. @NFL #HappyFourth https://t.co/G6w8vDjvLP

The Betsy Ross flag is now a symbol of White Nationalism and slavery? Not defiance against a distant monarchy?

The Air Max 1 USA shoe had already been sent to retailers to go on sale this week for the Fourth of July holiday, the Journal reports.
Arizona Governor Doug Ducey lashed out at Nike’s decision to yank the sneaker, tweeting that he is asking the state’s Commerce Authority to withdraw all financial incentives for the company to locate there.

And then this news broke yesterday afternoon. 2/https://t.co/NmM8OPGR0G

“Arizona’s economy is doing just fine without Nike. We don’t need to suck up to companies that consciously denigrate our nation’s history,” he wrote.
The shoe would have retailed for $140, according to Sneakernews.com.
Kaepernick became a polarizing figure after he chose not to stand for the national anthem before a 2016 NFL preseason football game. Kaepernick said he was protesting racial injustice. Detractors said he was showing disrespect to the U.S. flag and to military service members.
GV Wire staff contributed to this Associated Press story.