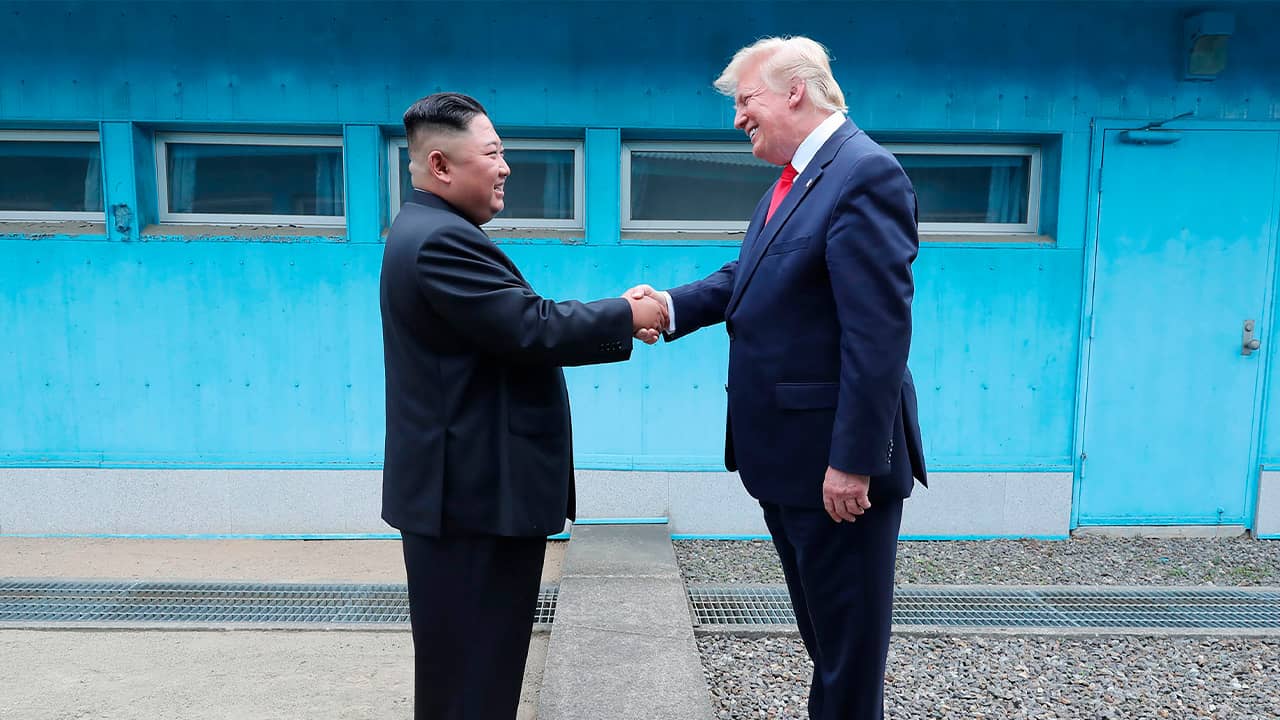 PANMUNJOM, Korea — “Ok, let’s do it.”
With those words, a deliberate step and a pat on the arm of Kim Jong Un, President Donald Trump became the first sitting American leader to step into North Korea on Sunday as the two made history at the heavily fortified Demilitarized Zone. The made-for-television moment was unthinkable just two years ago, when the men were trading base insults and grim threats.
Trump’s three-hour stop at the DMZ — of which about 80 minutes were spent with Kim — was a display of handshake-diplomacy for the history books, but also a chaotic spectacle reflective of the last-minute nature of the invitation to the authoritarian leader to join him at the border between the Koreas.
Afterward, it was unclear whether the meeting was more show than substance. Other than the headline-grabbing moment and the unprecedented images, Trump’s only accomplishment appeared to be securing an agreement to restart nuclear talks that he himself had walked out on in February during his last summit with Kim in Vietnam.

Trump had long planned a visit to the DMZ, dating to 2017 when a scheduled trip was canceled by fog, but aides said the public invitation for Kim to join him there was as spontaneous as it seemed. In typical Trump fashion, it started with a tweet.
“I would meet him at the Border/DMZ just to shake his hand and say Hello(?)!” Trump posted about 30 hours before the visit.

After some very important meetings, including my meeting with President Xi of China, I will be leaving Japan for South Korea (with President Moon). While there, if Chairman Kim of North Korea sees this, I would meet him at the Border/DMZ just to shake his hand and say Hello(?)!

The secrecy that had surrounded the ill-fated attempted visit two years ago was replaced by a media frenzy stoked by the president himself.

Trump Broached the Idea of Walking Into North Korea

Trump said North Korea quickly responded and expressed interest in the invitation. U.S. and North Korean officials spent much of Saturday evening and early Sunday trying to surmount the immense logistical and security hurdles on such a tight timetable.

Trump escorted Kim back to the South as a scuffle broke out between reporters and North Korean security guards, with officials shoving and trying to block the press from capturing the moment.
The jostling intensified as the leaders moved to the Freedom House on the southern side of Panmunjom, where they made brief remarks to reporters and then met for roughly 50 minutes. A photographer was knocked to the ground and one reporter was seen in tears.
At one point, incoming White House press secretary Stephanie Grisham side-checked a North Korean guard who was blocking reporters from the room while others security officials frantically tried to cordon off the area with yellow rope.
Grisham ended up with bruises from the fracas. The U.S. Secret Service intervened in the pushing and shoving match.
The president was joined in the Freedom House conversation with Kim by his daughter and son-in-law, Ivanka Trump and Jared Kushner, both senior White House advisers. Chief of staff Mick Mulvaney milled about with other aides. National security adviser John Bolton, a skeptic of the talks with Kim, was en route to Ulaanbaatar to consult with Mongolian officials on regional security issues.
At one point, Ivanka Trump and Kushner stopped to enter one of the blue huts straddling the border between the two Koreas. Asked by a reporter about her trip to the North, she replied, “Surreal.”
And a sequel could be in the works: Trump told reporters he had invited Kim to Washington.