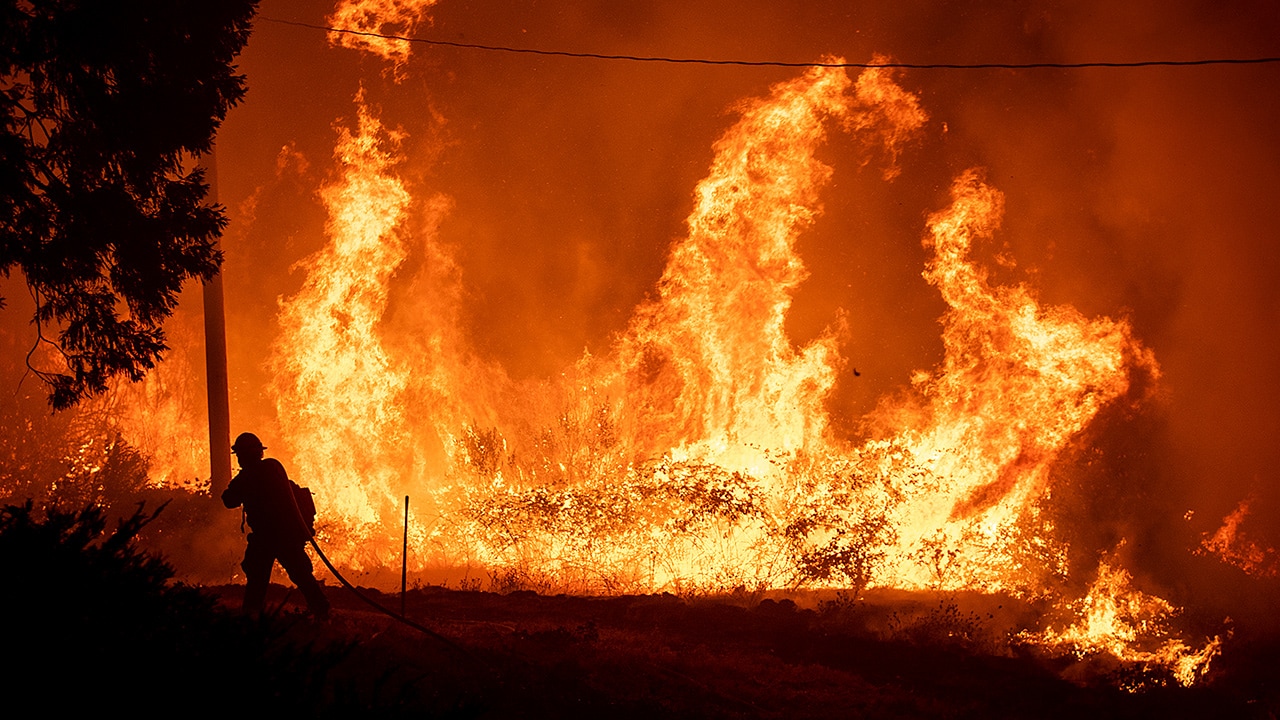 With much fanfare and no less hand-wringing, state regulators approved plans that for the first time set out how California’s electric utilities intend to prevent their equipment from sparking wildfires. But the plans provide scant details, and little evidence to support the companies’ claims that indiscriminately clear-cutting millions of trees and replacing hundreds of thousands of wooden utility poles with steel ones will actually reduce the risk of wildfires.
Further, the nearly $3 billion price tag for California’s utilities to perform fire-deterrent work is heavily weighted toward projects that afford them financial advantages and tax benefits: As things stand, the investor-owned utilities may recover 10% or more beyond what they spend on the projects, recouping the money from their customers.
Pole replacement, for example, is a big-ticket item in many of the plans—causing some skeptics to wonder if it’s there for wildfire-resistance or profit-making. When utilities invest in infrastructure, they may gain tax benefits by accelerating depreciation on their equipment.
Overall, the state’s Public Utilities Commission “verified an outline, not a plan,” said its former president, Loretta Lynch.  “Nobody is figuring out whether or not these plans contain any measure of mitigation, or whether they are just and reasonable–which are the two pillars of utility regulation.”

The commission, operating under an urgent deadline from the Legislature, rushed the approval process on a “rocket docket.” Utilities submitted the plans in February and the commission signed off on them May 30, even while admitting that it lacks the expertise to determine if the proposals will make a difference.

Zoraya Griffin, a SDG&E spokeswoman, said all the utilities will provide additional information to the commission in the next phase of the proceedings, in late August: “In terms of quantifiable measurements, we look forward to sharing that data.”
Cal Fire’s chief of utility mitigation, Mike Wilson, agreed that “you have nothing to go on, no metrics” with which to judge the plans. But, he said, California utilities are at last making an effort:
“They are changing course, but it’s like turning a supertanker.”
The companies’ plans uniformly emphasize brush and tree clearance, replacing wooden poles for composite or steel ones, ramping up weather monitoring and adding remote cameras, and employing “hardening measures” such as insulating lines and installing protective covers over some equipment.
But the utilities commission cautioned the companies against taking out wide swaths of vegetation without considering how fire prone the plant or tree is, or whether it’s healthy. PG&E, for example, was told to consult professional arborists before removing live trees. Likewise, vegetation must be trimmed from around poles and lines, the commission said, but utilities plant removal should conform to a plan that won’t denude whole areas and create unintended environmental consequences.
Experts say that not all of those ideas are worth the price tag.
“System hardening sounds good, but most of the fires that have been caused across the board in the United States would not be specifically mitigated by hardening,” said Don Russell, an electrical engineer at Texas A&M University who researches utility-caused fires.

Fund to More Quickly Reimburse Fire Victims Not Yet Drafted

“If you were to ask me, ‘Are replacing utility poles the best place to spend your money to cut down the risk of fire?’ the answer would be, ‘No.’ Poles falling over and taking lines down with them is not a huge factor in wildfires. In fact, it seldom happens.”
On the other hand, Russell said, if more robust poles are still standing after fires it makes restoring power much speedier.

In approving the plans the utilities submitted, the commission specified that companies could not “seek or obtain double recovery of cost,” cautioning that if they are already asking for reimbursement for current projects, they may not include those costs in a new request.
Bill Chiu, managing director of grid resiliency for Southern California Edison, said the utility will spend as much as $680 million this year for fire mitigation projects, adding, “This is not about spending money. This is about putting in place the appropriate amount of mitigation to address the risk.”
The costs for the new fire projects will be carefully recorded, he said, so that they don’t duplicate work the company is already in the process of being repaid for.
Meanwhile the clock is ticking on Newsom’s proposed legislation: the Legislature’s last work day before its summer recess is July 12. It’s also the timeframe for national ratings agencies to weigh in on possibly downgrading the credit of Edison and SDG&E, based on wildfire liability.
With PG&E in bankruptcy and facing $30 billion in claims, state officials hope the governor’s proposed legislation, and these wildfire amelioration plans, will help steady nerves on Wall Street.
The utilities were compelled to submit their plans by legislation last year by Napa Democratic Sen. Bill Dodd. He now acknowledges that many contours of the plans need backfilling, but said the utilities will provide that additional information soon.
“It will be better next year,” Dodd said. “Luck and hope are not strategies, but we will need both.”
Want to get up to speed on what’s causing California’s worsening wildfires, and what’s being done to prevent them? Check out our CALmatters wildfire explainer.
CALmatters.org is a nonprofit, nonpartisan media venture explaining California policies and politics.