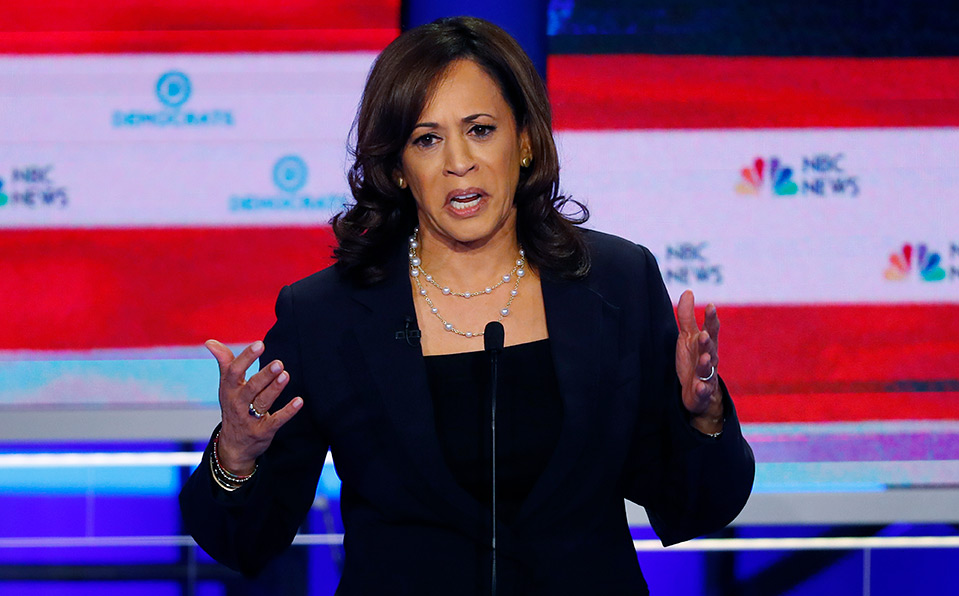 WASHINGTON — Kamala Harris spoke slowly but bluntly as she stared at Joe Biden, then began treating him as a hostile witness.

For Harris, an Effort to Be More Personal

That Harris and other Democratic presidential hopefuls would come out swinging against Biden was no surprise, and her verbal strike was hardly spontaneous. Moments after the exchange, her campaign tweeted a picture of a school-age Harris with pigtails, over the caption: “There was a little girl in California who was bussed to school. That little girl was me.”
Aides to Harris later framed the confrontation as an extension of their candidate’s recent efforts to be more personal, coming after would-be supporters said they wanted to hear more of her backstory.
Still, the moment shook up the debate. In deeply personal tones, Harris hammered Biden for policy choices that she suggested betrayed the spirit of the civil rights movement, if not directly opposing all it stood for. She was relentless, exhibiting the controlled force of a practiced cross-examiner.
“Do you agree today that you were wrong to oppose busing in America?” Harris asked.
A visibly angry Biden responded that his record was mischaracterized. But he was left denying Harris’ comments on a technicality, saying he didn’t oppose public school busing, just it being ordered by the Department of Education — decrying federal intervention on the issue on behalf of local entities and states.

Harris shot back, “There are moments in history where states fail to support the civil rights of people.”
Biden was so flustered that he failed to lean on his time as Barack Obama’s vice president — seeming unsure of himself for prolonged stretches.
Harris said Friday that the back-and-forth with Biden was her “just speaking truth.” She told CBS that she has a “great deal of respect” for Biden and would make no judgment on whether his response was disqualifying.
“That’s a decision for the voters to make,” Harris said.
Senior advisers to Biden insisted that they weren’t surprised by the confrontation and were satisfied with their candidate’s response in the time allowed. They noted that while he dismissed Harris’ characterization of his relationship with segregationist senators in his early years in the Senate more than 45 years ago, Biden appeared to be listening while she criticized his position on busing.
“I thought it was an important moment. He listened. And you don’t judge other people’s pain,” said Cedric Richmond, Biden’s campaign chairman.
“We know that we are the front-runner and that people are going to try to bring the front-runner down,” said Richmond, a Louisiana congressman. “Since when is experience and wisdom a bad thing?”
Adding to the drama, though, was the fact that Harris and Biden have long been friends . She grew close to the former vice president’s son Beau during their time as state attorneys general. Harris served in California while Beau Biden was serving in Delaware. The two were partners during negotiations with banks amid the foreclosure crisis, and Harris texted and talked with Beau Biden daily, sometimes more, before his death in 2015 after being diagnosed with brain cancer.

‘I’m Still Holding On to That Torch’

When Joe Biden endorsed Harris during her 2016 Senate race, he noted that his son “always supported her.”
At a fundraiser last week, Biden hailed the importance of “civility” in politics, mentioning that he worked decades ago alongside senators who supported segregation. Biden has been roundly criticized for the comments, but hasn’t apologized.
Others also tried to hit Biden on Thursday. Moments in, 38-year-old California Rep. Eric Swalwell recalled being just 6 when he saw Biden speak, saying the ex-vice president was “right when he said it was time to pass the torch to a new generation of Americans.”
Biden, 76, was better prepared for quips about his age, retorting, “I’m still holding onto that torch.”
Harris appeared to want to defuse things, then, saying: “Hey, guys. You wanna know what America does not want to witness? A food fight. They want to know how they’re going to put food on the table.”
But that only set the stage for Harris’ dramatic exchange with Biden later. It left even some of Harris’ rivals praising her performance.
“What Kamala said was a fair shot,” said New York Sen. Kirsten Gillibrand.
And Harris’ campaign continued to lean into the moment, offering T-shirts for sale with her pigtails picture. Her campaign said Thursday saw some of its strongest fundraising to date.