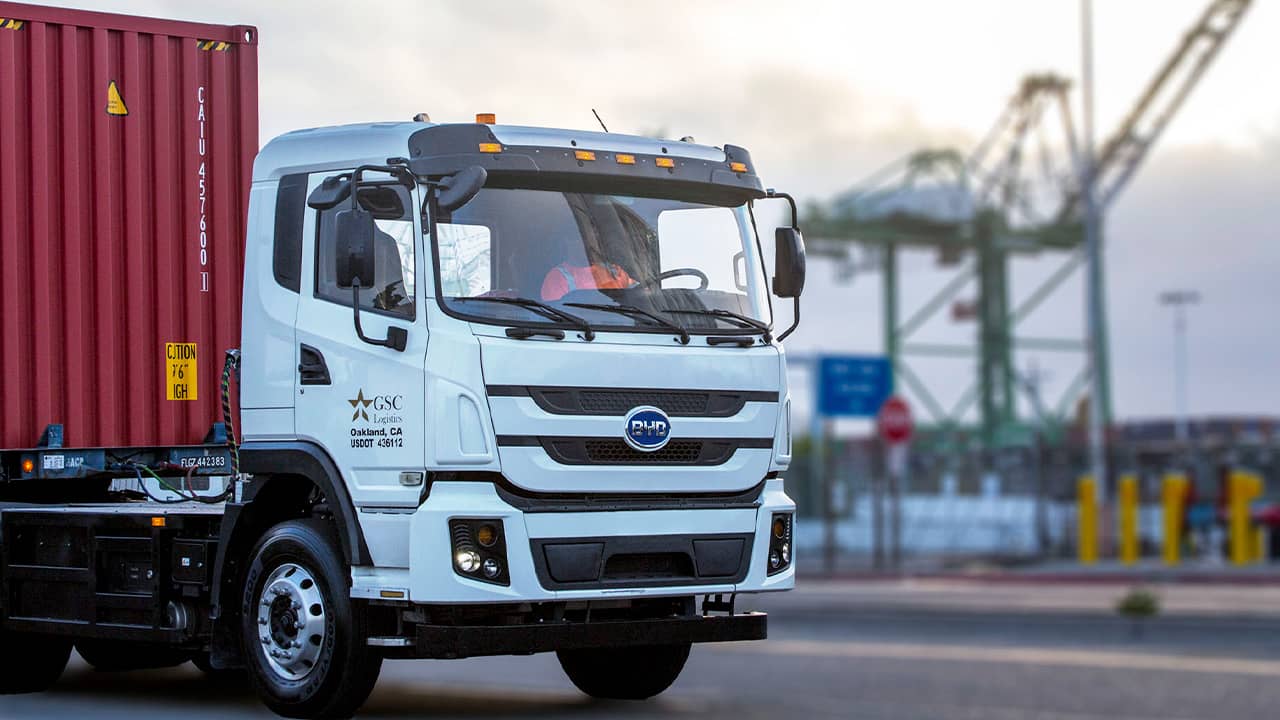 Work used to be much simpler for the California Department of Transportation: widen highways, fill potholes, build new freeways. Alas, those quaint days are gone.
To get an idea of what planners must prepare for, state officials recently hosted a demonstration of a drone air taxi that will require devising a “highway above the ground,” said Reza Navai, a Caltrans transportation planner. “If you think transportation on the ground is complex. …”
Such sci-fi-like transit is one of many high-tech changes coming as California implements its planned electrification of transportation to radically reduce greenhouse-gas emissions. The path to zero, as in zero-emission vehicles, extends well beyond flying taxis and the 5 million electric cars the state hopes will be on its roads by 2030. Everything — everything — will be replaced with an electric analog: from boats, planes and trains to delivery vans to farm tractors and even forklifts. The to-do list stretches as long as California’s seemingly endless blacktop, with freight as a major challenge.
The state’s transportation gurus envision technology that will ping driverless vehicles with an automated message when they stray from their lanes, “smart” roads that charge electric cars and trucks as they pass, and an electrified Interstate 5, the West Coast’s main freight corridor. California already has widened its painted lane stripes to six inches from four so self-driving vehicles can better “see” the road. Ultimately, the highways themselves will be redesigned and constructed with different materials.
California’s transportation agency, which updates its master plan every five years, is currently preparing a look at 2050. While officials cannot predict each new technological wrinkle, Reza said, “we must be able to consider all the possibilities.”

State Has Spent More Than $1 Billion in Last Five Years

To achieve a carbon-free transportation future, California will need to cover a lot more ground in a short time. Los Angeles Pledges to Convert Bus Fleet to Electric by 2030

Few transportation modes have clean-engine options as advanced as those for passenger cars. Buses are the exception. The Chinese company BYD, manufacturing electric buses in Lancaster, is the largest in North America and has produced more than 300 buses, including nearly half of the Antelope Valley Transit Authority’s pool.
The city of Los Angeles has pledged to convert its bus fleet — second-largest in the country — to electric by 2030, though mechanical and performance problems plagued the rollout of its BYD vehicles. Many other transit districts have similar goals and include school buses. The financial burden of those commitments is softened by state vouchers for up to $200,000 toward the purchase of each zero-emission bus.
The availability of some electric all-terrain recreational vehicles, farm machinery and specialty equipment such as cherry-pickers and front-end loaders has produced niche markets. Generally, though, the readily available transportation technology stops where the road ends: Electrification of trains, planes and ships is less advanced.
A state analysis found that ocean-going vessels still depend on heavily polluting marine fuels and, aside from nuclear powered-engines for military use, zero- and near-zero technologies are not currently available. Among smaller vessels, the famed Red and White fleet that tours San Francisco Bay added a hybrid-electric ferry this week. And electric-battery passenger ferries may soon operate in Washington state.
Ships docking in California’s ports frequently forgo using diesel generators to operate and instead plug into shore-side electric power. But even when stationary, big vessels have a massive appetite: A nine-cylinder ship engine — five stories tall and weighing 1,500 tons — can produce enough power to run 30,000 homes for a year.

Trucking Is the Major Freight Challenge for California

The state’s busy docks teem with those ships. About 40% of containerized goods that come into the United States enter through California, said the state’s Environmental Protection Secretary Jared Blumenfeld. Their sulfur-based fuel “has to be heated up before you can use it — very energy-intensive.”

Future is Likely to Include On-Demand Trucking

About 20% of trips in the United States are, in fact, less than a mile. But It’s too late to shut off the merchandise-delivery tap, and freight accounts for about a third of the California Gross Domestic Product.
The influx of these trucks and vans runs counter to one of California’s bottom-line goals: to reduce not just the number of vehicles on roads but also, and more critically, the miles they travel. The mid-sized delivery vans taking the package handoff from heavy-duty trucks are turning over odometers at a dizzying rate; in Southern California, an estimated 85% of truck traffic is dedicated to local deliveries and short hops.
The future is likely to include on-demand trucking. Predictably, there’s an app for that, Uber Freight, which launched in California in 2017. It’s one of a handful of load-matching apps that connect shippers with smaller, more nimble trucks plying local routes. The system is intended to increase efficiency and decrease total miles driven. Additionally, electric trucks can return to a home base at night to be recharged.
The same applies to another innovation expected to ease this delivery-vehicle Sigalert: Widespread adoption of 3D printers that will construct products closer to where consumers live, shrinking delivery areas.
Big rigs in California not subject to the smog inspections that have applied to cars since 1982, partly due to early pushback from trucking companies and insurmountable complexities involved in regulating out-of-state vehicles. But that could change: A bill advancing in the Legislature would create smog checks for big diesel trucks.
Even more efficient parking, with real-time information about empty spots, would allow drivers to use 25% less fuel to find them, according to a recent Caltrans plan.

Only a Handful of Electric or Hybrid Heavy-Duty Trucks

The state will need to retrofit highways to allow charging of electric freight trucks, which some experts say may still be a decade away. Planners are examining exactly what an electric-truck stop would require:  Big trucks need big batteries and very large charging infrastructure.
Utility companies in California, Oregon and Washington are underwriting a study that will examine how to provide electric charging and hydrogen fueling along the entirety of Interstate 5, with bays for next-generation semi-trucks running on batteries or hydrogen gas.
The state air board contributed $41 million to a test program at the port of Los Angeles, which two years ago set aside a mile of highway with an overhead charging system to refuel prototype electric trucks, much like electric cable cars operate. Ten big rigs that run on hydrogen-electric hybrid engines are coming next year, added to 16,000 trucks that work the port every year.
Currently there is only a handful of electric or hybrid heavy-duty trucks, and those are prototypes. State regulators recognize that innovation doesn’t always align with government goals and deadlines and is planning for clean technology where feasible. Like everything else, it’s not going to be cheap.
The cost of an electric semi-tractor trailer, $300,000 and more, is more than twice that of a traditional diesel truck. That can be a burden on mom and pop companies, 90% of whose fleets contain six or fewer trucks and who operate on relatively tight margins.
“It’s going to be tough,” even with state subsidies, said Chris Shimoda, lobbyist for the California Trucking Association.

Shimoda said his members don’t care what type of fuel the state requires. “Everybody knows this is the direction California is going,” he said. “It’s easy to say we have a goal of eliminating fossil fuels, but as I think everyone would admit, the details of how to get there are important.”


“Everybody knows this is the direction California is going. It’s easy to say we have a goal of eliminating fossil fuels, but as I think everyone would admit, the details of how to get there are important.” — Chris Shimoda, lobbyist, California Trucking Association
At the Port of Oakland, with freight-train horns blaring in the background, Taylor said by phone that it’s eerie to see — but not hear — his company’s electric big-rig pull into one of the loading bays. “It kind of sneaks up on you,” he said.
The company has been testing the truck for more than a year, underwritten partly by a state grant, and expects delivery of two more in the fall. Taylor uses the truck to move containers around the port but has yet to put it on the road, echoing the “range anxiety” associated with electric cars. His truck’s battery runs out and needs recharging after 120 miles.
The steep cost of replacing entire trucking fleets with electric vehicles, even with subsidies, may be a burden on small companies, he acknowledged. But improving air quality is a worthy goal.
“I’ve seen myself the difference as the diesel engines have gotten cleaner and cleaner,” Taylor said. “It used to be that with all the trucks working the port, I’d get a headache after an hour or two.” Now he doesn’t.
“I guess it can only get better with electrics,” he said. “I’m not sure how it’s all going to work, but it’s happening.”
CALmatters.org is a nonprofit, nonpartisan media venture explaining California policies and politics.

Is Mayor Brand Free to Lead, a Lame Duck, or Both?