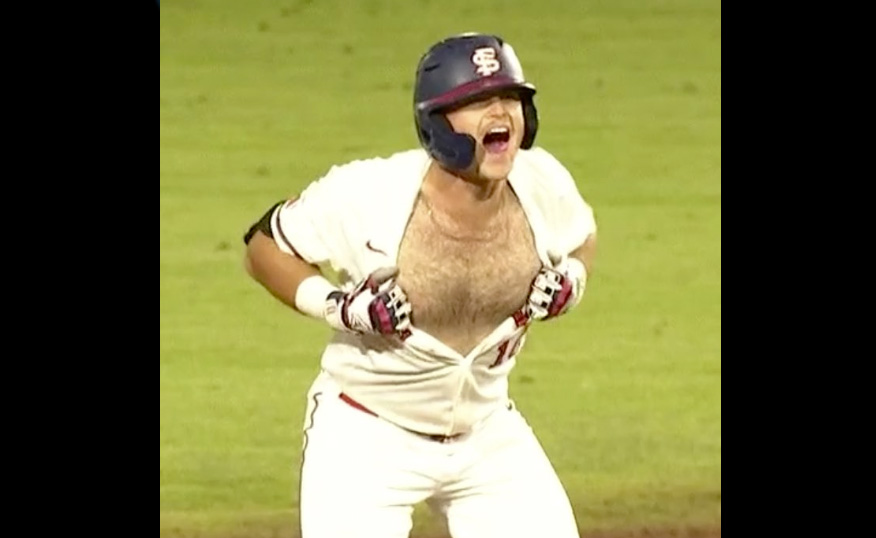 Fresno State’s baseball team is having a big season. Last weekend, a Diamond ‘Dog delivered one of the season’s most memorable moments.
The Bulldogs, champions of the Mountain West Conference, were playing Saturday in an NCAA tournament regional matchup in Palo Alto. Their foe: perennial college baseball power Stanford.
In the sixth inning, with the game knotted at one run each, Fresno State designated hitter Emilio Nogales ripped a bases-loaded double down the left-field line. Two runs came in. Nogales, who finished with three hits in the game, slapped his hands at second base. Then he did this:

.@FresnoStateBSB
The shot that was heard All the way back to Cedar and Barstow!!
Emilio Nogales with the huge 2-run double and then the pose!!!
Top 7
Stanford 1 Fresno State 4 pic.twitter.com/BvhMbVt8m2

Fresno State went on to win the game 7-2. At a post-game news conference, Nogales reflected on his uniform-ripping reaction, which was replayed multiple times on the ESPN telecast.
“Just the heat of the moment.” Nogales said. “I get made fun of for having just a bunch of chest hair and you’ve just got to let it show. If you’ve got it, own it.”
The victory put Fresno State in the regional final Sunday, again against Stanford. This time, any heroics fell short and all jerseys remained buttoned; the Cardinal won 8-6, setting up a winner-take-all game against Stanford at 7 p.m. Monday on the Cardinal’s home field.
If the Bulldogs, now 40-15-1 overall, can prevail, they move on to an NCAA Super Regional. If they lose, a memorable season is over.

We’ll just go ahead and leave this here.