Kids hoping to cool off Sunday at several Fresno splash parks got the hot shoulder.

The water wasn’t working at Inspiration Park in west Fresno.

Youngsters and their parents fared no better at Figarden Loop Park or Todd Beamer Park. Meanwhile, temperatures peaked in the low 90s.

The city said an electrical issue was the likely cause of the problems. They hope to have the water back on Monday.

The splash park at Vinland Park in central Fresno was working Sunday. But people there say the water shut off at 5 p.m. The water parks are supposed to operate until 6 p.m.

The State Center Community College District Board will be asked again to allow a third-party company to run its bookstore and send layoff notices to 14 full-time equivalent and 19 seasonal employees.

Last month, the board deadlocked 3-3 to turn over operation of the bookstore to Follett Higher Education Group. The Illinois-based company already runs the bookstores at Fresno State and Fresno Pacific University.

The difference Tuesday is Trustee Richard Caglia. He was absent last month when the vote occurred.

He told Politics 101 he hasn’t made a decision on how he would vote.

The district hasn’t released financial documents indicating how much Follett would pay the district. In its deal with Fresno State that went into effect in April, Follett pays an 8.5% commission for the first $9 million in sales, then 10.5% after that. The minimum payment to Fresno State is $625,000 for the first two years of the five-year deal.

One other difference in the Fresno State and SCCCD deals is that employees at the Kennel Bookstore remain school employees. The contract calls for Follett to repay the university employment expenses. 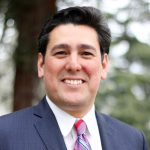 Phil Arballo announced on Twitter he is dropping his Fresno City Council campaign, for both the August special election and the regular March 2020 vote.

This is the second time Arballo announced he is exiting the election to replace Steve Brandau, who left the city council for the Fresno County Board of Supervisors in April.

As of today I am ending my campaign for City Council D2. This includes the Aug ‘19 special election & the March ‘20 primary. I’ll be making an announcement next week about my plans on wanting to continue to serve our Valley communities. – PA

Valley Public Radio (FM 89.3) is changing the time for “The California Report.” The nine-minute segment covering issues up and down the state, produced by San Francisco’s KQED, is heard at 6:50 a.m., with a rebroadcast at 7:50 a.m.

A segment of the “Marketplace Morning Report” will air in the 7:50 a.m. timeslot.