TEHRAN, Iran — Iran’s foreign minister traveled Friday to China on his Asian tour aimed at keeping world markets open to Tehran amid an intense sanctions campaign from the U.S. as tensions across the Persian Gulf remain high.

Concerns about a possible conflict have flared since the White House ordered warships and bombers to the region to counter an alleged, unexplained threat from Iran that has seen America order nonessential diplomatic staff out of Iraq.

Tensions have also ratcheted up in the region after authorities alleged that a sabotage operation targeted four oil tankers on Sunday off the coast of the United Arab Emirates, and Iran-aligned rebels in Yemen claimed responsibility for a drone attack Tuesday on a crucial Saudi oil pipeline.

Saudi Arabia directly blamed Iran for the drone assault, and a local newspaper linked to the Al Saud royal family called on Thursday for America to launch “surgical strikes” on Tehran.

This all takes root in President Donald Trump’s decision last year to withdraw the U.S. from the 2015 nuclear accord between Iran and world powers and impose wide-reaching sanctions. But Trump took a soft tone Thursday, a day after tweeting that he expected Iran to look for talks. Asked if the U.S. might be on a path to war with the Iranians, the president answered, “I hope not.” 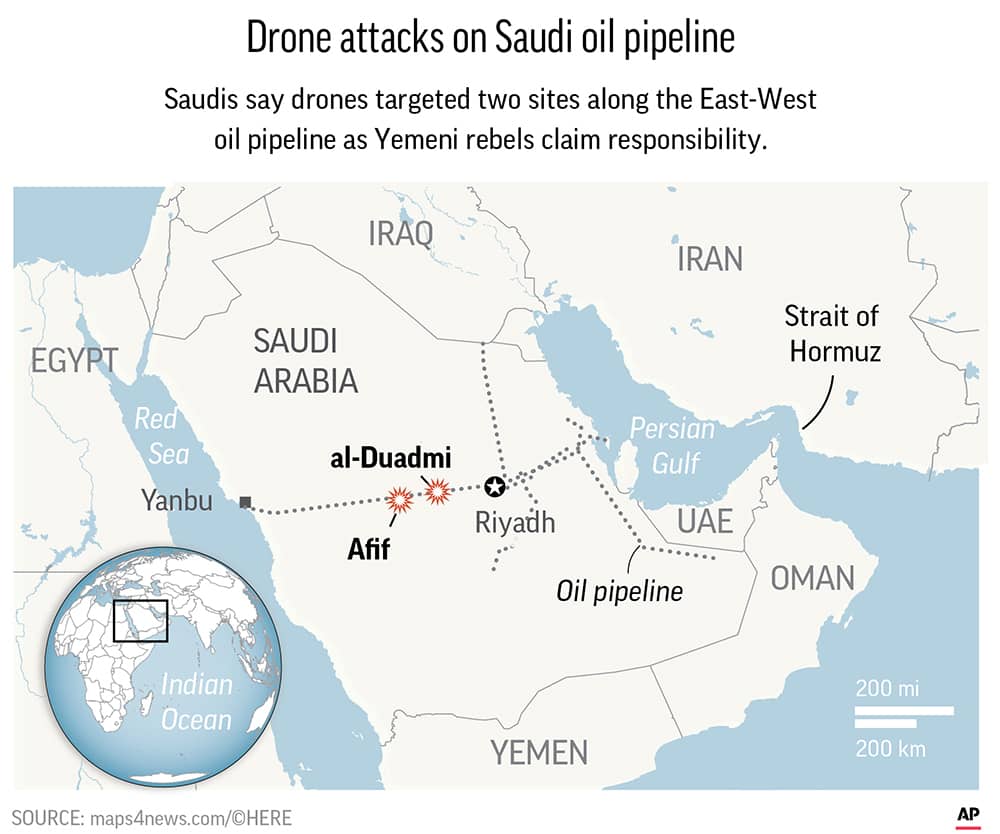 Pointing a Gun at Someone and Demanding Friendship

Imposing sanctions while seeking talks is like “pointing a gun at someone and demanding friendship,” said Iranian Gen. Rasool Sanaeirad, according to the semi-official Mehr news agency.

“So far, the international community has mainly made statements instead of saving the deal. The practical step is quite clear: economic relations with Iran should be normalized. This is what the deal clearly addresses.” — Iranian Foreign Minister Mohammad Javad Zarif

That comment was echoed by Majid Takht-e Ravanchi, Iran’s ambassador to the United Nations.

“They want to have the stick in their hands, trying to intimidate Iran at the same time calling for a dialogue,” Ravanchi told CBS. “What type of dialogue is this?”

For his part, Trump criticized the media in a tweet Friday about Iran and added: “At least Iran doesn’t know what to think, which at this point may very well be a good thing!” Since the White House’s decision May 5 to deploy the bombers and aircraft carrier, the U.S. government has declined repeated requests to publicly explain the new threat they perceive coming from Tehran.

On Friday, Zarif arrived in Beijing to speak to his Chinese counterpart. China was one of the signatories on Iran’s 2015 nuclear deal with world powers, which saw it limit its enrichment of uranium in exchange for the lifting of crushing economic sanctions.

“So far, the international community has mainly made statements instead of saving the deal,” Zarif said, according to a report by the state-run IRNA news agency. “The practical step is quite clear: economic relations with Iran should be normalized. This is what the deal clearly addresses.”

Bringing Iran Closer to Being Able to Develop a Nuclear Weapon

Iran recently said it would resume enriching uranium at higher levels if a new nuclear deal is not reached with Europe by July 7. That would potentially bring it closer to being able to develop a nuclear weapon, something Iran insists it has never sought.

The USS Abraham Lincoln and its carrier strike group have yet to reach the Strait of Hormuz, the narrow mouth of the Persian Gulf through which a third of all oil traded at sea passes. A Revolutionary Guard deputy warned that any armed conflict would affect the global energy market. Iran long has threatened to be able to shut off the strait.

“If a war happens, the world will suffer from problem in energy supply,” Gen. Saleh Jokar said, according to a report Friday by the semi-official Fars news agency.

He also said Iran’s short-range missiles “can easily reach present warships in the Persian Gulf,” while noting the 2,000-kilometer (1,240-mile) range of the Islamic Republic’s ballistic missiles can reach across the wider Persian Gulf.

The U.S. Navy’s 5th Fleet, which patrols the Persian Gulf from its base in Bahrain, did not immediately respond to a request for comment. However, the USS McFaul and the USS Gonzalez, two Arleigh Burke-class destroyers, transited the strait on Thursday without incident.

Also on Friday, Britain’s Foreign Office advised against all travel to Iran by British-Iranian dual nationals. The government said the upgraded travel warning is in response to Iran’s “continued arbitrary detention and mistreatment” of dual nationals and of Iranian citizens working for institutions linked to Britain.

Benchmark Brent crude traded near $73 a barrel on Friday, up around half a percent.