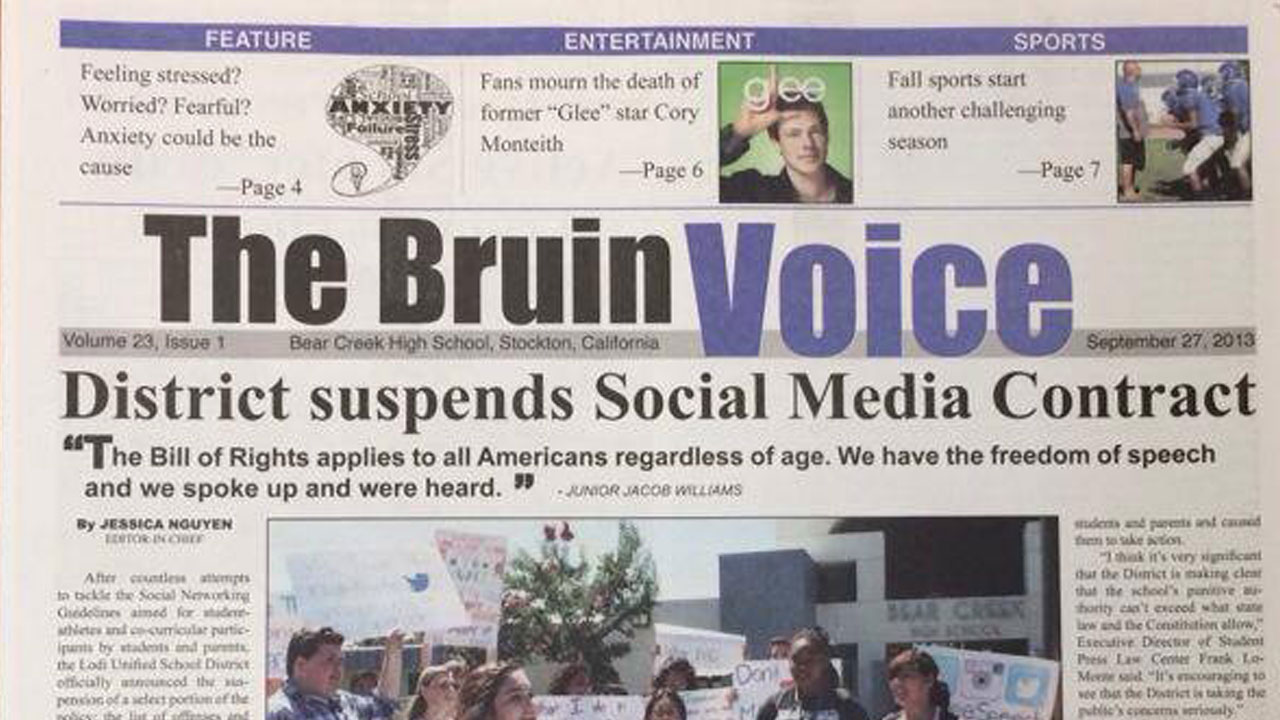 The paper’s adviser, English teacher Kathi Duffel, had accused district officials of censorship after they demanded to review and approve the article before publication. In an April 11 letter, district Superintendent Cathy Nichols-Washer warned of possible discipline, “up to and including dismissal” if she refused.

Duffel refused on free speech grounds, and officials in the San Joaquin Valley district, which has about 31,500 students, agreed to let an attorney review the story. Matthew Cate, who represents Duffel and the student who wrote the article for the school’s paper, The Bruin Voice, concluded that the story didn’t violate education codes.

A lawyer for the district, Paul Gant, wrote to Cate Wednesday to say the district wouldn’t prevent publication of the story. But Gant also called Duffel insubordinate for refusing to submit the article for review, and said, “There is no question that the article could be lawfully reviewed or censored,” the San Francisco Chronicle reported.

“Because the district has been denied an opportunity to preview the article, the district does not endorse it,” the district said in a statement. “Because we are charged with the education and care of our community’s children, we will always be diligent in our efforts to provide a safe learning environment for all students, while complying with our obligations under the law.”

Duffel had told the paper that the article doesn’t glamorize pornography, but it “will help students think more critically about the choices they do make at this age in their lives.”

The student who was interviewed said she wanted to dispel rumors. “I’m 18, what I’m doing is legal, and I don’t see why everyone is making such a big deal out of it,” Caitlin Fink said.

Bruin Voice news editor Bailey Kirkeby wrote the article. “I am very proud of the story and how it turned out,” she told the Chronicle.

California law ensures that the First Amendment applies to student journalists. It prohibits prior restraint of school newspaper stories unless they are obscene, libelous or slanderous or incite unlawful acts or school disruptions.

Duffel’s students “are getting a front-row seat to our government in action,” she told the Chronicle. “What better way to teach the value of the First Amendment than by teaching them firsthand not to have their voices silenced?”

Duffel has relied on the law before to block censorship attempts over her nearly three decades advising the Bruin Voice. For example, in 2013 the principal at the time confiscated 1,700 copies of the newspaper when students exposed inaccuracies in the school safety handbook.

Unemployment Hits 49-Year Low as US Employers Step up Hiring