MINNEAPOLIS — After three weeks of testimony, a jury needed little more than a day to convict a black Minneapolis police officer of murder in the fatal shooting of an unarmed white woman who had called 911 to report a possible crime, delivering a guilty verdict that immediately sparked questions about whether race played a role.

“Officer Noor was going to jail no matter what because he’s a black man who shot a white woman in the state of Minnesota.” — John Thompson, an activist and friend of Philando Castile

Mohamed Noor was also convicted Tuesday of manslaughter in the July 2017 death of Justine Ruszczyk Damond, a 40-year-old dual citizen of the U.S. and Australia whose death bewildered and angered people in both countries.

Noor, 33, testified that he and his partner heard a loud bang on their squad car that startled them, and that he fired “to stop the threat” after he saw a woman appear at his partner’s window raising her arm. Prosecutors questioned whether the bang happened and attacked Noor for not seeing a weapon or Damond’s hands before he fired.

It’s rare for police officers to be convicted after asserting they fired in a life-or-death situation, but some Minnesota community members said they saw it coming for Noor because he is Somali American.

“Officer Noor was going to jail no matter what because he’s a black man who shot a white woman in the state of Minnesota,” said John Thompson, an activist and friend of Philando Castile, a black man who was killed in 2016 by a Latino suburban police officer who was acquitted.

Alana Ramadan, an African American and Muslim who held a sign calling for the resignation of Hennepin County’s head prosecutor, said the African American people she’s spoken with knew Noor would be convicted.

Hennepin County Attorney Mike Freeman dismissed the idea that race played a role in the case. 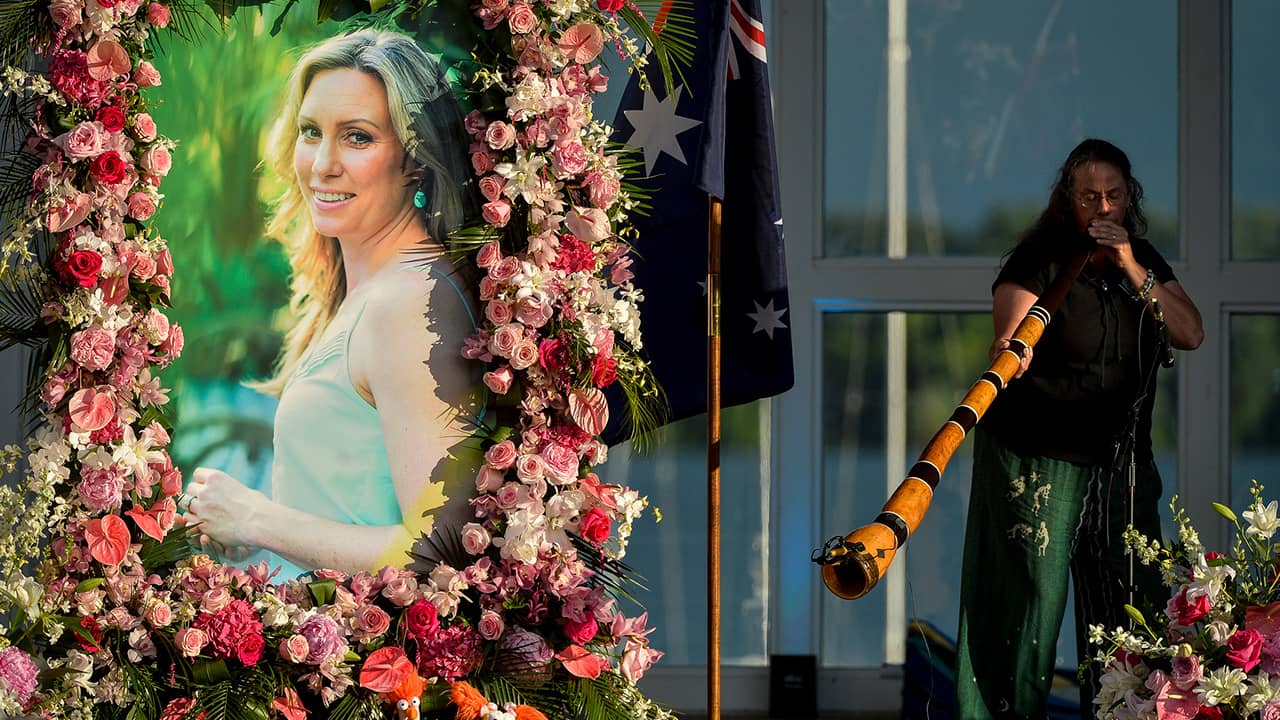 FILE – In this Aug. 11, 2017, file photo, Johanna Morrow plays the didgeridoo during a memorial service for Justine Ruszczyk Damond at Lake Harriet in Minneapolis. The trial of former Minneapolis police officer Mohamed Noor, who fatally shot Damond, an unarmed woman who called 911, has revealed possible missteps by police and investigators. (Aaron Lavinsky/Star Tribune via AP, File)

Noor Was Handcuffed and Taken Into Custody Immediately

“That simply is not true,” he said. “Race has never been a factor in any of my decisions and never will be. … We look at each case based on the facts and the evidence and the law that’s in front of us. And I will stand by what we have done.”

When asked how Noor’s case was different, Freeman, who has chosen not to charge some white officers in the past, said: “The evidence showed that the officer acted unreasonably.”

“Justine was killed by a police officer, an agent of the state. We believe he was properly charged with a crime.” — John Ruszczyk, Damond’s father

Noor, a two-year veteran who testified that he shifted to policing from a career in business because he “always wanted to serve,” was acquitted of the most serious charge of intentional second-degree murder.

He faces up to 15 years on the third-degree murder conviction and nearly five years on the manslaughter conviction, although judges aren’t bound by state sentencing guidelines and can impose much lower sentences.

Noor was handcuffed and taken into custody immediately despite his attorney’s request that he be free on bond pending sentencing June 7. He showed no visible emotion and did not look back at his family, but his wife was crying.

Damond’s father, John Ruszczyk, said the jury’s decision reflected respect for the rule of law and the sanctity of life.

“Justine was killed by a police officer, an agent of the state,” he said. “We believe he was properly charged with a crime.”

Ruszczyk also bitterly criticized police, saying the family believes “the conviction was reached despite the active resistance of a number of Minneapolis police officers, including the head of the union, and either active resistance or gross incompetence” by state investigators early on.

Minnesota’s third-degree murder charge means causing the death of another through a dangerous act “without regard for human life but without intent to cause” death. Second-degree manslaughter is defined as creating unreasonable risk of causing death or great bodily harm to another through culpable negligence.

Noor and his partner were rolling down the alley behind Damond’s home and checking out the 911 call just before the shooting. Both men testified about a loud noise on the squad car. 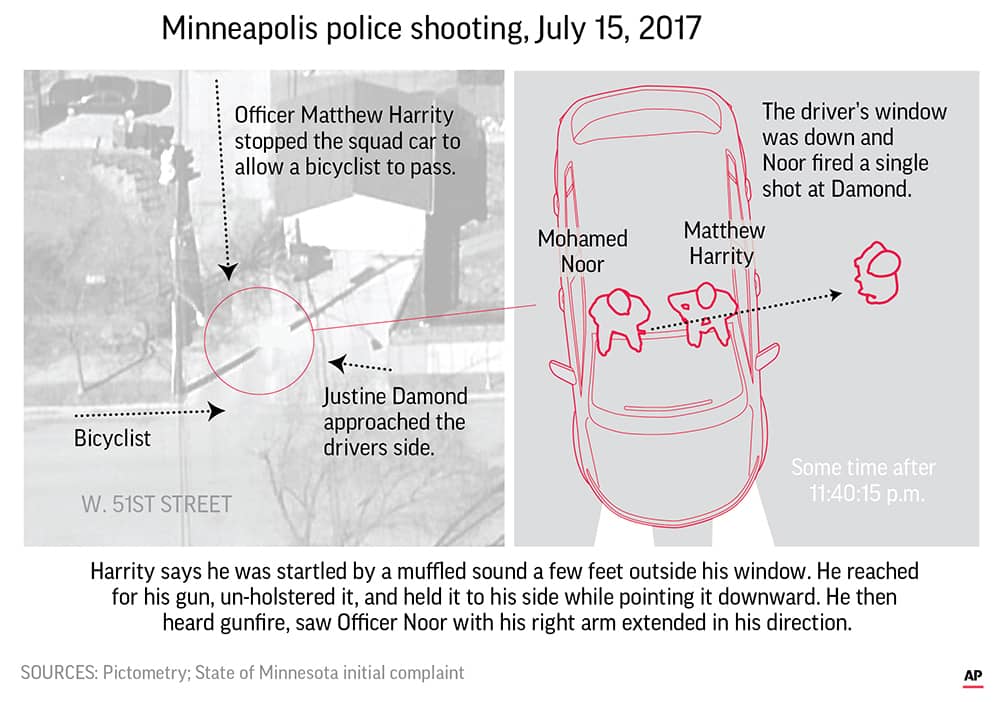 A Minneapolis police officer shot and killed an unarmed woman who approached his squad car.

Neither Officer Had a Body Camera Running When Damond Was Shot

But while Noor described a decision to fire based on what he felt was a threat, Harrity testified that he hadn’t finished analyzing the situation before his partner fired. When prosecutor Amy Sweasy asked Harrity whether that meant it would have been premature for him to fire, he agreed.

The death of Damond, a life coach who was engaged to be married a month after the shooting, sparked outrage in both the U.S. and Australia. It also cost Minneapolis’ police chief her job and contributed to the electoral defeat of the city’s mayor a few months later.

Neither officer had a body camera running when Damond was shot. Both switched on their cameras in time to capture the aftermath, which included their attempts to save Damond with CPR.

Neither officer had a body camera running when Damond was shot. Both switched on their cameras in time to capture the aftermath, which included their attempts to save Damond with CPR. But Noor’s bullet hit her in a key abdominal artery, and a medical examiner testified she lost so much blood so quickly that even faster medical care might not have saved her.

Prosecutors sought to raise questions about the way police and state investigators handled the aftermath. They played excerpts from body cameras worn by responding officers that revealed many officers turning them on and off at will; one officer could be heard on his camera at one point telling Noor to “keep your mouth shut until you have to say anything to anybody.” They also highlighted the lack of forensic evidence proving Damond touched the squad car.

But the case still came down to jurors’ assessment of whether Noor was justified in shooting, and they had only the officers’ testimony for a picture of the key moments. During his closing argument Monday, defense attorney Thomas Plunkett told jurors all that mattered was the “precise moment” in which Noor fired his gun and that they needed to consider whether Noor acted as a reasonable officer would act in the same circumstances. Sweasy argued the shooting was not justified.

The jury included 10 men and two women. Six of the jurors, including the two women, are people of color.

Noor is among the many Somali immigrants who settled in Minnesota after coming to America due to civil war in his home country. His hiring was celebrated by city leaders eager to diversify the police force in a city rich in immigrants.

After he was charged, he was fired.