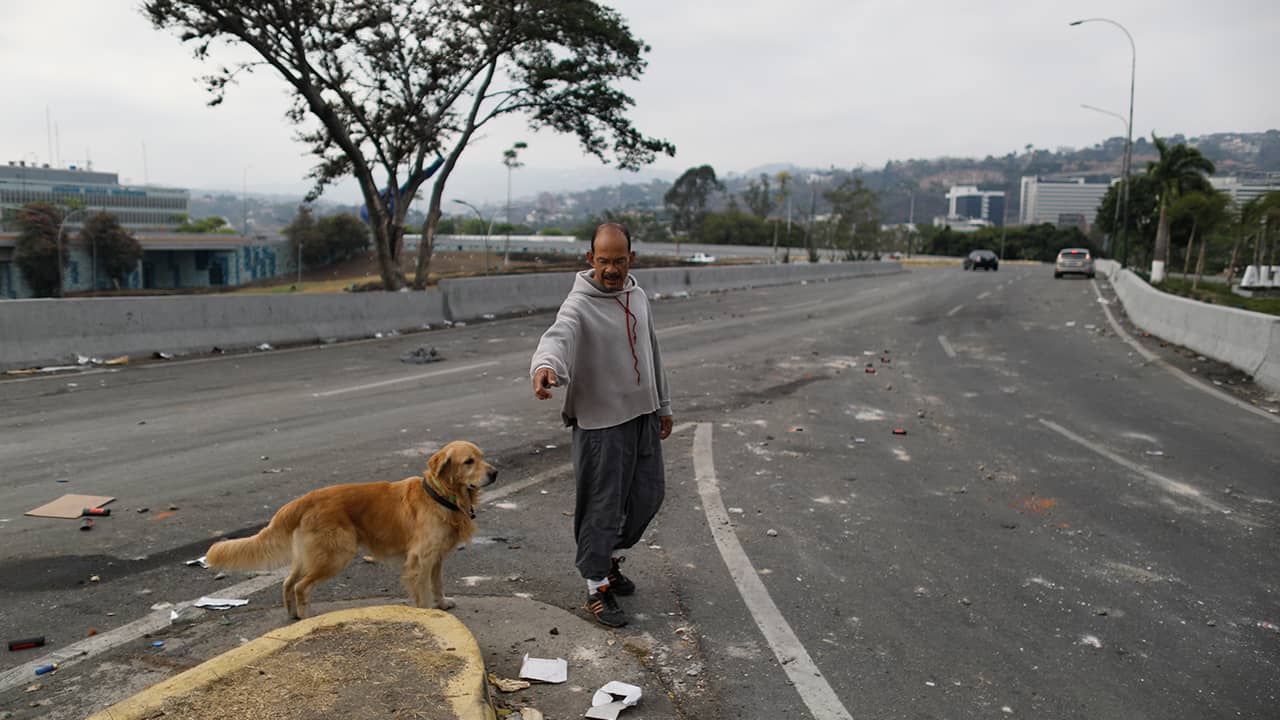 CARACAS, Venezuela — Wary Venezuelans braced for another day of upheaval Wednesday as both the opposition and Nicolás Maduro’s loyalists vowed to take to the streets, hoping to tip the balance in an agonizing power struggle that appeared to grow even more desperate after a so far unsuccessful attempt to spark a military uprising.

Johanns Davila, 61, walked his dog through a street in Venezuela’s capital littered with shotgun shells, tear gas canisters and a charred motorcycle where skirmishes between the opposition and state security broke out a day before.”This is a war zone,” he said.Opposition leader Juan Guaidó stunned the nation Tuesday when he appeared on a video at dawn surrounded by a few dozen national guardsmen urging troops to abandon Maduro and join those clamoring for the socialist leader’s ouster.But while the call to action spurred protests around the nation, only a small group of soldiers left their commands. By the end of the day, it was clear that a quick end to the protracted standoff was still out of sight.

A defiant Maduro, who had been absent throughout the tense day, emerged on state television late Tuesday night surrounded by his closest advisers, blasting the plot as a U.S.-backed coup attempt and vowing to take action.

“This cannot go unpunished,” he said.

The bold and risky move by 35-year-old lawmaker Guaidó, who is recognized by the U.S. and over 50 nations as Venezuela’s rightful president, is likely to force Maduro to make a decision on whether to let his adversary remain a free man. Men look to recover usable parts from motorcycles burned during the previous day’s clashes between anti-government protesters and security forces in Caracas, Venezuela, Wednesday, May 1, 2019. Venezuela’s capital is awakening to a tense calm as the country prepares for a new round of protests after a dramatic day of political upheaval, with opposition leader Juan Guaido calling for Venezuelans to fill streets around the country later Wednesday morning to demand President Nicolas Maduro’s ouster. (AP Photo/Ariana Cubillos)

“Failing to arrest Mr. Guaidó would be perceived as an important sign for weakness from Mr. Maduro. But arresting Mr. Guaidó risks a strong counter-reaction from the U.S.” — Giancarlo Morelli, with the British analysis group Economist Intelligence Unit

“Failing to arrest Mr. Guaidó would be perceived as an important sign for weakness from Mr. Maduro,” Morelli said. “But arresting Mr. Guaidó risks a strong counter-reaction from the U.S.,” which has been ratcheting up sanctions.

With both sides looking to secure a grip on power, Wednesday’s demonstrations could be a sign of what’s to come.

“We need to keep up the pressure,” Guaidó said in a video released to his followers on social media. “We will be in the streets.”

The upheaval marked the most serious threat yet to Maduro’s contested rule.

Tuesday’s turmoil began with Guaidó’s video, shot near the Carlota air base. In a surprise, Leopoldo Lopez, Guaidó’s political mentor and the nation’s most-prominent opposition activist, stood alongside him. He had been detained in 2014 for leading a previous round of anti-government unrest, and Lopez said he had been released from house arrest by security forces following an order from Guaidó.

As the two opposition leaders coordinated actions from a highway overpass, troops loyal to Maduro fired tear gas from inside the adjacent air base.

Amid the mayhem, several armored utility vehicles careened over a berm and drove at full speed into the crowd. Two demonstrators, lying on the ground with their heads and legs bloodied, were rushed away on a motorcycle as the armored vehicles sped away dodging gasoline bombs thrown by the demonstrators.

The head of a medical center near the site of the street battles said doctors were treating over 50 people, about half of them with injuries suffered from rubber bullets. The Venezuelan human rights group Provea said a 24-year-old man was fatally shot during an anti-government protest in the city of La Victoria.

Later Tuesday, Lopez and his family sought refuge in the Chilean ambassador’s residence and later moved to the Spanish Embassy.

Amid the unrest, Maduro’s military commanders went on state television to proclaim their loyalty. Flanked by top generals, Defense Minister Vladimir Padrino López condemned Guaidó’s move as a “terrorist” act and “coup attempt” that was bound to fail like past uprisings.

But in a possible sign that Maduro’s inner circle could be fracturing, the head of Venezuela’s feared SEBIN intelligence agency wrote an open letter breaking ranks with the embattled leader. Manuel Ricardo Cristopher Figuera said he had always been loyal to Maduro but now it is time to “rebuild the country.” He said corruption has become so rampant that “many high-ranking public servants practice it like a sport.”

By the End of the Day the Opposition Seemed Outmaneuvered

“The hour has arrived for us to look for other ways of doing politics,” Figuera wrote.

Like past attempts to oust Maduro, by the end of the day the opposition seemed outmaneuvered.

U.S. Secretary of State Mike Pompeo claimed Maduro had an airplane “on the tarmac” Tuesday morning and was ready to flee but was dissuaded by “Russians.” Maduro ridiculed that idea in his TV speech, adding: “Mr. Pompeo, what lack of seriousness.”

The opposition’s hoped for split in the military didn’t emerge, a plane that the United States claimed was standing by to ferry Maduro into exile never took off and by nightfall, López had quietly sought refuge with his family in a foreign embassy.

U.S. Secretary of State Mike Pompeo claimed Maduro had an airplane “on the tarmac” Tuesday morning and was ready to flee but was dissuaded by “Russians.” Maduro ridiculed that idea in his TV speech, adding: “Mr. Pompeo, what lack of seriousness.”

Guaidó said he called for the uprising to restore a constitutional order broken when Maduro was sworn in earlier this year for a second term following a presidential election boycotted by the opposition and considered illegitimate by dozens of countries.

Davila, who was out walking his dog Wednesday, said despite the turmoil, he was encouraged by the opposition’s bold moves and would join them in protesting.

“We need to get people out,” he said, “and recover the country.”

WikiLeaks’ Assange Gets 50 Weeks in Prison for Jumping Bail