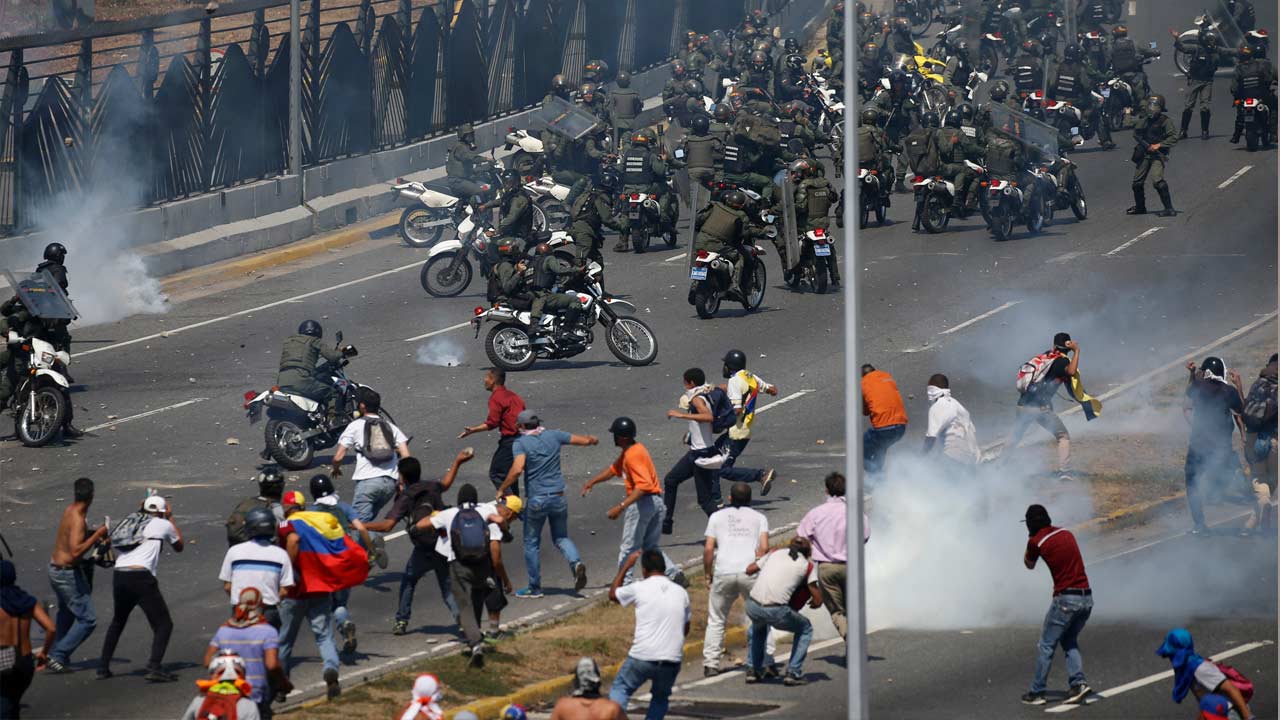 CARACAS, Venezuela — Anti-government demonstrators clashed with troops loyal to Venezuela President Nicolas Maduro at an air base in the capital hours after opposition leader Juan Guaidó took to the streets in a bold and risky attempt to lead a military uprising against the embattled socialist.
The early-morning rebellion seems to have only limited military support.
But it was by far the most-serious challenge yet to Maduro’s rule since Guaidó, with the backing of the U.S. and dozens of other countries, declared himself the country’s interim president in January in rejection of a government he accused of stealing last year’s presidential election.

The dramatic events began early Tuesday when Guaidó, flanked by a few dozen national guardsmen and some armored crowd control vehicles, released a three-minute video filmed near a Caracas air base in which he called on civilians and others in the armed forces to join a final push to topple Maduro.


Flanked by top military commanders, Defense Minister Vladimir Padrino López appeared on national television and condemned Guaido’s move as a “terrorist” act that was bound to fail.
In a surprise, standing alongside him was Leopoldo Lopez, his political mentor and the nation’s most-prominent opposition activist, who has largely been silent and unseen since he was detained in 2014 for leading a previous round of anti-government unrest. Lopez said he had been released from house arrest by security forces adhering to an order from Guaidó.
“I want to tell the Venezuelan people: This is the moment to take to the streets and accompany these patriotic soldiers,” Lopez declared.
As the two opposition leaders coordinated actions from vehicles parked on a highway overpass, troops loyal to Maduro sporadically fired tear gas from inside the adjacent Carlota air base.
A crowd that quickly swelled to a few thousand scurried for cover, reassembling later with Guaidó to a nearby plaza.
A smaller group of masked youths stayed behind on the highway, firing rocks and Molotov cocktails in an attempt to storm the air base. Amid the mayhem, an armored utility vehicle drove at full speed into the crowd. It was unclear if anyone was hurt.
“It’s now or never,” said one of the young rebellious soldiers, his face covered in the blue bandanna worn by the few dozen soldiers joining the “Operation Freedom” insurrection.

Amid the confusion Maduro tried to project an image of strength, saying he had spoken to several regional military commanders who reaffirmed their loyalty to his socialist revolution.
“Nerves of steel!,” he said in a message posted on Twitter.
The events, playing out in the opposition’s stronghold in a wealthier neighborhood of eastern Caracas, appeared not to have triggered a broader military revolt.
Flanked by top military commanders, Defense Minister Vladimir Padrino López appeared on national television and condemned Guaido’s move as a “terrorist” act that was bound to fail.
Meanwhile, Foreign Minister Jorge Arreaza said the “right-wing extremists” would not succeed in fracturing the armed forces, which have largely stood with the socialist leader throughout the months of turmoil.


Guaidó said the troops who had taken to the streets were protecting Venezuela’s constitution and that in the coming hours he would release a list of top commanders supporting the uprising.
“Since 2002, we’ve seen the same pattern,” he told The Associated Press, adding that most of Caracas was calm. “They call for violence, a coup, and send people into the streets so that there are confrontations and deaths. And then from the blood they try to construct a narrative,”

Hundreds of government supporters, some of them brandishing firearms, gathered at the presidential palace, answering the call by socialist leaders to come to the embattled Maduro’s rescue.
“It’s time to defend the revolution with arms,” Valentin Santana, head of a militant group, said in a video posted on social media as he brandished an automatic rifle.
Guaidó said the troops who had taken to the streets were protecting Venezuela’s constitution and that in the coming hours he would release a list of top commanders supporting the uprising.
Anti-government demonstrators gathered in several other cities, although there were no reports that Guaidó’s supporters had taken control of any military installations.
“The armed forces have taken the right decision,” said Guaidó. “With the support of the Venezuelan people and the backing of our constitution they are on the right side of history.”

In the U.S., Vice President Mike Pence, Secretary of State Mike Pompeo and national security adviser John Bolton all expressed support for the opposition.
“We are with you!” Pence tweeted, in the most direct message of the three. “America will stand with you until freedom & democracy are restored.”
“The U.S. Government fully supports the Venezuelan people in their quest for freedom and democracy,” Pompeo said on Twitter. “Democracy cannot be defeated.”
Meanwhile, Spain’s caretaker government urged restraint, while the governments of Cuba and Bolivia reiterated their support for Maduro.
“We hope with all of our strength that there is no bloodshed. We support a peaceful democratic process in Venezuela. We support the immediate holding of an election for a new president,” Spanish government spokeswoman Isabel Celaá said.

Enigmatic Beluga Whale off Norway so Tame People Can Pet It