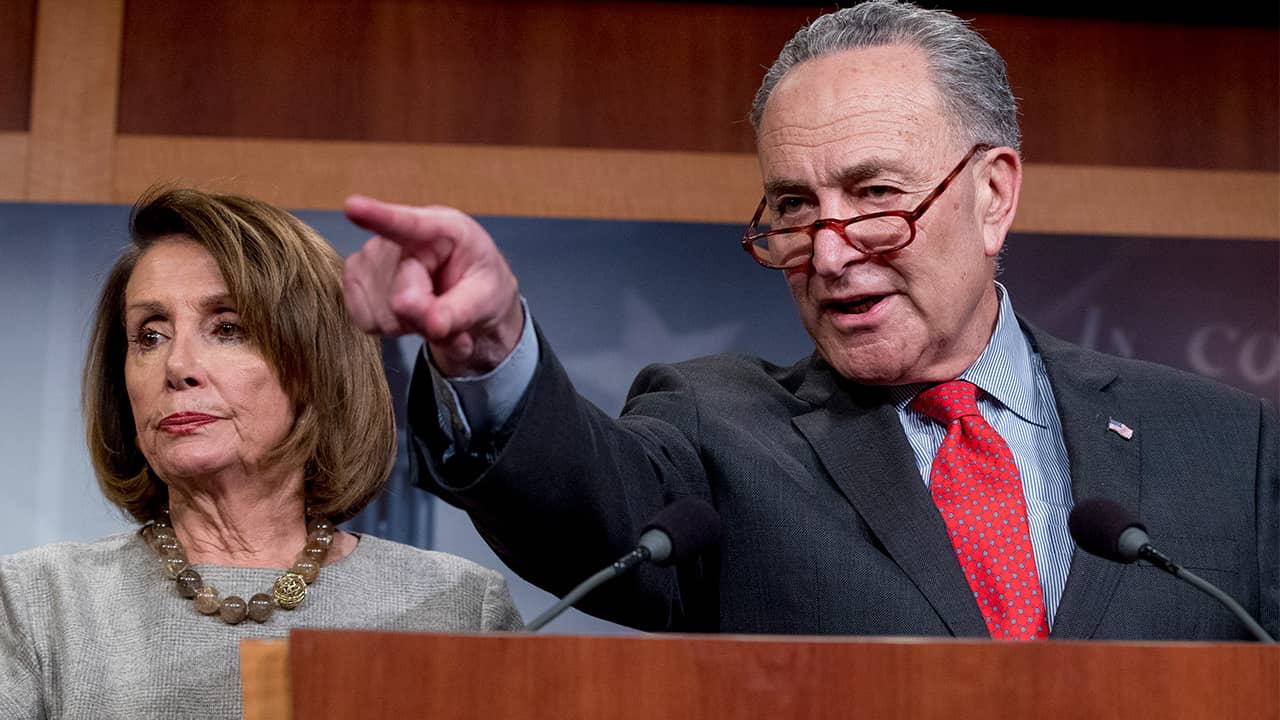 WASHINGTON — President Donald Trump and Democratic congressional leaders agreed Tuesday to work together on a $2 trillion infrastructure package — but put off for later the difficult question of how to pay for it.
Senate Minority Leader Chuck Schumer said there was “good will in the meeting” — a marked departure from the last meeting between Trump, Schumer and House Speaker Nancy Pelosi, which ended with Trump walking out in a huff. Schumer said the two sides agreed that infrastructure investments create jobs and make the United States more competitive economically with the rest of the world.
Most importantly, Schumer said, “we agreed on a number.”
“Originally, we had started a little lower. Even the president was eager to push it up to $2 trillion, and that is a very good thing,” Schumer said.
Added Pelosi: “We did come to one agreement: that the agreement would be big and bold.”


Related Story: $9 For Gallon of Gas in California? Don't Believe It.

But one big issue is how to pay for the repairs. The nation’s top business groups and labor unions support increasing the federal tax, currently 18.3 cents a gallon. It was last raised in 1993.
Asked whether Trump supports raising the gas tax, White House adviser Kellyanne Conway said: “This president is the guy who lowers taxes.”
Conway acknowledged that “there’s no question” that infrastructure repairs need to be paid for.

The last time Trump sat down with Pelosi and Senate Democratic leader Chuck Schumer, the president walked out in a huff and dismissed their government shutdown talks as a “total waste of time.”

The Two Sides Also Have Some Competing Priorities

Pelosi has dozens of new Democratic House members who won in competitive districts, said Shuster, and “they need to be able to go home next year and say they’ve accomplished something.”
But the two sides also have some competing priorities that will complicate matters. The president and Republican leaders want to speed up the permitting process for building energy and transportation projects and that’s not on most Democratic lawmakers’ to-do lists. Democrats are looking for ways to pay for greater infrastructure spending without adding to the national debt, and that could mean higher fuel taxes.
Pelosi and Schumer on Monday sent Trump a letter setting out their priorities, including a call for “substantial, new and real revenue” and investments to make infrastructure more resilient to climate change. Neither of those bolsters confidence in prospects for a deal. Several Democratic lawmakers from committees with jurisdiction on infrastructure issues are also expected to attend the White House meeting, but no Republican lawmakers.
Committees in both chambers of Congress have started to lay the groundwork for an infrastructure bill through hearings, with Democratic lawmakers hoping to have legislation ready for consideration by June or July.
The House Transportation and Infrastructure Committee will give every House lawmaker a chance to share their infrastructure priorities on Wednesday.
Then, the committee’s chairman, Rep. Peter DeFazio, D-Ore., will lead a delegation to visit a dilapidated, century-old tunnel that connects New Jersey and New York. Experts say a new tunnel is essential to ensuring reliable rail travel throughout the Northeast, but the price tag will be steep.

The Federal Tax on Gasoline Now Stands at 18.3 Cents per Gallon

The infrastructure issue has aligned the nation’s top business groups and unions, a rarity in Washington. The U.S. Chamber of Commerce has proposed increasing the federal fuel tax 5 cents a year for five years, then allowing it to increase with inflation. The federal tax on gasoline now stands at 18.3 cents per gallon and at 24.3 cents per gallon for diesel fuel. The last time the federal gas tax went up was in 1993.