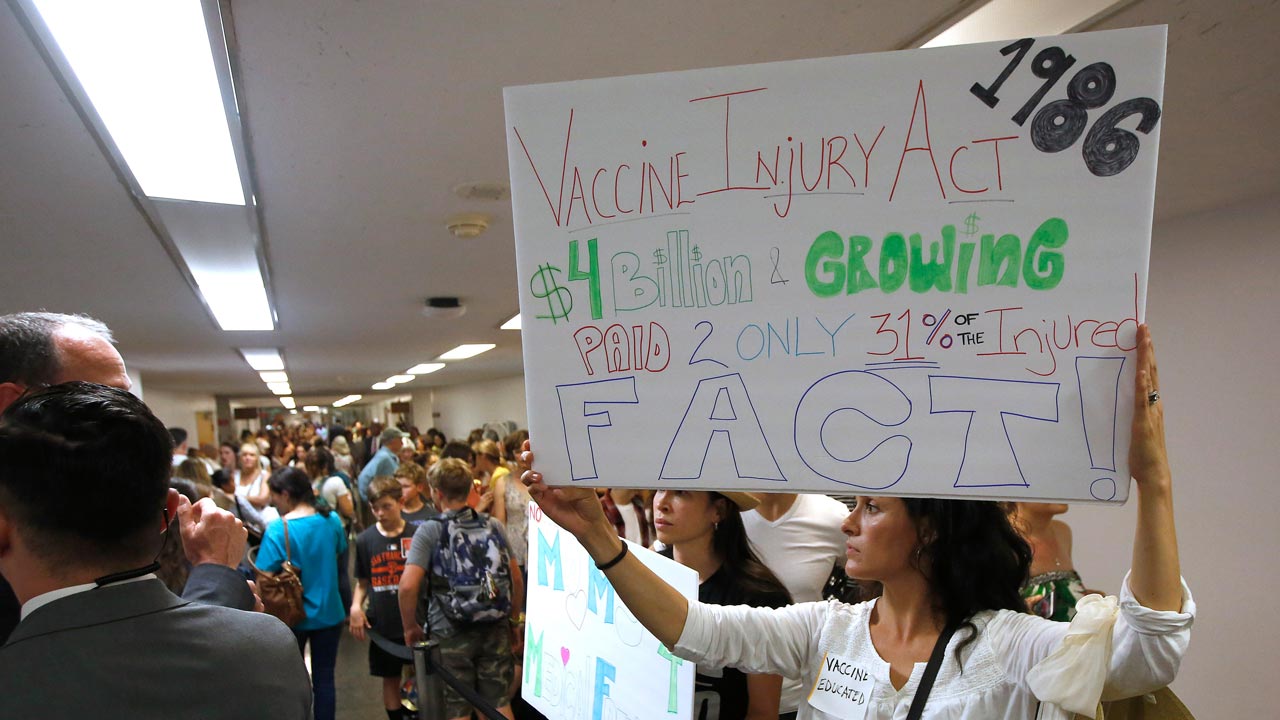 SACRAMENTO — California lawmakers advanced tougher rules for vaccinations late Wednesday after hearing hours of testimony from hundreds of opponents while the nation grapples with the highest number of measles cases in decades.
The Senate Health Committee approved the proposal to give state public health officials instead of local doctors the power to decide which children can skip their shots before attending school. The push coincides with this year’s national measles tally reaching the highest it’s been since 1994, according to an Associated Press count .

Lawmakers decided stronger oversight is needed to stem bogus exemptions granted in many cases by doctors who are paid to excuse students from vaccinations.
They acted despite more than three hours of often emotional opposition from parents and some children, and after spending another hour debating where to draw the line between individual rights and public safety.
“Our job here in Sacramento is to try to thread the needle,” concluded Democratic Sen. Bill Monning of Carmel. “Your right to your choice should not interfere with the health and safety of my child or grandchild.”

The measure passed to a fiscal committee on a party-line vote, with the panel’s two Republicans opposed.
Democratic Sen. Richard Pan of Sacramento said his legislation would give state health officials the tools they need to prevent outbreaks of vaccine-preventable diseases like measles, which in the first four months of the year have reached 28 confirmed cases in California.
“If we continue to let these fake medical exemptions increase, we’re going to have another larger outbreak, and we need to stop that now,” Pan said.
Pan’s bill is one of a number of efforts by state legislatures to address measles outbreaks. Washington state lawmakers voted Tuesday to remove parents’ ability to claim a personal or philosophical exemption from vaccinating their children for measles, although medical and religious exemptions will remain. Oregon is considering removing all non-medical exemptions, drawing the ire of hundreds of parents who came to the state capitol Tuesday to protest.

Objections to Loss of Parental Rights

Opponents of Pan’s bill, including members of parental rights and religious groups, doctors and alternative healthcare practitioners, said the measure strips away parents’ rights and isn’t necessary to prevent outbreaks.
“Now they’re going after us parents whose children have been injured by vaccines, and doctors as well,” said Christina Mecklenburg, who flew in from her Orange County home. “We can’t remain silent any more. Too many of our children are being injured.”
She said a vaccine last year left her now 2-year-old daughter, Hayden, cross-eyed with an ocular palsy that wouldn’t qualify for a medical exemption if Pan’s bill becomes law.
Opponents who jammed the hearing room and nearby hallways criticized the bill and Pan in unusually personal and emotional terms, with several accusing him of “committing crimes against humanity.” ”Shame on you,” said another, while a third called the bill “evil” and urged him to “please, save your soul.”

Dr. Sergio Flores, testifying in support of the bill on behalf of the California Medical Association, countered that “vaccines save lives.” Dozens of other medical professionals and students, many wearing white medical jackets, also lined up to support the bill.
Sacramento mother Alyssa Hernandez supported the bill, saying a high vaccination rate is necessary to protect her son, Noah, 2. He received a liver transplant and so cannot be vaccinated himself against many common but vaccination-preventable diseases. “Each of them could be life-threatening for him,” she said.
Supporters said pockets of unvaccinated students are helping to spread measles outbreaks in California and elsewhere. Pan said a few unethical doctors are helping parents avoid vaccinating their children by selling medical exemptions through word of mouth or online advertising.
California ended non-medical immunization exemptions in 2016, but Pan’s bill would follow West Virginia’s lead in having public health officials rather than doctors decide who qualifies for medical exemptions. Doctors would certify that they examined the patient and then send the state health department the reason they are recommending the exemption.

State and county health officials could also revoke exemptions if they are found to be fraudulent or contradict federal immunization standards. Federal guidelines say less than 1%of children should avoid vaccinations if they have a severe allergic reaction or impaired immunity such as from a liver problem, the HIV virus or chemotherapy.
Dr. Nicole Sharrock, a pediatrician, testified that she generally supports vaccinations but said the exemptions would be too narrow and exclude legitimate conditions. She called Pan’s legislation “too extreme” because it would let state health officials overrule doctors’ decisions.
Those officials have “never laid eyes on my child,” said Catharine Layton, who flew in from her Southern California home. “It totally comes between the patient and doctor relationship, which is sacred.”
Layton said her now 5-year-old son, Brennan, suffered a permanent brain injury after he was vaccinated at age 2. “He’s pretty much unable to speak, he’s in diapers, he functions at the level of an 18-month-old. And prior to the vaccine he was healthy,” she said.
Statewide immunization rates increased to more than 95% after California abolished the personal belief exemption in 2016, enough to keep most outbreaks from spreading.

Rate of Medical Exemptions Has Tripled

But health officials say the rate of medical exemptions has also tripled. It is still less than 1% of school children statewide, but advocates said more than half of students aren’t vaccinated in at least three California schools and 50 schools have exemption rates of at least 15%.
Dr. Edmond Sarraf, a pediatrician opposing the bill, said medical exemptions are up only because personal exemptions are no longer permitted.
The bill is backed by the California Medical Association and American Academy of Pediatrics. But more than 100 doctors sent a letter opposing what they called “an ill-advised bill” with a “one-size-fits-all” solution.
Pan’s office said some of the doctors are believed to be providing questionable exemptions, while the group noted that Pan has accepted tens of thousands of dollars in campaign contributions from the pharmaceutical industry.