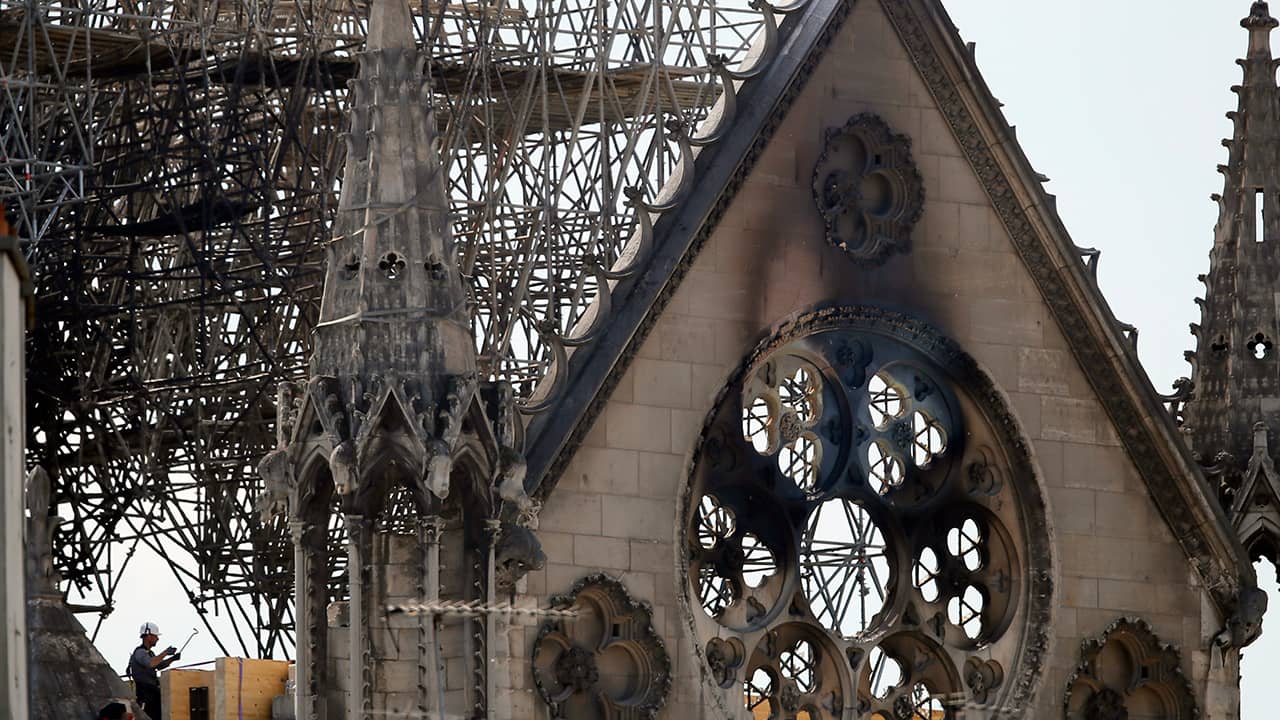 PARIS — Notre Dame Cathedral would have burned to the ground in a “chain-reaction collapse” had firefighters not moved as rapidly as they did to battle the blaze racing through the beloved landmark building, a French government official said Wednesday.

Cathedral Is Still Being Monitored Closely by Firefighters

Despite extensive damage, many of the cathedral’s treasures were saved, including Notre Dame’s famous rose windows, although they are not out of danger.
Paris Firefighters’ spokesman Lt.-Col. Gabriel Plus said that even though they are “in good condition … there is a risk for the gables that are no longer supported by the frame.”
Firefighters removed statues inside the gables, or support walls, above the rose windows to protect them, and took care not to spray water too hard on the delicate stained glass, Plus said.
Scaffolding erected for a renovation of the spire and roof that was already underway must be properly removed because of its weight and because it is now “crucially deformed,” he added.
The cathedral is still being monitored closely by firefighters and experts to determine how much damage the structure suffered and what needs to be dismantled to avoid collapse.
“The experts are scrutinizing the whole of the cathedral, part by part, to identify what is weakened, what will need to be dismantled or consolidated,” Plus said.
Nearly $1 billion has pledged for the restoration, while a vow by French President Emmanuel Macron to finish it in five years has been challenged as being wildly off track.
He said the renovations would be completed in time for the 2024 Olympics in Paris.

“We will rebuild the cathedral to be even more beautiful, and I want it to be finished within five years,” Macron said. Criticism Already Has Surfaced in France

Notre Dame’s rector said he would close the cathedral for up to “five to six years,” acknowledging that “a segment” of the structure may be gravely weakened.
Pledges of nearly $1 billion have been made by ordinary worshippers and wealthy magnates, including those who own L’Oreal, Chanel and Dior. Presidential cultural heritage envoy Stephane Bern told broadcaster France-Info that 880 million euros ($995 million) has been raised since the fire.

Island Is Considered the Heart of Paris

The Paris prosecutor’s office said investigators have still not been able to look inside the cathedral, because it remains dangerous.
About 30 people have already been questioned in the investigation. Among them are workers at the five construction companies who were involved in renovating the church spire and roof.
Neighborhood merchants who depend on tourism to Notre Dame expressed worry about their future. Since the fire, the island that houses the cathedral has been closed to the public and its residents evacuated.
“No one is talking about us,” said Patrick Lejeune, president of an association that represents about 150 employees.
Bustling streets are now “totally closed. I don’t have access to my office,” he said.
The island is considered the heart of Paris, with all distances in France measured from the esplanade in front of Notre Dame.
Later Wednesday evening, bells will toll at cathedrals around France in honor of Notre Dame.