Beyond the Tampon Tax: How Far Will California Go to End 'Menstrual Inequity'? 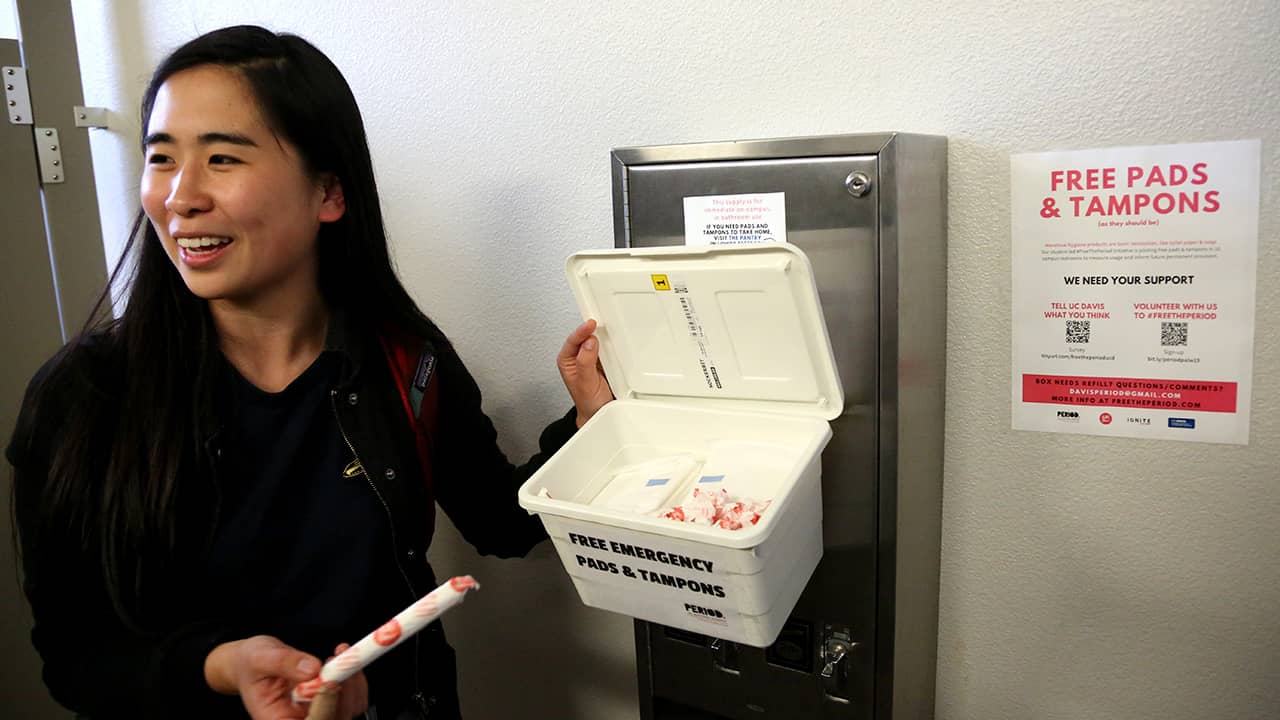 Annie Wang remembers the panic she felt being a freshman in a 500-person chemistry class at UC Davis when her period arrived and she didn’t have a tampon or pad. There was nowhere nearby to go, and leaving to find something meant missing the class. Bill Cleared the Legislature in 2016, but Gov. Jerry Brown Vetoed It

But the most closely watched effort is underway in the state Capitol, where lawmakers expect to advance a bill to end that sales tax.
A few years back, there were a lot of eye rolls and snickers when Democratic Assemblywoman Cristina Garcia of Bell Gardens carried such a bill. Embracing the novelty of it all, she dubbed herself “Tampon Queen” and propped a huge pad and tampon in her office window.
“It allowed a conversation to happen that was more than a tax—it’s about menstrual equity and our biology,” she said.
Her bill cleared the Legislature in 2016, but Gov. Jerry Brown vetoed it, saying it should have been addressed within the state budget and that “tax breaks are the same thing as new spending.” That prompted a tweet retort from Garcia:

@JerryBrownGov please mansplain why it’s ok to balance the budget on women’s backs? He vetoed #AB1561, the unfair #tampontax continues.

With a new governor in place, she’s at it again. This time her colleagues have been so eager to back her Assembly Bill 31 that it has more co-authors than any other this session. Last time, she said, “I had to beg them to join me.” This bill is expected to garner Gov. Gavin Newsom’s support.
But Jerry Brown isn’t alone. Editorials in newspapers such as the Los Angeles Times have contended that it’s unwise to carve out exemptions from state sales tax in such a random fashion — especially when the state taxes items equally as essential, such as toilet paper, diapers, and toothpaste.
The California Tax Reform Association criticized the bill for drawing a line new to the state sales tax: “gender necessity. … The problem with drawing such a line is that many possibilities for exemption follow the logic of gender specificity. Clothing, cosmetics, over-the-counter and pharmaceuticals are all examples of products that can be construed as both gender-based and necessary,” the association noted.
And the California State Association of Counties also opposes the idea. “After the past thirty years of changes to sales and use tax collections, counties have come to depend on those revenues to balance their budgets and specifically offset the costs of providing realigned services, including criminal justice, health, mental health, and social services,” the association wrote.

The State Considers Them Not Necessities, but Luxuries

“I respect the need for California to be fiscally sound,” Garcia countered, “but the state budget should not be balanced by a tax of a person’s uterus. The same goes for local governments; our tax codes should be gender neutral.”
A legislative analysis said the bill, if enacted, would cost the state of California $9 million in lost revenue in the first year and $19 million in the second year.


“I respect the need for California to be fiscally sound, but the state budget should not be balanced by a tax of a person’s uterus. The same goes for local governments; our tax codes should be gender neutral.” — Assemblywoman Cristina Garcia
To be clear, there is not an extra tax on tampons and pads. But unlike food and medicine, they are not exempt from California sales tax because the state considers them not necessities, but luxuries.
Thus far 10 other states including New York, Florida, Connecticut and Nevada, and D.C. have banned sales taxes on period products. Across the globe, Canada, India, and Australia have long since eliminated the tax and a battle is underway to end it in the United Kingdom.
“Today, the most progressive state in the union is behind the curve in providing a gender-neutral tax code that doesn’t profit off of a woman’s basic biological functions,” Garcia said.
Menstruation is about equity and engagement as much as it is about health, said Jennifer Weiss-Wolf, vice president of The Brennan Center for Justice at New York University who co-founded Period Equity, an organization that is behind the tampon tax campaigns nationwide. It produced a glitzy ad that has model and actress Amber Rose fondling a bezel-set diamond pendant from which a bejeweled locket contains a tampon, asking “Where else would you keep something 36 states tax as a luxury?” The ad’s kicker: “Tell the government where to stick this tax.”
“The taxes and the challenges of access are unfair and discriminatory toward women,” said Weiss-Wolf.  “It’s an enormous distraction and at worst a hindrance to being fully present.”

Costs to Taxpayers Could Escalate

“The tampon tax is not the issue that will solve period poverty but it sends a message that menstrual hygiene is necessary and it’s a right,” said Nadya Okamato, who at age 16 founded PERIOD, a nonprofit that donates products and works on menstrual policy and education with 350 chapters across the world. “It’s something that happens to the majority of the global population for an average of 40 years of life and it makes human life possible. It’s not something that should be treated with shame and stigma, it should be normalized.”
The group, celebrities, and a period products company recently co-signed a letter to U.S. Education Secretary Betsy DeVos asking for free products at all schools.

Mormons Repeal Ban on Baptisms for Children of Gay Parents

Walters: A Crackdown on Misuse of Taxpayer Money?