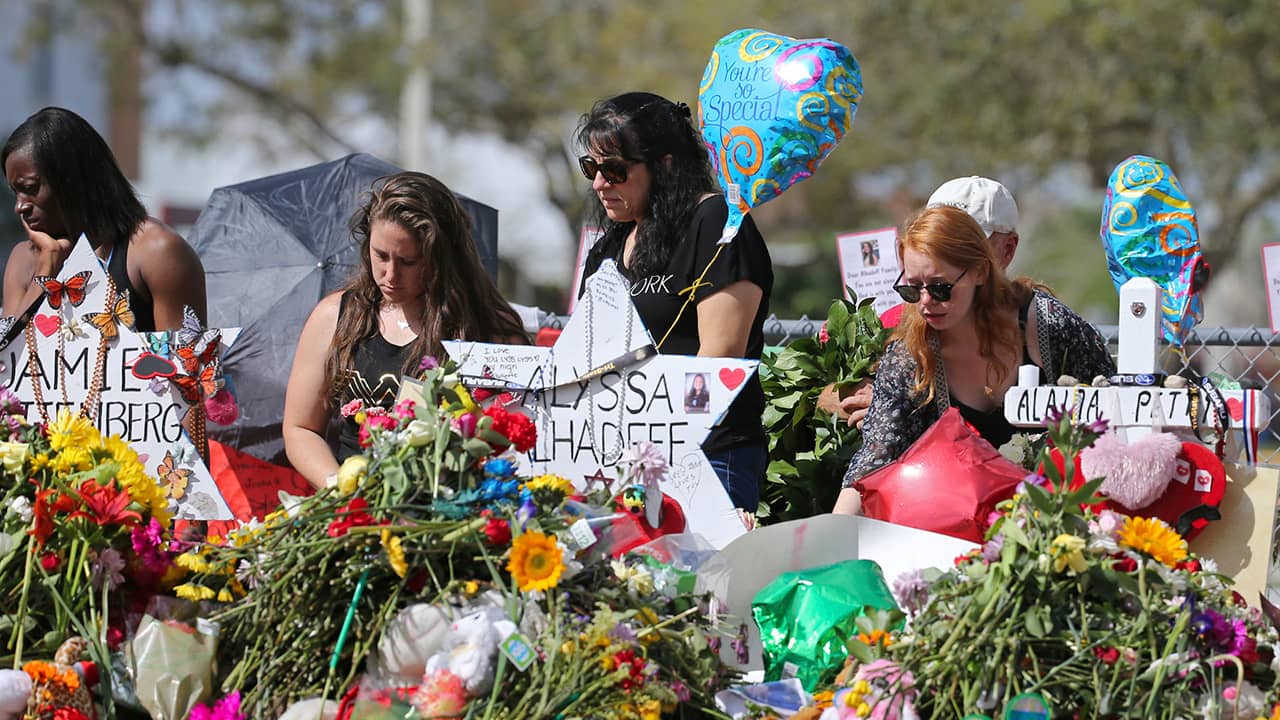 FORT LAUDERDALE, Fla. — Tragedies like the Marjory Stoneman Douglas High and Sandy Hook Elementary school massacres eventually fade from view, blunted by other mass shootings and the passage of time. But for the survivors, the pain can never end.

“Our hearts are shattered, and our heads are struggling to comprehend. Tragically, his death speaks to how insidious and formidable a challenge brain health can be and how critical it is for all of us to seek help for ourselves, our loved ones and anyone who we suspect may be in need.” — The Avielle Foundation statement

The father of a Sandy Hook victim killed himself Monday, just days after two Stoneman Douglas students also took their lives. The Florida deaths have officials in Parkland and nearby Coral Springs renewing their communities’ focus on the suicide prevention and mental health resources that remain available 13 months after a gunman killed 17 people at the high school.

In Newtown, Connecticut, where 20 first-graders died along with six staff members six years ago, the body of 49-year-old Jeremy Richman was found outside his office Monday morning.

Richman’s daughter Avielle was fatally shot at Sandy Hook. He had visited Florida last week and met with the parents of Stoneman Douglas victims, said Lori Alhadeff, whose 14-year-old daughter Alyssa died there.

Richman and his wife oversaw The Avielle Foundation, a group they started dedicated to preventing violence by better understanding brain health.

“Our hearts are shattered, and our heads are struggling to comprehend,” the foundation said in a statement. “Tragically, his death speaks to how insidious and formidable a challenge brain health can be and how critical it is for all of us to seek help for ourselves, our loved ones and anyone who we suspect may be in need.”

Survivors Are More Prone to Suicide

Multiple suicides among mass shooting survivors can be alarming, but mental health experts said the Florida deaths are not surprising. They come amid a rising nationwide trend: More than 47,000 U.S. suicides occurred in 2017, at the highest rate in at least half a century — 14 per 100,000. Suicide is the second-leading cause of death among U.S. teenagers.

“It’s not a foregone conclusion that this will happen to everyone who’s been exposed to this and the majority of people who are suicidal don’t go on to die. They go on to recover and live.” — Psychologist April Foreman

“One of the big risk factors for suicide is exposure to violence,” said Dr. Louis Kraus, chief of child and adolescent psychiatry at Rush University Medical Center in Chicago.

Even if they weren’t hit by bullets or didn’t see shots fired, “anyone who was at that school is at risk,” Kraus said, and should be screened.

“The scars simply don’t go away with a fresh coat of paint,” he said.

Psychologist April Foreman, a board member at the American Association of Suicidology, said survivors are more prone to suicide and thus must be vigilant about mental health check-ups just as if they had a family history of breast cancer or heart disease.

With help, people can overcome their suicidal impulses, she said.

“It’s not a foregone conclusion that this will happen to everyone who’s been exposed to this and the majority of people who are suicidal don’t go on to die. They go on to recover and live,” she said.

Sydney had been diagnosed with post-traumatic stress disorder and struggled to attend college because she feared being in a classroom, but never asked for help, her mother said.

Coral Springs police officer Tyler Reik confirmed Monday that a Stoneman Douglas sophomore apparently killed himself Saturday, but said an official determination had not been made pending an autopsy. The boy’s name was not immediately released.

The biggest push will be to alert parents to talk to their children about whether they are having suicidal thoughts and outline the danger signs for them, such as personality changes or a preoccupation with death, she said.

The groups also want students to look out for each other, and noted that the community counseling and resource centers that opened after the attack still remain available.

The task has been made more difficult as Stoneman Douglas students are on spring break. Students at Seminole Middle School in Plantation, Fla., participate in a moment of silence Thursday, Feb. 14, 2019, for the 14 students and three staff members killed one year ago at nearby Marjory Stoneman Douglas High School. They are sitting in front of a new mural depicting musicians from throughout the world that was dedicated to the shooting victims. (AP Photo/Terry Spencer)

Survivor Tried to Kill Herself Four Times Before She Entered Therapy

Hunschofsky said that while there is concern the two suicides could lead to more, it is more dangerous not to discuss what happened.

A 16-year-old Stoneman Douglas sophomore who was in a classroom where three students died on Feb. 14, 2018, told The Associated Press on Monday that she tried to kill herself four times before she entered therapy.

“We cannot be afraid of talking — the only way we are going to identify people who need help is to talk about it,” she said.

A 16-year-old Stoneman Douglas sophomore who was in a classroom where three students died on Feb. 14, 2018, told The Associated Press on Monday that she tried to kill herself four times before she entered therapy.

At first, she was ashamed, she said, fearing that accepting counseling would mean she “couldn’t’ handle my problems” and “I was broken.” But her attitude changed with the support of therapists, family and friends, said the girl, who the AP is not naming because of her age.

The girl said she fears not every Stoneman Douglas student who needs counseling is getting it and noted that some teachers seem uncomfortable talking about suicide and simply want to move on.

Neil Heslin, whose son, Jesse Lewis, was killed at Sandy Hook, said the families’ grief has been compounded by such conspiracy theories.

“Every day you get up, you expect to get punched in the chin,” Heslin said. “I give Jeremy credit for what he accomplished with his work and his amazing strength that grew through the years.”

On Monday, residents streamed into the Resiliency Center of Newtown, which was set up shortly after the shooting as a place for therapy and for people to gather to talk. Richman worked with the center in providing “brain health” first aid for children and others.

His friend, Stephanie Cinque, the center’s executive director, said people are angry, sad and shocked by his death.

“There’s mixed feelings throughout town,” she said. “Grief is complicated. It’s very sad for the family, the children, the entire community. So today we’re letting people know it’s OK to have those feelings.”

Columbine High massacre survivor Heather Martin was not physically injured in the 1999 shooting that left 13 dead, but said she took years to emotionally overcome the attack. She helped form the Rebels Project, named after Columbine’s mascot, to assist mass trauma survivors.

“Resilience is connecting with other people and gaining strength from other people,” Martin said. “You don’t always have to be the strongest person.”

Fresno Honors Seven as Women of the Year