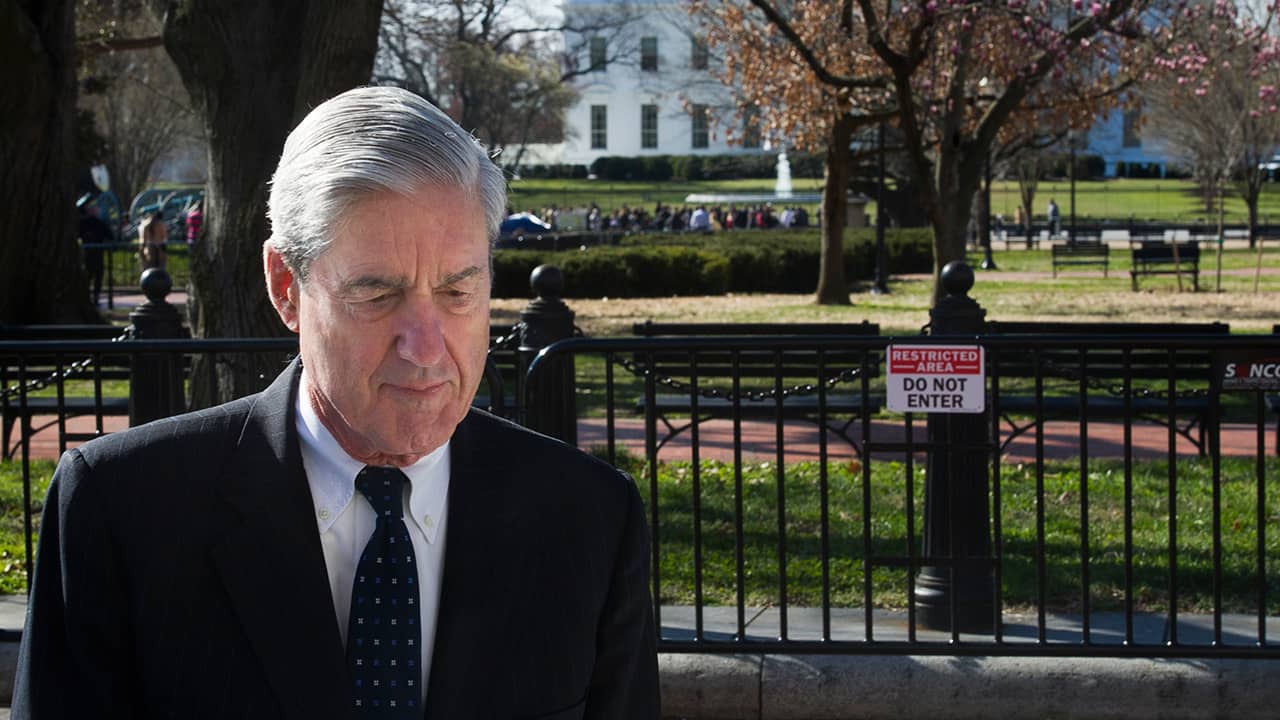 That brought a hearty claim of vindication from Trump but set the stage for new rounds of political and legal fighting.

The battle began Monday as White House aides and allies blanketed television news broadcasts to trumpet the findings and claim that Trump has been the victim in a probe that never should have started.

White House spokeswoman Sarah Sanders said Trump will let Attorney General William Barr decide whether the special counsel’s Russia report should be publicly released, though she adds that “he’s more than happy for any of this stuff to come out.”

Democrats pointed out that Mueller found evidence for and against obstruction and demanded to see his full report. They insisted that even the summary by the president’s attorney general hardly put him in the clear.

Mueller’s conclusions, summarized by Barr in a four page letter to Congress, represented a victory for Trump on a key question that has hung over his presidency from the start — whether his campaign worked with Russia to defeat Democrat Hillary Clinton.

Circumspect on Presidential Obstruction of Justice

That was further good news for the president on top of the Justice Department’s earlier announcement that Mueller had wrapped his investigation without new indictments. That could deflate the hopes of Democrats in Congress and on the 2020 campaign trail that incriminating findings from Mueller would hobble the president’s agenda and re-election bid.

According to Barr’s summary, Mueller set out “evidence on both sides of the question” and stated that “while this report does not conclude the president committed a crime, it also does not exonerate him.”

But while Mueller was categorical in ruling out criminal collusion, he was more circumspect on presidential obstruction of justice. Despite Trump’s claim of total exoneration, Mueller did not draw a conclusion one way or the other on whether he sought to stifle the Russia investigation through his actions including the firing of former FBI director James Comey.

According to Barr’s summary, Mueller set out “evidence on both sides of the question” and stated that “while this report does not conclude the president committed a crime, it also does not exonerate him.”

Barr, who was nominated by Trump in December, and Deputy Attorney General Rod Rosenstein, who appointed Mueller in May 2017 and oversaw much of his work, went further in Trump’s favor.

The attorney general said he and Rosenstein had determined that Mueller’s evidence was insufficient to prove in court that Trump had committed obstruction of justice to hamper the probe. Barr has previously voiced a broad view of presidential powers, and in an unsolicited memo last June he cast doubt on whether the president could have obstructed justice through acts — like firing his FBI director — that he was legally empowered to take.

Barr said their decision was based on the evidence uncovered by Mueller and not affected by Justice Department legal opinions that say a sitting president cannot be indicted.

The Question of Colluding With Russia

Mueller’s team examined a series of actions by the president in the last two years to determine if he intended obstruction. Those include his firing of Comey one week before Mueller’s appointment, his public and private haranguing of then-Attorney General Jeff Sessions for recusing himself from the Russia investigation because of his work on the campaign, his request of Comey to end an investigation into Michael Flynn, the White House’s first national security adviser, and his drafting of an incomplete explanation about his oldest son’s meeting with a Russian lawyer during the campaign.

Mueller’s findings absolve Trump on the question of colluding with Russia but don’t entirely remove the legal threats the president and associates are facing. Federal prosecutors in New York, for instance, are investigating hush-money payments made to two women during the campaign who say they had sex with the president. Trump’s former personal lawyer, Michael Cohen, implicated Trump in campaign finance violations when he pleaded guilty last year.

The special counsel’s investigation did not come up empty-handed. It ensnared nearly three dozen people, senior Trump campaign operatives among them. The probe illuminated Russia’s assault on the American political system, painted the Trump campaign as eager to exploit the release of hacked Democratic emails to hurt Hillary Clinton and exposed lies by Trump aides aimed at covering up their Russia-related contacts.

Thirty-four people, including six Trump aides and advisers, were charged in the investigation. Twenty-five are Russians accused of election interference either through hacking into Democratic accounts or orchestrating a social media campaign to spread disinformation on the internet. Offers From Russian-Affiliated Individuals to Assist the Trump Campaign

Sunday’s summary — and its suggestion that Mueller may have found evidence in support of obstruction — sets up a fight between Barr and Democrats, who called for the special counsel’s full report to be released and vowed to press on with their own investigations.

“Given Mr. Barr’s public record of bias against the special counsel’s inquiry, he is not a neutral observer and is not in a position to make objective determinations about the report. [Trump’s own claim of complete exoneration] directly contradicts the words of Mr. Mueller and is not to be taken with any degree of credibility.” — House Speaker Nancy Pelosi and Senate Minority Leader Chuck Schumer

“Given Mr. Barr’s public record of bias against the special counsel’s inquiry, he is not a neutral observer and is not in a position to make objective determinations about the report,” they said. Trump’s own claim of complete exoneration “directly contradicts the words of Mr. Mueller and is not to be taken with any degree of credibility,” they added.

Trump was at his Florida estate when lawmakers received the report. Barr’s chief of staff called Emmet Flood, the lead White House lawyer on the investigation, to brief him on the findings shortly before he sent it to Congress. Mueller submitted his report to Barr instead of directly to Congress and the public because, unlike independent counsels such as Ken Starr in the case of President Bill Clinton, his investigation operated under the close supervision of the Justice Department.

Barr did not speak with the president, Mueller was not consulted on the letter, and the White House does not have Mueller’s report, according to a Justice Department official.

That’s a likely reference not only to a June 2016 Trump Tower meeting at which Donald Trump. Jr. expected to receive damaging information on Clinton from a Kremlin-connected lawyer, as well as a conversation in London months earlier at which Trump campaign aide George Papadopoulos was told Russia had “dirt” on Clinton in the form of thousands of stolen emails.

Rep. Jerrold Nadler of New York, the House Judiciary Committee chairman, said Congress needs to hear from Barr about his decision and see “all the underlying evidence.” He said on Twitter, “DOJ owes the public more than just a brief synopsis and decision not to go any further in their work.”

Barr said that Mueller “thoroughly” investigated the question of whether the Trump campaign coordinated with Russia’s election interference, issuing more than 2,800 subpoenas, obtaining nearly 500 search warrants and interviewing 500 witnesses. Trump answered some questions in writing, but refused to be interviewed in person by the Mueller team.

Barr said Mueller also catalogued the president’s actions including “many” that took place in “public view,” a possible nod to Trump’s public attacks on investigators and witnesses.

In the letter, Barr said he concluded that none of Trump’s actions constituted a federal crime prosecutors could prove in court.