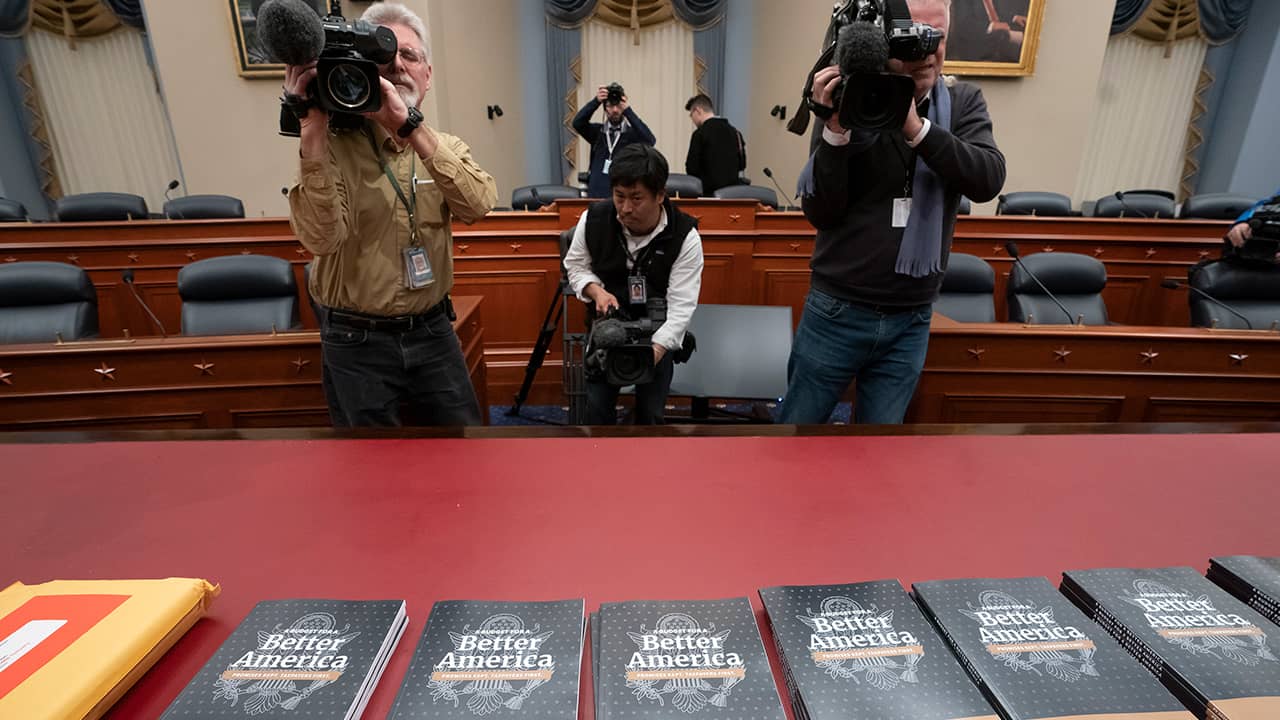 Trump contended the nation is experiencing “an economic miracle.” He said in a letter to Congress accompanying the plan that the country’s next step must be “turbocharging the industries of the future and establishing a new standard of living for the 21st century.”

The deficit is projected to hit $1.1 trillion in the 2020 fiscal year, the highest in a decade. The administration is counting on robust growth, including from the Republican tax cuts — which Trump wants to make permanent — to push down the red ink. Some economists, though, say the bump from the tax cuts is waning, and they project slower growth in coming years. The national debt is $22 trillion.

Even with his own projections, Trump’s budget would not come into balance for a decade and a half, rather than the traditional hope of balancing in 10.

For a deep dive into how the president proposes to fund education, click on this link at Education Week.

Trump Touts the US ‘Economic Miracle’

Still, Trump contended the nation is experiencing “an economic miracle.” He said in a letter to Congress accompanying the plan that the country’s next step must be “turbocharging the industries of the future and establishing a new standard of living for the 21st century.”

Presidential budgets tend to be seen as aspirational blueprints, rarely becoming enacted policy, and Trump’s proposal for the new fiscal year, which begins Oct. 1, sets up a showdown with Congress over priorities, including his push for $8.6 billion to build the U.S-Mexico border wall.

Despite the large projected deficits, Vought said the administration has “prioritized reining in reckless Washington spending” and shows “we can return to fiscal sanity.”

Piling on of Debt by Trump With No Correction in Sight

Some fiscal watchdogs, though, panned the effort as more piling on of debt by Trump with no course correction in sight.

Maya MacGuineas, president of the Committee for a Responsible Federal Budget, said Trump “relies on far too many accounting gimmicks and fantasy assumptions and puts forward far too few actual solutions.” She warned the debt load will lead to slower income growth and stalled opportunities for Americans.

Related Story: Can You Believe It? National Debt Now $22 Trillion.

Perhaps most notably among spending proposals, Trump is reviving his border wall fight. Fresh off the longest government shutdown in history, his 2020 plan shows he is eager to confront Congress again over the wall.

Trump’s budget proposes increasing defense spending to $750 billion — and building the new Space Force as a military branch — while reducing nondefense accounts by 5 percent, with cuts recommended to economic safety-net programs used by many Americans. The $2.7 trillion in proposed spending cuts over the decade is higher than any administration in history, they say.

The budget imposes work requirements for those receiving food stamps and other government aid as part of the cutbacks. The Department of Housing and Urban Development faces a 16 percent cut and for Education, a 12 percent reduction.

Trump’s budget would re-open two health care battles he lost in his first year in office: repealing “Obamacare” and limiting future federal spending on Medicaid for low-income people. Under the budget, both programs would be turned over to the states starting in 2021.

Trump Is Signaling a Fight Ahead

The plan sticks to budget caps that both parties have routinely broken in recent years. To stay within the caps, the budget shifts a portion of the defense spending, some $165 billion, to an overseas contingency fund, which some fiscal hawks will view as an accounting gimmick.

The president has resisted big, bipartisan budget deals that break the caps — threatening to veto one last year — but Congress will need to find agreement on spending levels to avoid another federal shutdown in the fall.

The top Democrat on the Appropriation Committee, Sen. Patrick Leahy of Vermont, said the budget is “not a serious proposal.”

By refusing to raise the budget caps, Trump is signaling a fight ahead. The president has resisted big, bipartisan budget deals that break the caps — threatening to veto one last year — but Congress will need to find agreement on spending levels to avoid another federal shutdown in the fall.

The Democratic chairman of the House Budget Committee, Rep. John Yarmuth of Kentucky, called the proposed cuts to essential services “dangerous.” He said Trump added nearly $2 trillion to deficits with the GOP’s “tax cuts for the wealthy and large corporations, and now it appears his budget asks the American people to pay the price,” the Democrat said.

While pushing down spending in some areas, including the Environmental Protection Agency, the proposal will seek to increase funding in others to align with the president’s priorities, according to one official.

The administration would boost Veterans Affairs funding by $6.5 billion, or 7.5 percent, and says reducing veteran suicides would be a top priority.

The budget provides $291 million to “defeat the HIV/AIDS epidemic” with hopes of eliminating 90 percent of new infections within 10 years. It would also increase resources to fight the opioid epidemic with money for prevention, treatment, research and recovery, the administration said.

It provides $500 million in new spending over the decade on child cancer research.

The proposal will also include $1 billion for a child care fund that would seek to improve access to care for underserved populations, a White House official confirmed. The one-time allocation is championed by the president’s daughter Ivanka Trump, who has focused on economic advancement for women in her role as a White House adviser.

It also provides $200 billion toward infrastructure, much lower than the $1 trillion plan Trump once envisioned. The plan says that money would be leveraged with private dollars, but Congress has largely panned that approach.

White House economic adviser Larry Kudlow said Trump’s budget “points a steady glide path” toward lower spending and borrowing as a share of the nation’s economy. He also told “Fox News Sunday” there was no reason to “obsess” about deficits, and expressed confidence that economic growth would top 3 percent in 2019 and beyond. Others have predicted lower growth.

The border wall remains a signature issue for the president and is poised to stay at the forefront of his agenda, even though Congress has resisted giving him more money for it.

Increasing the Manpower of ICE Officers

“Congress refused to fund his wall and he was forced to admit defeat and reopen the government. The same thing will repeat itself if he tries this again,” said House Speaker Nancy Pelosi, D-Calif., and Senate Democratic leader Chuck Schumer of New York. They said the money “would be better spent on rebuilding America.”

In seeking $8.6 billion for more than 300 miles of new border wall, the budget request would more than double the $8.1 billion already potentially available to the president for the wall after he declared a national emergency at the border last month in order to circumvent Congress — although there’s no guarantee he’ll be able to use that money if he faces a legal challenge, as is expected.

“Congress refused to fund his wall and he was forced to admit defeat and reopen the government. The same thing will repeat itself if he tries this again.” — Senate Democratic leader Chuck Schumer

Along with border wall money, the proposed budget will also increase funding to increase the “manpower” of Immigration and Customs Enforcement officers and Customs and Border Patrol at a time when many Democrats are calling for cuts — or even the elimination — of those areas. The budget also proposes policy changes to end sanctuary cities, the administration said.

The budget arrives as the Senate readies to vote this week to terminate Trump’s national emergency declaration. The Democratic-led House already did so, and a handful of Republican senators, uneasy over what they see as an overreach of executive power, are expected to join Senate Democrats in following suit. Congress appears to have enough votes to reject Trump’s declaration but not enough to overturn a veto. The standoff over the wall led to a 35-day partial government shutdown, the longest in U.S. history.

The wall with Mexico played a big part in Trump’s campaign for the White House, and it’s expected to again be featured in his 2020 re-election effort. He used to say Mexico would pay for it, but Mexico has refused to do so.