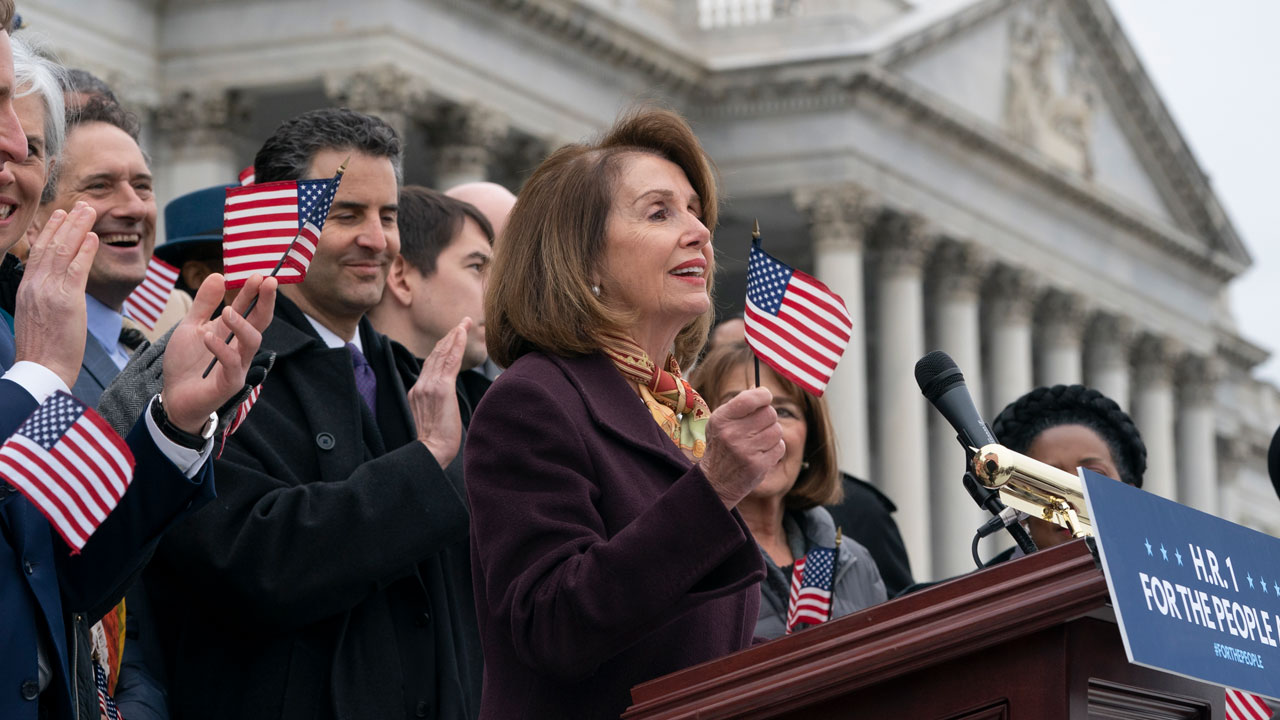 WASHINGTON — Newly empowered House Democrats approved a centerpiece of their agenda Friday, a sweeping plan to reduce the role of big money in politics, ensure fair elections and strengthen ethics standards. But the leader of Republican-run Senate has pledged it will not come up for a vote and the White House issued a veto threat.

The measure would make it easier for people to register and vote, tighten election security and require presidential candidates to disclose their tax returns.

Election Day would become a holiday for federal workers and a public financing system for congressional campaigns would be established. The bill would bar voter roll purges such as those seen in Georgia, Ohio and elsewhere, and restore voting rights for ex-prisoners.

The H.R. 1 legislation was approved 234-193 on a straight party-line vote, with all Democrats voting “yes” and all Republicans voting “no.”

It’s time to change the influences that can corrupt the lawmaking process in D.C.. HR1 makes it easier for American’s to vote and makes our democracy stronger by making our institutions more inclusive, ethical, transparent and accountable.#ForThePeople#HR1

Republicans called the bill a Democratic power grab that amounts to a federal takeover of elections and could cost billions of dollars. Senate Majority Leader Mitch McConnell, R-Ky., said the proposal was dead on arrival in that chamber.

The White House said in a statement that the Democrats’ plan would “micromanage” elections that now are run largely by states and would establish “costly and unnecessary programs to finance political campaigns” and force taxpayers to fund federal candidates they may not support.

But House Speaker Nancy Pelosi, D-Calif., said the bill “restores the people’s faith that government works for the public interest — the people’s interest — not the special interests.”

Trying to turn Republicans’ words against them, Pelosi said, “Yes it is a power grab — a power grab on behalf of the people.”

House GOP leader Kevin McCarthy of California said the legislation would undermine the integrity of elections by allowing convicted felons to vote, and would apply a one-size-fits-all standard to elections now run by states and local governments.

The bill stands in contrast to legislation Republicans promoted when they controlled the chamber in the last Congress, McCarthy said, citing a massive tax cut they pushed through that was intended to jump-start the economy. “Our bill returned taxpayer money to the people. Theirs takes tax money and gives it to campaigns.”

Democrats have criticized the GOP tax cut as a boon to the rich and to corporations. The nonpartisan Tax Policy Center said most middle-income taxpayers should see a reduction this year although the tax law benefits higher earners more.

Democrats on Friday said McCarthy was mischaracterizing the election-overhaul bill.

Rep. Zoe Lofgren, D-Calif., said it “grabs power away from the elites and the power brokers and gives it to the people.”

She and other Democrats disputed the claim that taxpayers will pay for campaigns, noting that money for political campaigns would come from a surcharge on federal settlements made with banks and corporations that run afoul of the law.

This bill would allow “everyday Americans to become power brokers” with small contributions of $50 or $75 that would be matched at a 6-to-1 rate by the government, said Rep. John Sarbanes, D-Md., the bill’s main author.

Still, Republicans warned that the price tag could run into the billions.

“Regardless of what they disguise it as, make no mistake that the position of Democrats is to fund politicians’ campaigns using taxpayer funds,” said Rep. Rodney Davis, R-Ill.

The bill also “weakens safeguards to voting and registration practices that open the door to fraud” and attempts to limit free speech, Davis said, citing disclosure requirements for political donations.

The bill would create automatic national voter registration while expanding access to early and online registration. It would prohibits voter roll purges such as those seen in Georgia, Ohio and elsewhere, and increase federal support for state voter systems, including paper ballots to prevent fraud.

Maryland Rep. Steny Hoyer, the second-ranking leader, said voting-roll purges and other voter suppression have prevented thousands of people from voting in Georgia, North Carolina and other states.

“We need to be facilitating people voting — protecting voters’ rights and making it easier to register and vote,” he said in an interview. “It seems to me that’s an American value.”

Rep. Max Rose, D-N.Y., said he and other first-term lawmakers ran on an anti-corruption platform that helped deliver a Democratic majority last fall. “We are changing the way politics is run in this country,” he said.