LAS VEGAS — Entrepreneur Elon Musk’s dream of an express tunnel transit system could finally become a reality in Las Vegas after major setbacks in other cities.

Las Vegas’ tourism agency announced Wednesday it is recommending that an enterprise backed by the divisive billionaire receive a contract to build and operate an underground tunnel system through which autonomous electric vehicles would whisk people around a mega convention center, and in the future, possibly the city’s famous casino-filled corridor.

If approved, the system of just over a mile long would debut by January 2021 at the facility, which hosts more than 1 million people every year. The Musk-owned The Boring Company would build the project costing from $35 million to $55 million.

It’s different from his beleaguered efforts to build underground tunnel systems in other cities because Musk will be paid for it if the contract is approved. Projects in Los Angeles and Chicago have drawn opposition and skepticism from residents and officials about whether they will actually open.

Musk has faced recent blowback because of his behavior and tweeting habits. He has had dust-ups with stock market regulators and agreed last year to step down as chairman of the board of Tesla, his electric car company.

But Las Vegas tourism officials are ready to get on board with a Musk project.

System Will Likely Have Three or Four Stations

“It’s really innovative. I think it will be an attraction in and of itself, frankly,” Steve Hill, president and CEO of the Las Vegas Convention and Visitors Authority, told The Associated Press.

“It’s really innovative. I think it will be an attraction in and of itself, frankly.” — Steve Hill, president and CEO of the Las Vegas Convention and Visitors Authority

Details of the project have not been finalized. But Hill said the system will probably have three or four stations, each situated at entrances to the convention center’s halls. People would be carried to the hall of their choice in electric vehicles moving through parallel tunnels, each running in one direction.

The fleet could include Tesla’s Model X and Model 3 and a vehicle with capacity for about 16 people, Hill said. All vehicles would be fully autonomous, meaning they won’t have backup human drivers.

The Las Vegas Convention Center, which attracts worldwide gatherings including the premier Consumer Electronics Show, is undergoing an expansion. When finished, convention attendees could log about two miles walking from one end to the other. The distance led officials to look for a transportation solution.

The service within the convention center is expected to be free for people attending events.

The convention center is operated by the authority, which is funded by a county room tax and is responsible for promoting the destination around the world. The tourism agency is governed by a board of directors.

The authority is expected to present to the board the recommendation to select Musk’s company March 12. If approved, Hill said the agency hopes to return to the board with a full design and proposed contract by June. 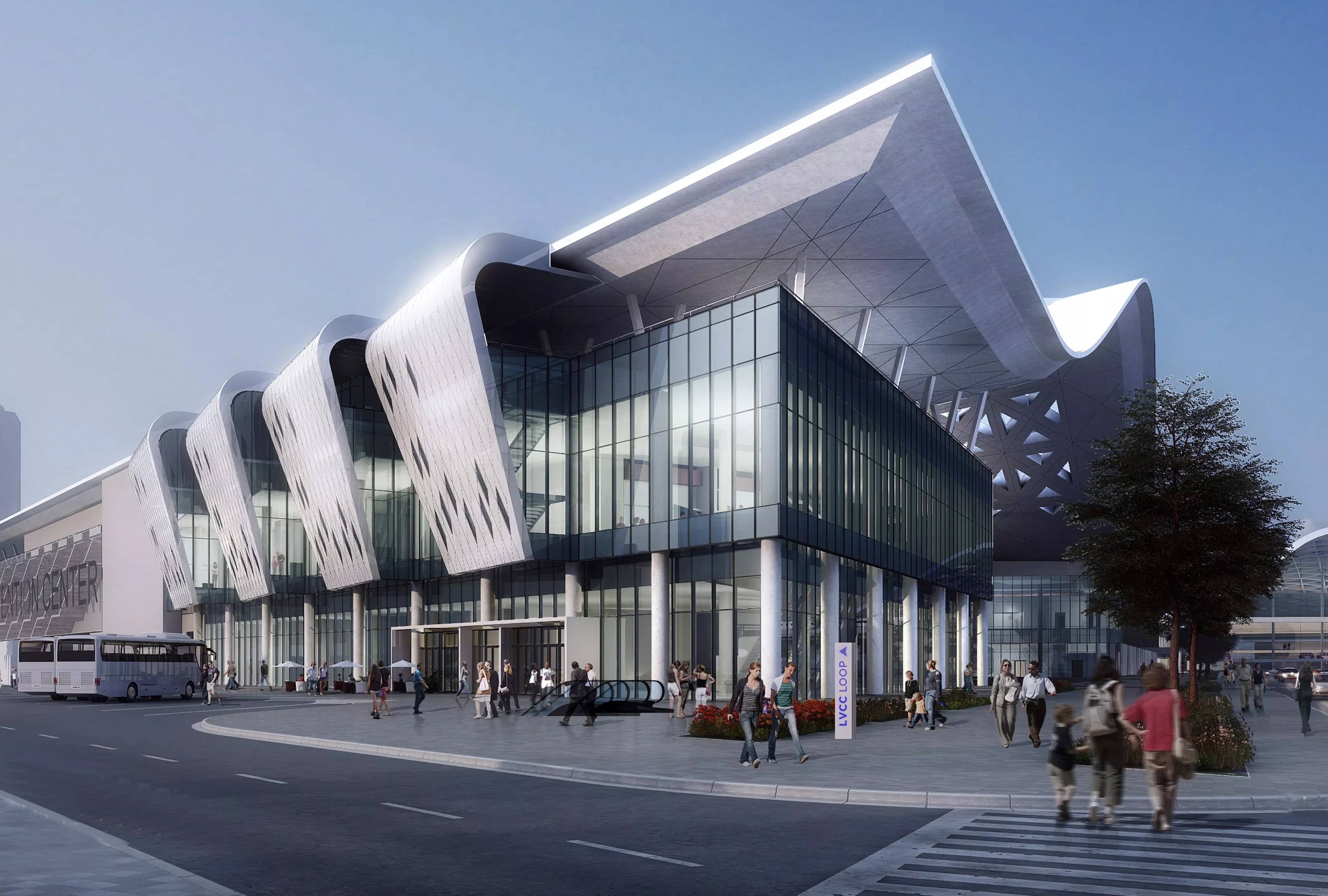 This undated conceptual drawing provided by tvs design/Design Las Vegas and The Boring Company shows the entrance to the Las Vegas Convention Center Loop outside a new exhibition hall proposed for Las Vegas. Entrepreneur Elon Musk’s dream of a tunnel transit system may finally become a reality in Las Vegas. Tourism officials in Sin City announced Wednesday, March 6, 2019, they might soon grant him a contract to build and operate a mile-and-a-quarter-long project with autonomous electric vehicles to move people around a mega convention center. (tvs design/Design Las Vegas/The Boring Company via AP)

Skepticism Has Not Subsided

Musk in December unveiled a test tunnel built under a Los Angeles suburb, allowing reporters and guests to take rides. It came almost two years to the day after Musk announced on Twitter that “traffic is driving me nuts” and he was “going to build a tunnel boring machine and just start digging.”

“Look at everything that we have built in Las Vegas, and this city and everybody who has built it found ways to make that happen,” he said. “As long as this continues to make sense, I believe that we will figure out how to make it happen.” — Steve Hill, president and CEO of the Las Vegas Convention and Visitors Authority

“I am actually going to do this,” he added in response to initial skepticism. Soon after, he began The Boring Company, tongue in cheek intentional.

The skepticism has not subsided. The Boring Company in November canceled its plans for another test tunnel in the Los Angeles area after a neighborhood group filed a lawsuit over concerns about traffic and disruptions from trucks hauling out dirt during the boring process.

Now plans for a project in Chicago appear to be in jeopardy. Neither mayoral candidate approves of plans announced in June that called for a system similar to the one proposed for Las Vegas. It would carry people between Chicago’s downtown and O’Hare International Airport at speeds of up to 150 mph through underground tunnels.

Hill said he does not expect permitting processes in the Las Vegas area to put the project behind schedule should it be approved, because the city is “committed to innovation.”

“Look at everything that we have built in Las Vegas, and this city and everybody who has built it found ways to make that happen,” he said. “As long as this continues to make sense, I believe that we will figure out how to make it happen.”

Company Expects to Deliver Project by 2021

Hill acknowledged the technology that will be used in the project has not been used commercially, but he said the company has the talent to make the project a reality.

“If the community likes it, and they come, they ride at the convention center and they say ‘This is great. It’s comfortable. It’s fast. It’s awesome.’ Well, there are other places it can go.” — Steve Davis, president of The Boring Company

The confidence in The Boring Company is such that the authority already has optional routes for the tunnel system to expand to connect to the Las Vegas Strip, the city’s downtown and McCarran International Airport. An expansion of that magnitude could be a solution to the congestion affecting the Strip and nearby areas.

“We do see it as a real opportunity and something we would like to pursue,” Hill said.

Steve Davis, president of The Boring Company, said the speed at which the vehicles will move inside the convention center’s tunnels will depend on the number of stations built. The technology involved in the project is being tested every day in the tunnel in Hawthorne, California, he said.

The company believes it will be able to deliver the project by the 2021 deadline, just before that year’s edition of the CES tech gadget gathering. It is also eyeing the expansion possibility.

“If the community likes it, and they come, they ride at the convention center and they say ‘This is great. It’s comfortable. It’s fast. It’s awesome.’ Well, there are other places it can go,” Davis said.