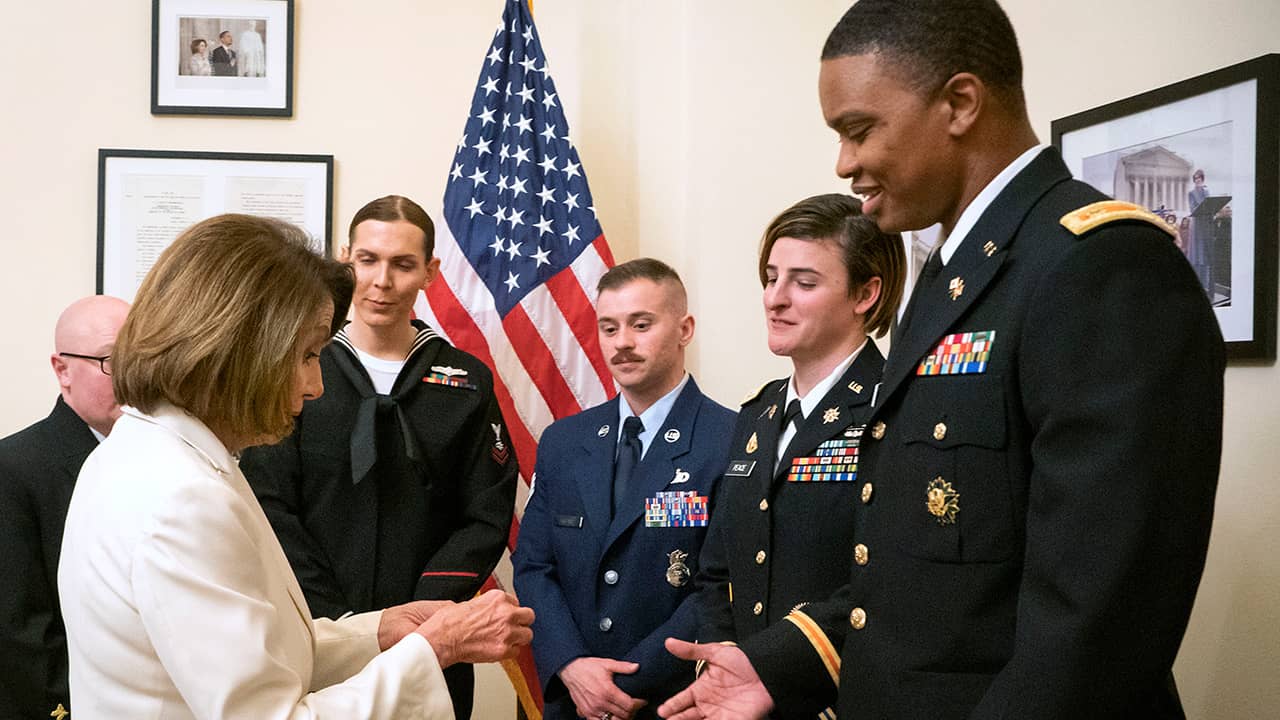 SAN DIEGO — Lindsey Muller served in the Army as a man for nearly a decade before telling her commanders in 2014 that she identified as a woman and would resign because military policy barred transgender personnel. Her superiors, citing her outstanding performance, urged the decorated attack helicopter pilot to stay so she did.
After then-President Barack Obama changed the policy, she started dressing in uniform as a woman. Muller went on to be recommended for a promotion as the surgery to complete her gender transition was scheduled, but the operation was postponed in 2017 when President Donald Trump announced on Twitter that he was reinstituting the ban.
With the ban now blocked by lawsuits, transgender troops Wednesday will testify for the first time before Congress.
In the nearly three years since the U.S. military welcomed transgender people into the armed forces, they have served without incident. Some, like Muller, have earned prestigious medals or received other forms of recognition.
They say they stand as proof against President Donald Trump’s argument that their presence is a burden.

Among Those Set to Testify Will Be Five Transgender Troops

“Once you meet transgender people who have served in the different branches … it’s really hard to dismiss the fact that you will find Purple Heart recipients, Bronze Star winners, attack aviators, Navy SEALs,” said Muller, who will not be testifying but is a plaintiff in one of four lawsuits challenging the ban. “We’ve been here, and we will continue to be here regardless. In what capacity is up to the administration.”


“Once you meet transgender people who have served in the different branches … it’s really hard to dismiss the fact that you will find Purple Heart recipients, Bronze Star winners, attack aviators, Navy SEALs.” — Lindsey Muller
The hearing will be held by the subcommittee of the House Armed Services Committee chaired by Democratic Rep. Jackie Speier. Speier introduced bipartisan legislation in February that would prohibit the Department of Defense from denying the enlistment or continued service of transgender people if Trump’s ban takes effect.
Similar legislation was introduced in the Senate. It’s unclear whether the legislation would be voted on as a stand-alone bill or be folded into the defense bill, which could be harder for Trump to veto.
Among those set to testify will be five transgender troops and Dr. Jesse Ehrenfeld, a Navy Reserve commander who pushed the military to include transgender people.
Also testifying will be Pentagon officials including Vice Adm. Raquel Bono, the director of the Defense Health Agency, and James Stewart, acting under-secretary of defense for personnel and readiness.
They are expected to be questioned about whether transgender troops have affected the military’s warfighting abilities and whether any medical evidence supports excluding them.
The American Medical Association has stated there is none.

Muller, a 19-year combat veteran who served multiple tours in Iraq, diligently followed the Pentagon guidelines to transition. She was grounded because she was on hormone replacement therapy, though non-transgender people on hormone replacement therapy routinely receive waivers to keep flying.
Since then, Muller has been an aviation safety officer in South Korea, overseeing 1,100 troops.
Shortly after serving in the new job, she was hand-picked to advise commanders on managing international incidents near the demilitarized zone. Her commander recommended her for a promotion, calling her the best battalion officer in the brigade.

At the time, Muller was scheduling surgery, the final step to complete her transition, when Trump announced on Twitter in 2017 “that the United States Government will not accept or allow transgender individuals to serve in any capacity in the U.S. Military,” and it “cannot be burdened with the tremendous medical costs and disruption that transgender in the military would entail.”
She has since gotten the surgery and continues to serve.
While the Supreme Court in January lifted national injunctions by two courts, two other injunctions by courts in Washington and Maryland remain in place.
Military chiefs testified before Congress last year that they found no problems with transgender troops on morale or unit cohesion, though Marine Corps Commandant Gen. Robert Neller said commanders have had issues with medical leave.

An Estimated 14,700 Troops Identify as Transgender

An estimated 14,700 troops on active duty and in the Reserves identify as transgender.
The Defense Department spent $2.2 million on gender transition-related care in 2017 out of its more than $50 billion annual military health care budget, which covers family members and dependents.
From June 2016 to November 2017, 34 non-genital sex reassignment surgeries and one genital surgery were completed, according to a 2018 Pentagon report.
The administration’s expected policy would allow transgender people to serve if they remain in their biological sex. It would grandfather in current service members, though the government has also said it retains the right to eliminate that protection.
Transgender troops say the ban mirrors the “don’t ask, don’t tell” policy that prohibited gay men and women from serving openly in the armed forces before Congress repealed it in 2010.
Army Lieutenant Gen. Tom Spoehr, who retired in 2016 when transgender troops started serving openly, witnessed no problems. But he agrees with Trump’s policy because of suicide rates among people with gender dysphoria, a condition of extreme distress from not identifying with one’s biological gender.

‘People With Gender Dysphoria Are at Greater Risk of Harming Themselves’

“There are great examples of people serving who are transgender and made it work,” said Spoehr, director of The Heritage Foundation’s Center for National Defense. “But the military has to work with the preponderance that the data and evidence say people with gender dysphoria are at much greater risk of harming themselves and not being at their best.”


“There are great examples of people serving who are transgender and made it work. But the military has to work with the preponderance that the data and evidence say people with gender dysphoria are at much greater risk of harming themselves and not being at their best.” — Army Lieutenant Gen. Tom Spoehr
U.S. Army Maj. Ian Brown, 38, disagrees that transgender troops have more problems than the general military population.
“At the end of the day, as a trans soldier, I’m going to do my job to the best of my ability, and that’s to fight for everyone’s freedoms,” said the two-time Bronze Star recipient who transitioned from female to male while advising the Army’s deputy chief of staff in operations and planning. “That’s not going to change.”
Master Sgt. Erika Stoltz, 56, served four combat deployments and earned two Bronze Stars. After returning from Afghanistan, she transitioned from male to female while working full-time for the Army.
During her first post-transition deployment, she received a humanitarian award for her hurricane relief work in the Caribbean.
“There have been people who have blatantly run into the face of certain death to save another soldier,” she said. “They’re not worried about what gender they are, they’re just trying to save their buddy.”
Related Topics:Armyattackbanmilitary policyPresident Donald Trumpresigntransgenderwoman
Up Next

Is a Cross OK on Public Land? Supreme Court Will Decide.