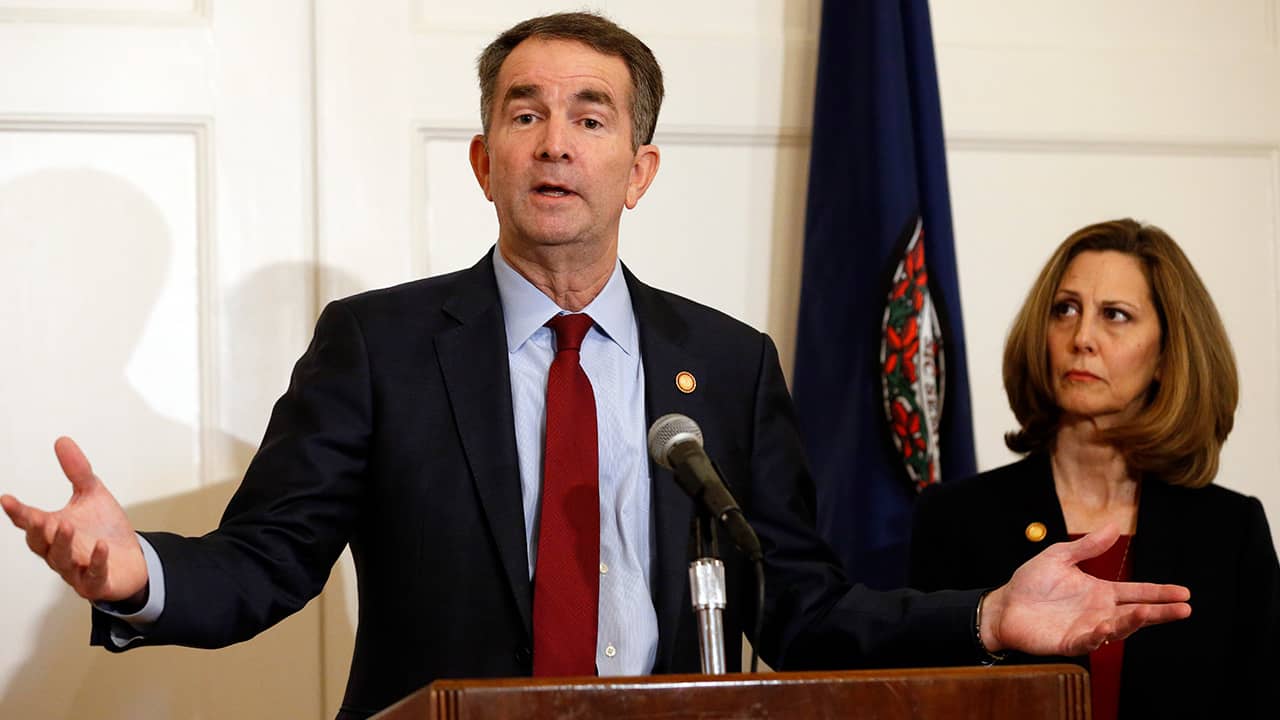 When Virginia Gov. Ralph Northam refused to resign last week, he did so in the shadow of a Capitol built by a founding father and a slave owner, in the former seat of the Confederacy still wrestling with what to do about statues that honor those who fought to preserve slavery.
The 35-year-old photo on his yearbook page of a person in blackface and another person in a Ku Klux Klan robe has brought about a stunning reversal of fortune in Northam’s political career and laid bare for the nation just how deeply racist behavior remains interwoven in American culture, institutions and politics. In rejecting calls to step down, the 59-year-old white son of Virginia came across to many African-Americans as displaying a sense of white privilege. This image shows Virginia Gov. Ralph Northam’s page in his 1984 Eastern Virginia Medical School yearbook. The page shows a picture, at right, of a person in blackface and another wearing a Ku Klux Klan hood next to different pictures of the governor. It’s unclear who the people in the picture are, but the rest of the page is filled with pictures of Northam and lists his undergraduate alma mater and other information about him. (Eastern Virginia Medical School via AP)

“What we have learned over the last 24 hours along with all the incidents of the last two years brings front and center the need for this nation to deal with the question of race once and for all,” NAACP President Derrick Johnson said in an interview Saturday. “Because we have (President Donald) Trump in the White House, who has created a political landscape of intolerance and racial hatred, this has exposed a wound that has been festering for a while now.”
The incident came on the first day of Black History Month and as Virginians prepare to mark the 400th anniversary of the arrival of the first enslaved Africans to the settlement of Jamestown.
“I think a lot of black folks are tired of apologies and talking,” said Wes Bellamy, a councilman in Charlottesville, Virginia, who has worked for the removal of Confederate statues in the city. “This is another ugly stain on our state’s history. We are going to have to commit ourselves to making this right — not just with our words, but with our resources.”

Northam Says Photo Doesn’t Represent Who He Is Now

Should Northam, a Democrat, ultimately step down, Lt. Gov Justin Fairfax would become the second black governor in the South since Reconstruction. Last month, Fairfax, the only black official currently elected statewide, sat down in protest as the Virginia Senate recognized Lee-Jackson Day, which honors Confederate generals Robert E. Lee and Stonewall Jackson. Tara Raigns, of Petersburg, Va., right, reacts to Gov. Ralph Northam’s comments during a news conference in the Governor’s Mansion in Richmond, Va., on Saturday, Feb. 2, 2019. She joined protesters outside, calling for his resignation. (Alexa Welch Edlund/Richmond Times-Dispatch via AP)

Such incidents are not only hurtful; they can be harmful when they happen at institutions of higher learning and are perpetrated by people who go on to impact the lives of people of color as decision-makers — from politicians to doctors. A recent University of Virginia study showed that black Americans are systematically undertreated for pain relative to white patients, and that white laypeople and medical students and residents hold false beliefs about the biological differences between the races — beliefs that can affect the perception and treatment of black patients.

“I have worked closely with Ralph Northam over many years. He has been a friend to me and has treated my family and me with hospitality and respect,” Fairfax wrote in a statement Saturday, noting that he is a descendant of people enslaved in Virginia. “While his career has been marked by service to children, soldiers and constituents, I cannot condone the actions from his past that, at the very least, suggest a comfort with Virginia’s darker history of white supremacy, racial stereotyping, and intimidation.”
Fairfax has not called for Northam’s resignation, but by Sunday, he was one of the few Democrats who had spoken publicly and not called for him to step down.
Northam “doesn’t want to go down on something he doesn’t think he did,” said Anthea Butler, a University of Pennsylvania religion professor who has written about politics. “I don’t know how he thinks he can show up in the black community. He’s hobbling what he can do for his African-American constituents, and we’re asked to do the labor of forgiveness and healing. We’re over it. Why should he be allowed to stay?”
His stance illustrates how many Americans have come to view racism since the end of legally-enforced segregation, defined by only the most egregious, blatant examples like using the N-word or the Ku Klux Klan.
“That’s the boundary. Everything else is not,” said Carol Anderson, Emory University African American studies professor and author of ‘White Rage: The Unspoken Truth of Our Racial Divide.’
“Unless you’re burning a cross, you’re not racist,” Anderson said. “But racism since the Civil Rights Movement is deceptively structural.”