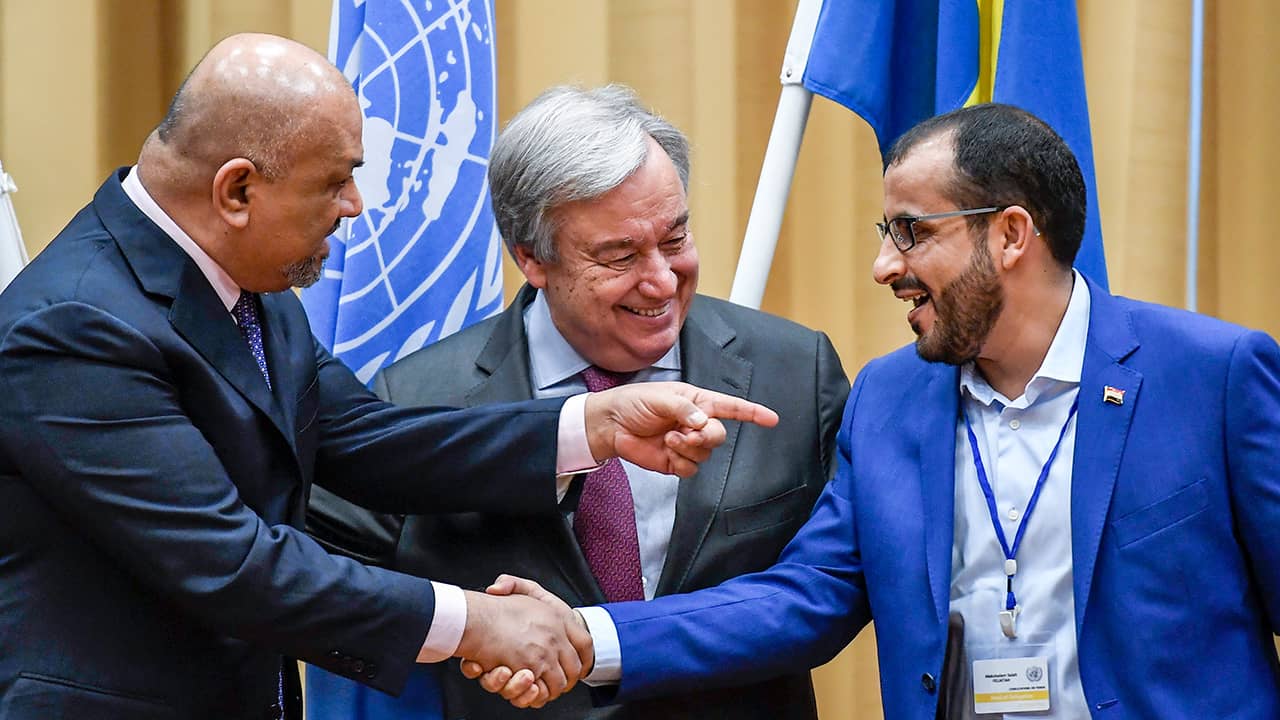 RIMBO, Sweden — Yemen’s warring sides agreed Thursday to an immediate cease-fire in the strategic port city of Hodeida, where fighting has disrupted vital aid deliveries and left the country on the brink of starvation in the 4-year-old civil war.
The agreement includes a withdrawal of combatants to outside the city limits within two weeks and was praised by U.N. Secretary-General Antonio Guterres as “real progress” to alleviate Yemen’s suffering and show commitment to a political solution.
The truce, along with a mass prisoner exchange agreement reached earlier, were seen as important first steps toward further talks in January aimed at drawing down a stalemated conflict that has killed thousands of people and left millions more in misery in the Arab world’s poorest country.
The cease-fire and pullback of forces eases fears that the battle for Hodeida could force an outright closure of its port, which would have been disastrous, since it is the main entry point for food and other humanitarian aid for millions of Yemenis. Throughout months of fighting around Hodeida, the port remained open, although movement of aid out of the city to the rest of the country was slowed because it had to avoid the front lines.
But the deal might not mean an immediate or significant difference in easing the suffering of Yemenis. Ships bringing supplies into Hodeida must still undergo strict searches by U.N. monitors to ensure no weapons are aboard, a process that has delayed deliveries.

It Is a Struggle to Get Food to Families

Once in the country, it is a struggle to get food to families who need it because of corruption or mismanagement. More than 22 million of Yemen’s 29 million need humanitarian aid, and the most desperate — over 8 million — have no food other than international relief supplies.

The U.N.-sponsored talks began last week with low expectations but saw some progress with the agreement of a prisoner swap involving about 15,000 captives, scheduled to occur by Jan. 20.
Both sides have said they sought to build on the goodwill. U.N. envoy Martin Griffiths has said he wants to remove Hodeida from the conflict so that aid can flow freely. Thursday’s agreement aims to do just that, with troops retreating to outside the city limits and a province-wide cease-fire.
“This will be the first withdrawal of any forces in the history of this conflict. And it will be done in the area of the greatest sensitivity, and difficulty and danger,” he said, adding that other areas under discussion will continue in the weeks and months ahead.
On Wednesday, he said he gave both sides a draft agreement for consideration that included proposals for reopening the airport in the capital of Sanaa, as well as one for a political framework for a postwar Yemen.
It was unclear how far they have come in agreeing on those broader issues, although some progress was announced toward drawing down fighting in the central city of Taiz and creating “humanitarian corridors” — localized cease-fire zones — to allow in aid shipments.
Asked if rivals Iran and Saudi Arabia had been involved behind the scenes, Guterres said they had played a constructive role in the Yemeni-led talks. A cashier works at the Central Bank of Yemen’s internationally recognized government in Aden, Yemen, Thursday, Dec. 13, 2018. A sense of normalcy has returned to Aden, now the seat of power for Yemen’s internationally recognized government, but many challenges remain for bringing a lasting peace to the Arab world’s poorest country. (AP Photo/Jon Gambrell)

Offering Hope for Millions of Yemenis

“Obviously there has been very relevant consultations with (Iran and Saudi Arabia) and all other regional parties, and I must say I am very grateful for the very constructive approach that I have felt in the last few weeks in order to facilitate creating the conditions for this agreement to be possible,” he said.


“Obviously there has been very relevant consultations with (Iran and Saudi Arabia) and all other regional parties, and I must say I am very grateful for the very constructive approach that I have felt in the last few weeks in order to facilitate creating the conditions for this agreement to be possible.” — UN Secretary Geleral Antonio Guterres
The World Food Program welcomed the cease-fire announcement, saying it offers hope for millions of Yemenis.
“Any progress toward peace is good progress, as long as it helps the Yemeni people who have suffered so much in this conflict,” WFP Executive Director David Beasley said in a statement.
Noting that Yemen imports nearly all its food and about 70 percent of that goes through Hodeida’s port, Beasley added that “what all of Yemen needs the most, though, is a permanent, lasting and full peace.”
The mounting humanitarian crisis has galvanized international support for ending the war, which has raged for years with little notice from the rest of the world. Western fatigue with the conflict also is growing, especially after the Oct. 2 killing of Washington Post journalist Jamal Khashoggi at the Saudi Consulate in Istanbul, Turkey, allegedly by members of Crown Prince Mohammed bin Salman’s royal entourage. The U.S. refueling of Saudi warplanes has stopped after months of airstrikes that have killed civilians.

The Conflict Has Killed More Than 60,000 People

In addition, The Associated Press conducted a year-long investigation into the conflict, finding parents who were giving up meals so they could dedicate what little food they had to keeping children alive. It also found pockets of famine in the north that relief agencies had overlooked, where families were boiling leaves to survive. The AP also uncovered abuses by all sides in the conflict, including rampant torture in prisons run by Houthi rebels in the north and the United Arab Emirates, a coalition member, and its allies in the south.
An international group tracking the war said this week that the conflict has killed more than 60,000 people, including combatants and civilians, since 2016.
The U.S.-based Armed Conflict Location & Event Data Project, or ACLED, said in a report Tuesday that more than 28,000 people — both civilians and combatants — have been killed in the first 11 months of 2018, an increase of 68 percent from 2017. More than 3,000 were killed in November, the deadliest month since ACLED started collecting data.
The group said 37 percent of the civilian deaths in 2018 occurred in Hodeida. ACLED bases its figures on media reports of each incident of violence in the war.
ACLED’s figures do not include the last few months of 2014, when Houthi rebels captured Sanaa and much of northern Yemen, nor the casualties in 2015, when the coalition joined the war on the side of President Abed Rabbo Mansour Hadi’s government.