COX’S BAZAR, Bangladesh — The head of Bangladesh’s refugee commission said plans to begin the repatriation of 700,000 Rohingya Muslims to Myanmar on Thursday were scrapped after officials were unable to find anyone who wanted to return.

The refugees “are not willing to go back now,” Refugee Commissioner Abul Kalam told The Associated Press. He said officials “can’t force them to go” but will continue to try to “motivate them so it happens.”

Some people on the government’s repatriation list disappeared into the sprawling refugee camps to avoid being sent home, while others joined a large demonstration against the plan.

More than 700,000 Rohingya Muslims have fled to Bangladesh from western Myanmar’s Rakhine state to escape killings and destruction of their villages by the military and Buddhist vigilantes that have drawn widespread condemnation of Myanmar.

The United Nations, whose human rights officials had urged Bangladesh to halt the repatriation process even as its refugee agency workers helped to facilitate it, welcomed Thursday’s development.

Firas Al-Khateeb, a spokesman for the U.N. High Commissioner for Refugees in Cox’s Bazar, said it was unclear when the process might begin again. “We want their repatriation, but it has to be voluntary, safe and smooth,” he said.

“We have arranged everything for you, we have six buses here, we have trucks, we have food. We want to offer everything to you. If you agree to go, we’ll take you to the border, to the transit camp.” — Bangladesh Foreign Minister A.H. Mahmood Ali

Bangladesh officials declined to say whether another attempt at repatriation would be made Friday.

Bangladesh Foreign Minister A.H. Mahmood Ali told reporters in Dhaka late Thursday that “there is no question of forcible repatriation. We gave them shelter, so why should we send them back forcibly?”

At the Unchiprang refugee camp, a Bangladeshi refugee official implored the Rohingya on Thursday to return to their country over a loudspeaker.

“We have arranged everything for you, we have six buses here, we have trucks, we have food. We want to offer everything to you. If you agree to go, we’ll take you to the border, to the transit camp,” he said.

“We won’t go!” hundreds of voices, including children’s, chanted in reply.

Some Refugees Don’t Want to Go Back

Some refugees on the repatriation lists — which authorities say were drawn up with assistance from the UNHCR — said they don’t want to go back.

“They killed my husband; now I live here with my parents. I don’t want to go back.” — Setara, Rohingya refugee

At the Jamtoli refugee camp, one of the sprawling refugee settlements near the city of Cox’s Bazar, 25-year-old Setara said she and her two children, age 4 and 7, were on a repatriation list, but her parents were not. She said she had never asked to return to Myanmar, and that she had sent her children to a school run by aid workers Thursday morning as usual.

“They killed my husband; now I live here with my parents,” said Setara, who only gave one name. “I don’t want to go back.”

She said that other refugees on the repatriation list had fled to other camps, hoping to disappear amid the crowded lanes of refugees, aid workers and Bangladeshi soldiers, which on Thursday were bustling with commerce and other activity.

Bangladesh had planned to send an initial group of 2,251 back from mid-November at a rate of 150 per day.

Myanmar officials, speaking late Thursday in the captal, Naypyitaw, said they were ready to receive the refugees. Despite those assurances, human rights activists said conditions were not yet safe for the Rohingya to go back. 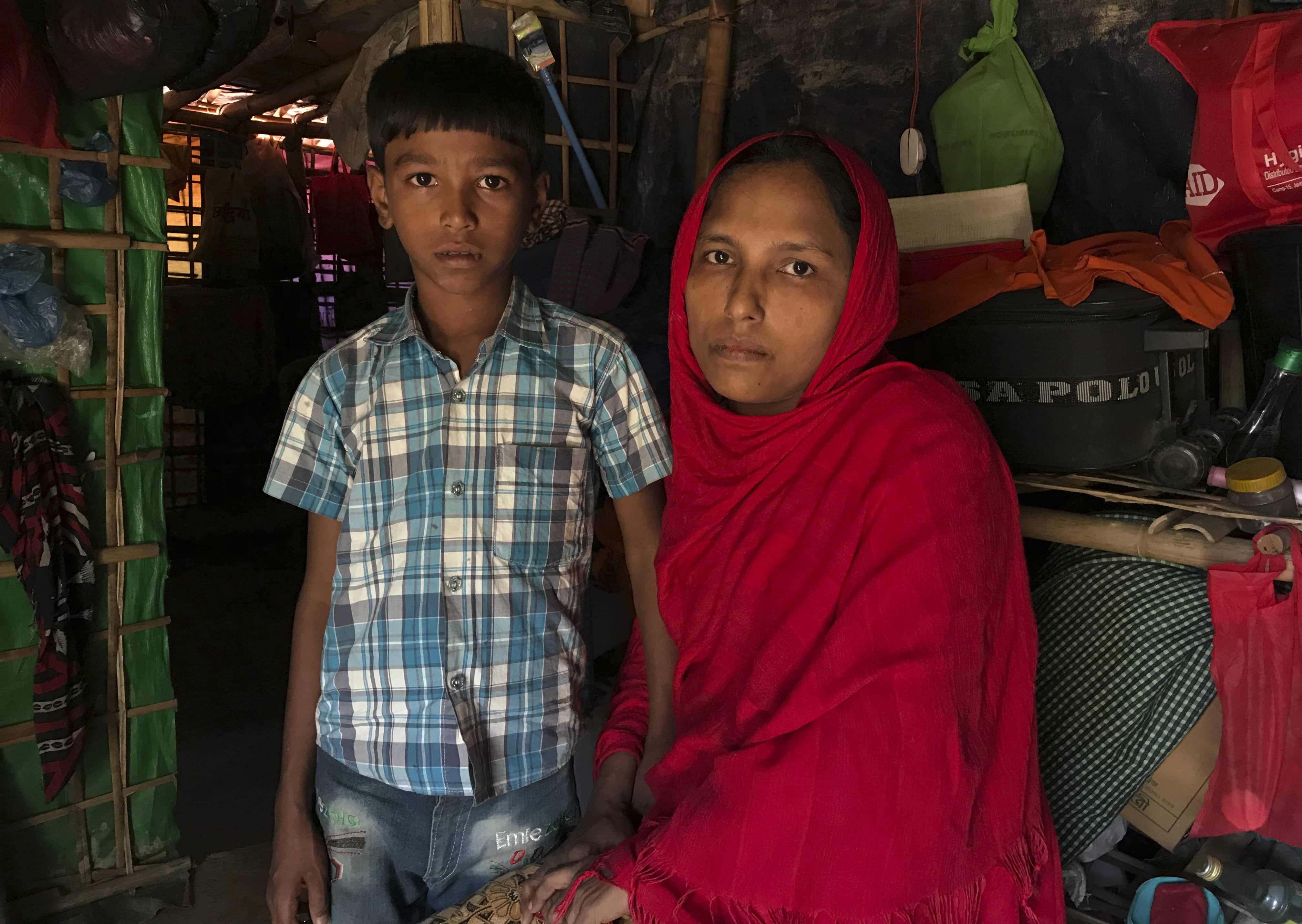 Rohingya refugees Sitara Begum with her son Mohammed Abbas, who are in the list for repatriation wait in their shelter at Jamtoli refugee camp, near Cox’s Bazar, Bangladesh, Thursday, Nov. 15, 2018. Bangladesh authorities said Thursday that repatriation to Myanmar of some of the more than 700,000 Rohingya Muslims who fled army-led violence will begin as scheduled if people are willing to go, despite calls from United Nations officials and human rights groups for the refugees’ safety in their homeland to be verified first. (AP Photo/Dar Yasin)

Most Do Not Accept That the Rohingya Muslims

The huge exodus of Rohingya began in August last year after Myanmar security forces launched a brutal crackdown following attacks by an insurgent group on guard posts. The scale, organization and ferocity of the operation led to accusations from the international community, including the U.N., of ethnic cleansing and genocide.

Most people in Buddhist-majority Myanmar do not accept that the Rohingya Muslims are a native ethnic group, viewing them as “Bengalis” who entered illegally from Bangladesh, even though generations of Rohingya have lived in Myanmar. Nearly all have been denied citizenship since 1982, as well as access to education and hospitals.

The refugees survived the ransacking of villages, rapes and killings in Myanmar, but for many, life in Bangladesh’s squalid refugee camps has been bleak.

The refugees who’ve arrived in the last year joined a wave of 250,000 Rohingya Muslims who escaped forced labor, religious persecution and violent attacks from Buddhist mobs in Myanmar during the early 1990s.

Access to education and employment has been far from assured.

Hosting More Than a Million Rohingya Is Taxing Local Resources

Foreign leaders, including U.S. Vice President Mike Pence, criticized Myanmar’s Nobel Peace Prize-winning leader Aung San Suu Kyi this week on the sidelines of a summit of the Association of Southeast Asian Nations in Singapore for her handling of the Rohingya crisis.

Negotiations for repatriation have been in the works for months, but plans last January to begin sending refugees back were called off amid concerns among aid workers and Rohingya that their return would be met with violence.

Foreign leaders, including U.S. Vice President Mike Pence, criticized Myanmar’s Nobel Peace Prize-winning leader Aung San Suu Kyi this week on the sidelines of a summit of the Association of Southeast Asian Nations in Singapore for her handling of the Rohingya crisis.

But on Thursday, Pence said that U.S. officials were “encouraged to hear that” the repatriation process would begin.

Canadian Prime Minister Justin Trudeau said his country would continue working with international partners including the U.N. “to ensure that the Rohingya themselves are part of any decisions on their future.”