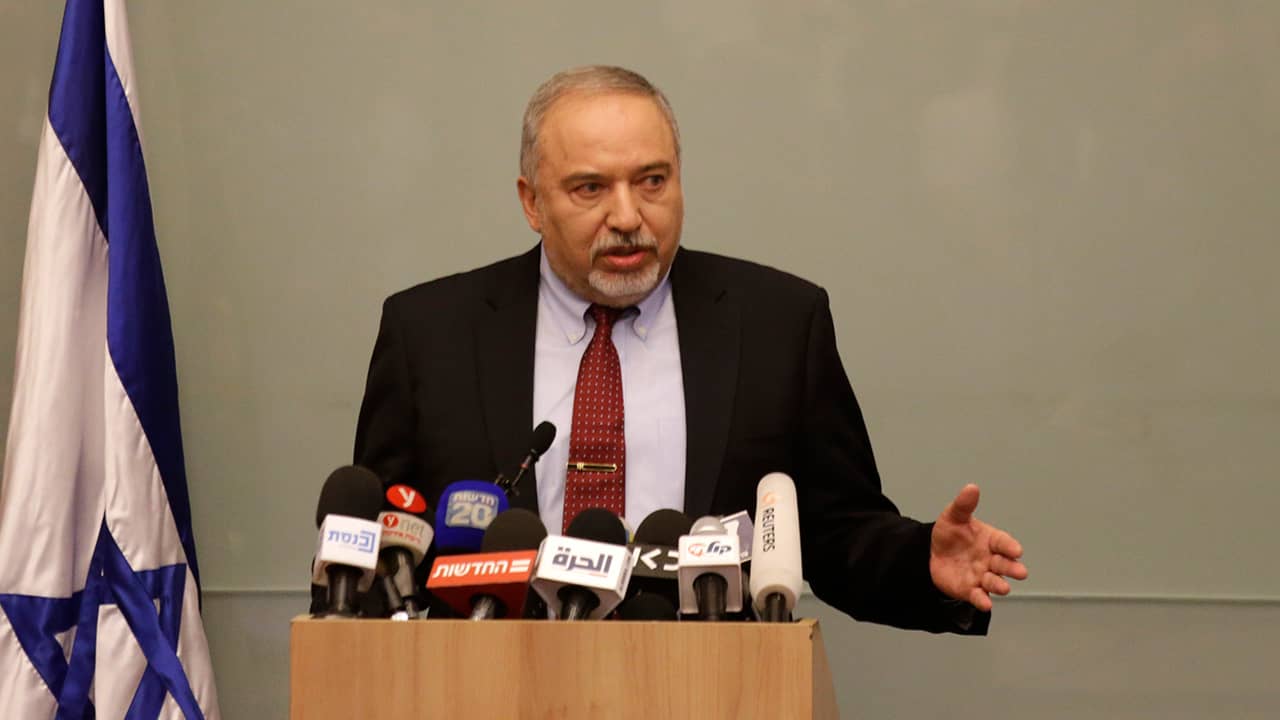 JERUSALEM — Israel’s defense minister on Wednesday abruptly resigned to protest a new cease-fire with Hamas militants in Gaza, throwing the government into turmoil and pushing the country toward an early election.

Avigdor Lieberman’s decision was ostensibly a show of anger over Tuesday’s informal truce with Israel’s Hamas enemies. But in many ways, it was the opening round of a new political campaign.

His defection leaves Prime Minister Benjamin Netanyahu with the narrowest of parliamentary majorities — only 61 of 120 seats in his coalition.

In theory, Netanyahu can continue to govern until parliamentary elections scheduled for a year from now. But with another coalition rival, Naftali Bennett, threatening to leave the coalition if he doesn’t get the defense portfolio, the days of Netanyahu’s government appear numbered.

Here’s a closer look at the developments:

After two days of heavy fighting, Netanyahu’s decision to accept the Egyptian-brokered truce was more than a case of cooler heads prevailing.

“It isn’t true that Netanyahu doesn’t have a policy. He does: He is a firm believer in perpetuating the status quo.” — Israeli columnist Nahum Barnea

The longtime Israeli leader knows well that the military option has its limits. Israel has maintained a crippling blockade on Gaza and fought three wars against Hamas since the Islamic militant group seized power in 2007. This has inflicted heavy damage on Gaza, but Hamas remains firmly in power.

Ousting the group would require a military operation that could take months and cost the lives of thousands of Palestinian civilians and many Israeli soldiers. Reluctant to pay such a price, Netanyahu instead seems content to keep a weakened Hamas in check.

Netanyahu may also have a deeper agenda. Leaving the Palestinians torn between two governments — Hamas in Gaza and the internationally backed Palestinian Authority in the West Bank — works in his favor.

With the Palestinians weak and divided, there is little pressure for Netanyahu to make concessions, allowing him to expand West Bank settlements and cement Israeli control over the territory.

Palestinian President Mahmoud Abbas has repeatedly accused Israel and the U.S. of collaborating behind his back and preparing a peace plan offering the Palestinians a mini-state in the Gaza Strip and small autonomous areas of the West Bank. That falls short of his demand for a fully independent Palestinian state that includes both territories in full.

“It isn’t true that Netanyahu doesn’t have a policy. He does: He is a firm believer in perpetuating the status quo,” wrote Israeli columnist Nahum Barnea.

Lieberman is a former aide to Netanyahu who has been both an ally and rival over the years. He currently heads Yisrael Beitenu, a small ultranationalist party that appeals to immigrants from the former Soviet Union.

A brawny former nightclub bouncer known for his sharp tongue and Russian-accented Hebrew, the Soviet-born Lieberman has sought to project an image as a gruff, tough-talking politician. At times, he has been critical of Israel’s Arab minority, liberal opposition groups and even Israel’s Arab ally Egypt. Sitting in the opposition, he once threatened to assassinate Hamas leader Ismail Haniyeh if he held the defense portfolio.

But as defense minister, Lieberman’s accomplishments remain limited, and Haniyeh is alive and well in Gaza.

Calling the cease-fire “surrender to terrorism,” Lieberman also made clear that his frustrations run much deeper. He said he also opposed a recent decision to allow Qatar to deliver $15 million in aid to Gaza and the cancellation, under heavy international pressure, of the planned demolition of a Bedouin village in the West Bank.

“We are buying quiet in the short-term at the cost of severe damage to our security in the long-term,” he said. “The weakness we displayed also projects itself to other arenas.”

If Netanyahu calls early elections, opinion polls forecast a broad victory by his Likud Party and his hard-line partners, including Lieberman.

“I see the big picture of Israeli security that I cannot share with the public. In times like these, leadership is not doing the easy thing. Leadership is doing the right thing, even if it is hard. Leadership is sometime facing criticism.” — Prime Minister Benjamin Netanyahu

With his resignation, Lieberman appears to be positioning himself for elections by painting Netanyahu as soft and portraying himself as a defense hawk.

Bennett, another former Netanyahu aide who leads the religious Jewish Home Party, is likely to use a similar strategy. Like Lieberman, Bennett had favored tougher military action against Hamas.

All three appeal to a similar bloc of voters. Although Netanyahu would likely emerge as the leader, siphoning off votes would strengthen his rivals and give them increased leverage.

Netanyahu’s rivals are eager to tap into public anger over the cease-fire. Residents in rocket-battered towns in southern Israel, typically Likud strongholds, have protested the truce.

Lieberman is especially desperate. His party holds only five Knesset seats, barely above the threshold required to enter the parliament.

Netanyahu, meanwhile, will probably market himself as the responsible adult in a room of inexperienced children.

“I see the big picture of Israeli security that I cannot share with the public,” he said Wednesday as he defended the cease-fire. “In times like these, leadership is not doing the easy thing. Leadership is doing the right thing, even if it is hard. Leadership is sometime facing criticism.”

One wild card: Police have recommended indicting Netanyahu in a series of corruption investigations. If Israel’s attorney general decides to file charges, Netanyahu could be weakened or even forced to step down, shaking up any election campaign. However, if he is re-elected before a decision is made, it could make it much harder to press charges against a leader with a fresh mandate. Attorney General Avichai Mandelblit has not said when he will decide.

In Gaza, Hamas declared victory in the latest round of fighting, boasting that it stood up to the powerful Israeli military. Large crowds of supporters celebrated in the streets.

“The resistance has sent a clear message to the occupation that it can hurt them,” boasted Ismail Radwan, a Hamas spokesman.

After the dust settles, Hamas will once again have to cope with running a territory where unemployment is over 50 percent, the economy is in tatters and where people cannot travel abroad.

“We have to bear in mind that Hamas’ popularity has improved on similar occasions in the past,” said Mkheimer Abusada, a Gaza analyst. “But that was for a short period of time, after which people would face the harsh reality of unemployment and poverty.”

Hamas will return its focus toward U.N. and Egyptian mediation aimed at easing the crippling Israeli blockade in exchange for assurances of quiet.