SAN FRANCISCO — She was a self-described “adrenaline junkie,” and he took “wow-worthy photos” of the couple posing at the edge of cliffs and jumping from planes that appeared on social media and a travel blog that attracted thousands of followers.

Moorthy and her husband, Vishnu Viswanath, 29, who were Indian expats living in California, fell to their deaths in Yosemite National Park last week while taking a selfie, the man’s brother said Tuesday.

In one post at the Grand Canyon this spring, 30-year-old Meenakshi Moorthy even warned daredevils who try to snap selfies from dangerous heights: “Did you know that wind gusts can be FATAL???” The caption accompanies a photo of Moorthy sitting on the edge of the canyon’s North Rim.

The couple’s latest trip turned out to be their last. Moorthy and her husband, Vishnu Viswanath, 29, who were Indian expats living in California, fell to their deaths in Yosemite National Park last week while taking a selfie, the man’s brother said Tuesday.

They set up their tripod near a ledge at a scenic overlook in the California park, Viswanath’s brother, Jishnu Viswanath, told The Associated Press. Visitors saw the camera the next morning and alerted park rangers, who “used high-powered binoculars to find them and used helicopters to airlift the bodies,” he said.

Rangers found their bodies about 800 feet below Taft Point, where visitors can walk to the edge of a vertigo-inducing granite ledge that offers spectacular views of the Yosemite Valley below.

Their thrill-seeking social media posts foreshadow the couple’s link to the growing problem of selfie deaths.

A study published this month in the Journal of Family Medicine and Primary Care said 259 people had died taking selfies between October 2011 and November 2017.

The report, based on findings from researchers in India who scoured worldwide media reports, said the main causes of selfie deaths were drowning, usually involving people being washed away by waves or falling from a boat, followed by people killed while posing in front of a moving train, deaths involving falls from high places or while taking pictures with dangerous animals.

More than 10 people have died at Yosemite this year, some from natural causes and others from falls, park spokesman Scott Gediman said.

Moorthy and Viswanath were born in India and had lived in the United States for a few years, most recently in the San Francisco Bay Area. Cisco India said Viswanath was a software engineer at the company’s San Jose, California, headquarters in Silicon Valley.

Moorthy Wanted to Work Full Time as a Travel Blogger

They graduated in 2010 from the College of Engineering, Chengannur, in the Alapuzha district of India’s Kerala state, one of their professors, Nisha Kuruvilla, told AP. She said Moorthy and Viswanath were both good students who were fond of traveling and had married at a Hindu temple in Kerala in southern India four years ago.

Moorthy described her and her husband as “travel obsessed” on their blog, “Holidays & Happily Ever Afters,” which was taken down Tuesday. It was filled with photos of the couple in front of snowy peaks and on romantic trips across Europe, where they took selfies from a gondola in Venice, at the Leaning Tower of Pisa and at the Vatican.

Moorthy wanted to work full time as a travel blogger, her brother-in-law said. She described herself in the blog as a “quirky free spirit” and “an ardent adrenaline junkie — roller coasters and skydiving does not scare me.”

She posed at the edge of the Grand Canyon wearing a Wonder Woman costume, writing, “A lot of us including yours truly is a fan of daredevilry attempts of standing at the edge of cliffs — and skyscrapers. But did you know that wind gust can be FATAL??? Is our life just worth one photo?”

The Couple Celebrated Their Wedding Anniversary by Skydiving

Her husband’s Facebook cover photo shows the couple smiling, with arms around each other standing at a Grand Canyon precipice. “Living life on the edge,” he wrote.

Her husband’s Facebook cover photo shows the couple smiling, with arms around each other standing at a Grand Canyon precipice. “Living life on the edge,” he wrote.

In a post from July 2017, the couple celebrated their wedding anniversary by skydiving in Santa Barbara, California. Moorthy posted a video on Instagram that shows her in a T-shirt saying, “Gimme Danger,” and flashing a thumbs-up as she jumps from the plane.

“I believe I can flyyy. I believe i can touch the skyyy,” she wrote in the post. “Aaaand touch the sky I did from an effin’ 18000 feet thanks to the unconditional love-ninja in my life, Vishnu, who literally took this year’s anniversary surprise a notch ‘higher’ than last year’s hot air ballooning adventure, by gifting this adrenaline junkie with one of the highest tandem skydives in the world!”

She also blogged about depression. In a post from April, Moorthy apologized to readers for going silent and “disappearing for more than a year.”

“Between battling the tightening tentacles of depression and blustering in the tempest of moving madness, I am afraid social media is taking a back seat??” she wrote.

The couple’s pictures indicated they liked to pose in scenic spots at sunset, which was the last time they were seen alive.

Another Couple Captured Pictures of Moorthy Prior to Her Fall

In an eerie coincidence, another couple who hiked to Taft Point captured pictures of Moorthy prior to her fall, saying she appears in the background of two of their selfies: 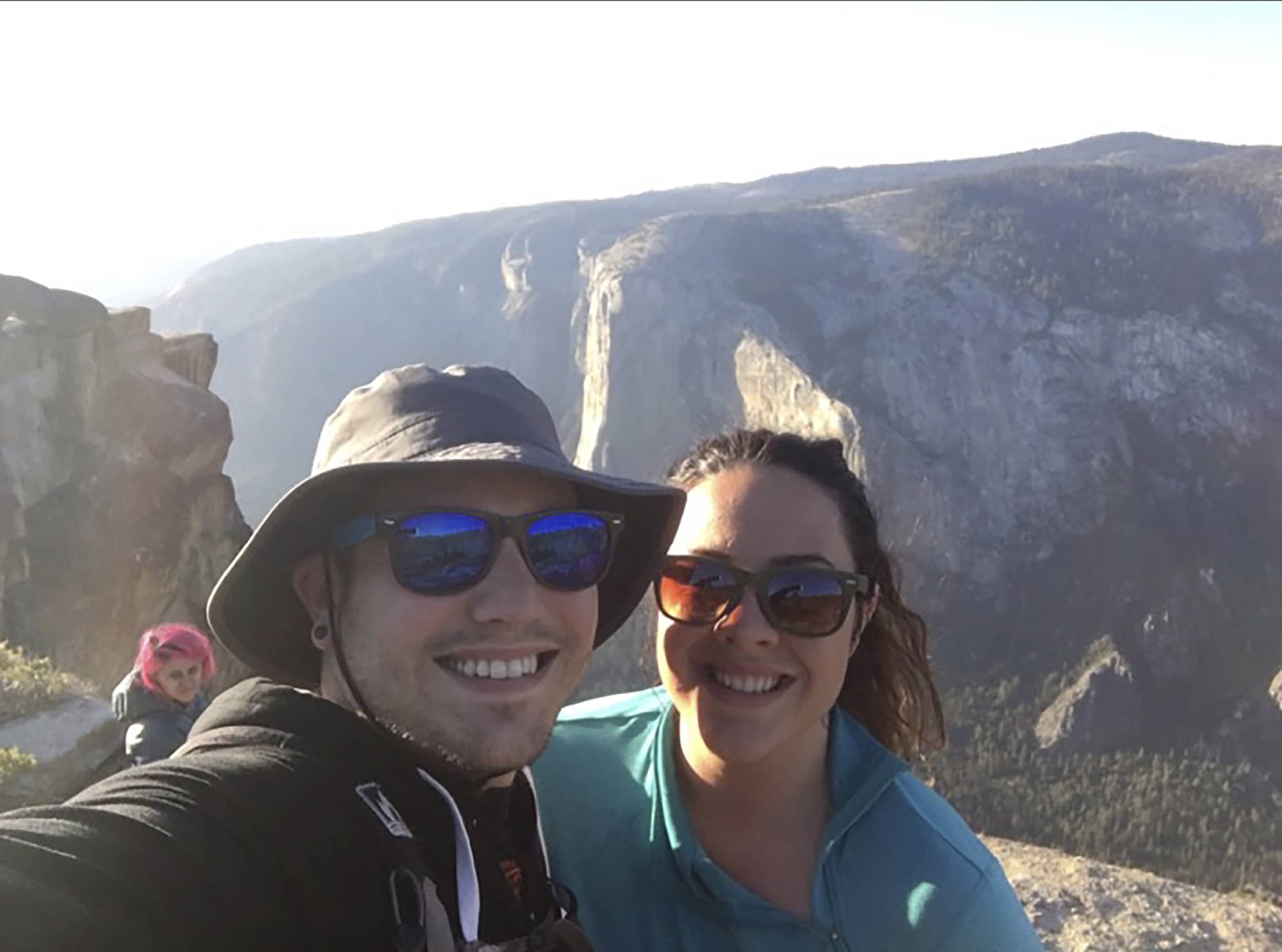 In this Oct. 21, 2018 photo provided by Sean Matteson, Matteson poses for a selfie with his girlfriend Drea Rose Laguillo, in Yosemite National Park, Calif. The couple said Meenakshi Moorthy, seen in background at left, the pink-haired woman who fell to her death in Yosemite Park accidentally appeared in two of their selfie photos taken shortly before the 30-year-old old fell from a popular overlook. Park rangers recovered the bodies of Moorthy and Vishnu Viswanath on Thursday, Oct. 25. (Sean Matteson via AP)

Sean Matteson said Moorthy stood out from the crowd enjoying sunset at the overlook because her hair was dyed bright pink. He said she made him a little nervous because she was close to the edge.

“She was very close to the edge, but it looked like she was enjoying herself,” said Matteson of Oakland, California. “She gave me the willies. There aren’t any railings. I was not about to get that close to the edge. But she seemed comfortable. She didn’t seem like she was in distress or anything.”

The travel advice website MyYosemitePark.com posted a photo of Taft Point to illustrate its “bad selfies” list, warning tourists: “Don’t pose on top of a huge granite drop-off.” It added, “It would only take a loose rock or bad footing to plummet.”

In India, after a rash of selfie-related deaths, the Tourism Ministry in April asked state government officials to safeguard tourists by installing signs in areas where accidents had occurred declaring them “no-selfie zones.”