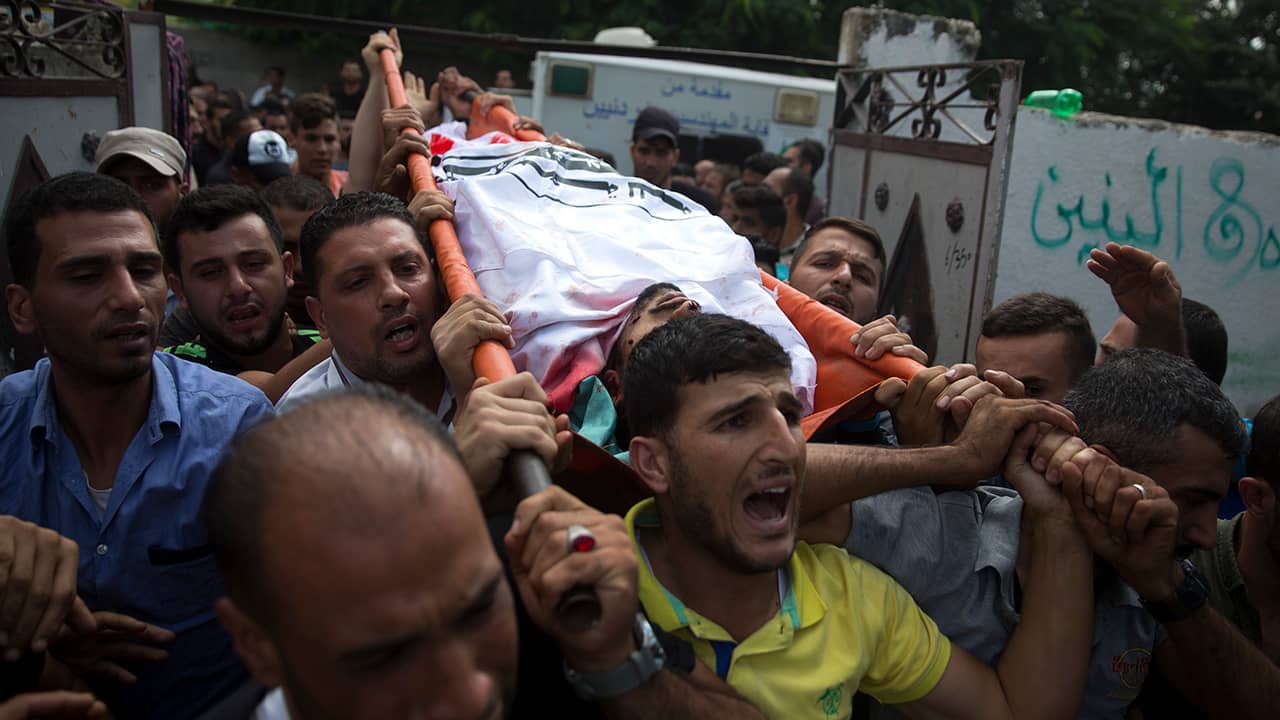 GAZA CITY, Gaza Strip — A high-level Egyptian delegation on Wednesday held urgent talks with Gaza’s Hamas rulers, seeking to restore calm after a rocket from the Palestinian area slammed into a home in southern Israel and the Israeli military responded with airstrikes on Hamas targets.

Israel and Hamas, an Islamic group that seeks Israel’s destruction, have fought three wars since Hamas seized control of Gaza since 2007. Israel and Egypt have also maintained a blockade over the territory since the Hamas takeover. The restrictions, aimed at weakening Hamas, have ravaged Gaza’s economy.
Hamas has led mass protests along the border with Israel for the past six months, seeking to put pressure on Israel to lift the blockade. Those protests have intensified in recent weeks as Egyptian and U.N. attempts to broker a truce have faltered.
There was no immediate claim for Wednesday’s rocket attack, which struck a home in the southern city of Beersheba, some 50 kilometers (30 miles) from Gaza.
The military said another rocket from Gaza landed in the sea, just off the coast of central Israel.
No injuries were reported in either strike, but the long-range attacks with powerful rockets signaled an escalation out of Gaza. Lt. Col. Jonathan Conricus, a military spokesman, dismissed Hamas and Islamic Jihad’s criticism of the rocket strikes, saying they were the only groups with the expertise to fire such a weapon.
Beersheba is the largest city in southern Israel, with about 200,000 residents.

Residents Awoken by the Massive Blast

Israeli officials said a woman and her three children whose home was hit evaded harm by rushing to a bomb shelter after warning sirens woke them up shortly before 4 a.m.


“It was very scary. If it was falling on my house, I would be dead for sure.” — Segev Naveh, Gaza resident
The mother’s swift response likely saved their lives. The home was destroyed, and debris was scattered throughout the street, damaging parked cars and adjacent structures.
Next-door neighbor Segev Naveh said he did not hear the warning sirens and was awoken by the massive blast.
“It was very scary,” he said. “If it was falling on my house, I would be dead for sure.”
The medical service said two other Beersheba residents were injured during the panic to seek cover.
Following the attacks, schools in Beersheba were closed and Israel’s military chief cut short a visit to the U.S. to come back and manage the crisis.
As a first response, Israeli military jets pounded Hamas targets across the Gaza Strip. The Gaza Health Ministry said a 25-year-old militant was killed inside one of the posts targeted. Three other people were wounded.
Lt. Col. Jonathan Conricus, a military spokesman, said 20 Hamas targets were struck, including offensive tunnels and weapons workshops. The military released video purportedly showing militants preparing to fire another rocket toward Israel before they were targeted. 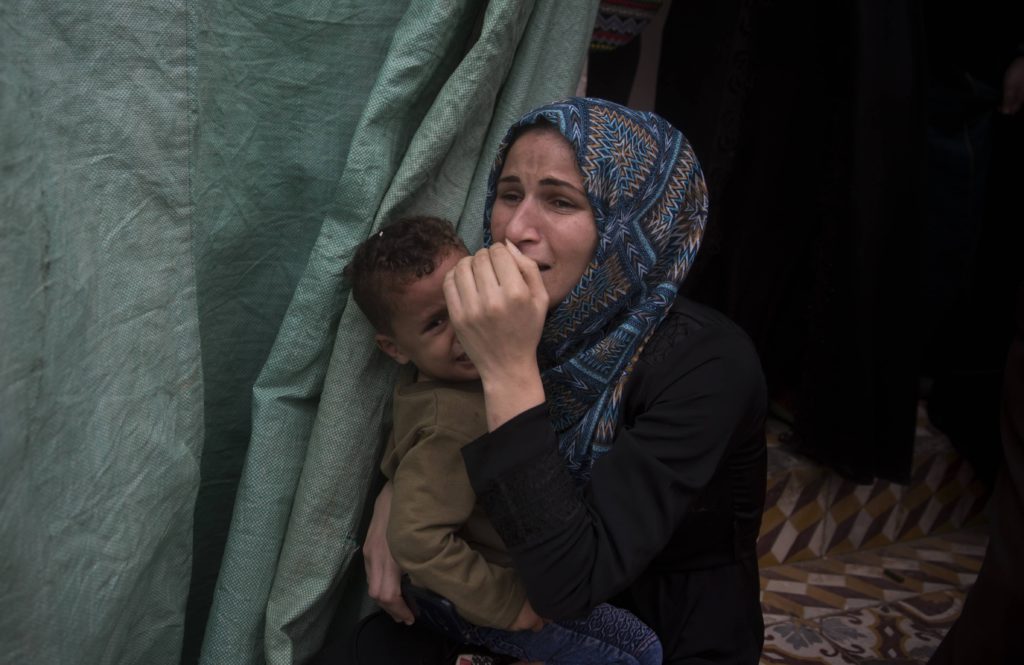 Relatives of Palestinian Naji Zaanin, 25, who was killed in a morning Israeli airstrike, mourn in the family home during his funeral in town of Beit Hanoun, northern Gaza Strip, Wednesday, Oct. 17, 2018. (AP Photo/ Khalil Hamra)

Fighting Has Flared up on Several Occasions

Fighting has flared up on several occasions in recent months, though neither Israel nor Hamas appears to be interested in another full-blown war. Egypt and the U.N. have been trying to mediate a long-term cease-fire.
It was unclear whether the Egyptians were making any progress. Late Wednesday, the Egyptian delegation abruptly left Gaza and entered Israel.
Meanwhile, Hamas announced that the head of Egyptian intelligence, Abbas Kamel, had called off a planned visit to Gaza on Thursday.
“We are sorry that minister Abbas Kamel has canceled his visit to Gaza and Ramallah,” Moussa Abu Marzouk, a top Hamas official, wrote on Twitter.
U.N. Mideast envoy Nickolay Mladenov said the situation was “particularly complicated” after the rocket attacks.
“Unfortunately, they fit a pattern of provocations that seek to bring Israel and Gaza into another deadly conflict and confrontation,” he said at a meeting with Israeli President Reuven Rivlin. “It is our responsibility to do everything possible to avoid that confrontation.”
He said steps need to be taken to avoid war, alleviate the humanitarian situation in Gaza and to bring the internationally backed Palestinian Authority, ousted by Hamas in 2007, back in control of Gaza.

A Blockade Has Restricted Hamas’ Ability to Govern

“This is the only path forward and we need to make sure that in the next 48 hours we really see a de-escalation on the ground so that these efforts can continue,” Mladenov said.


“This is the only path forward and we need to make sure that in the next 48 hours we really see a de-escalation on the ground so that these efforts can continue.” — U.N. Mideast envoy Nickolay Mladenov
The Israel-Egyptian blockade has restricted Hamas’ ability to govern and made life extremely difficult for Gaza’s 2 million residents. Electricity is supplied for roughly four hours a day, unemployment stands at more than 50 percent and tap water is undrinkable.
The Hamas-led protests have intensified as Egyptian-mediated cease-fire efforts faltered. Last week, some 14,000 Palestinians thronged to the perimeter fence, burning tires and throwing rocks, firebombs and grenades at soldiers stationed atop earth mounds on the other side. Some 20 Palestinians breached the border last Friday, and seven Palestinians were killed, including four who the military said had entered Israel and approached a military position.
In response, Israel has halted Qatari-donated fuel shipments to Gaza’s power plant that were meant to ease the electricity crisis.
Since March, 155 Palestinians have been killed during the protests. One Israeli soldier was killed by sniper fire in July.
Hamas seeks a cease-fire with Israel to secure an easing of the blockade but accuses its West Bank rivals, Fatah, of thwarting the effort. Repeated attempts to reconcile Hamas and the West Bank-based administration of Palestinian President Mahmoud Abbas have failed, adding to the desperation fueling the demonstrations.
Related Topics:delegationEgyptianGazaHamasIsraelmilitaryPalestinianrocket
Up Next