SACRAMENTO — As the political battle to overturn California’s gas tax increase intensified, the state transportation agency coordinated frequently with the public affairs firm working to block the repeal on behalf of unions, construction companies and local government groups, emails obtained by The Associated Press show.
The California State Transportation Agency and Sacramento-based Bicker, Castillo & Fairbanks organized news conferences and other efforts to promote legislation to raise the tax to fund road and bridge repairs, which passed the Legislature in April 2017. After Gov. Jerry Brown signed it, the agency and firm continued planning events and coordinating social media posts as opponents gathered signatures for repeal.
Three ethics experts interviewed by the AP said the emails raise concerns that the agency’s relationship with the firm was too close, but none saw a clear violation of campaign laws, which prohibit the use of public resources for political campaigns.
The repeal qualified for the November ballot in June. The firm, BCF, continues to work for the anti-repeal coalition, which includes the League of California Cities and the California Chamber of Commerce.
Some communications between BCF and the state agency involved politics, according to more than 200 emails from 2017 and the first half of this year obtained by the AP through the California Public Records Act.
Last fall, the agency and firm discussed opinion pieces “targeting” U.S. Rep. Darrell Issa and three other vulnerable Republicans in Congress. National Democratic leaders see those seats as key to winning control of the U.S. House.

In January, a BCF partner, Kathy Fairbanks, communicated with the agency about designing a campaign logo for Proposition 69, a June ballot measure involving how gas tax proceeds are spent. And an undated memo shows the agency and firm also planned to coordinate efforts for several months through the primary.

The legislation approved last year raised gas taxes by 12 cents per gallon and added diesel and vehicle fees to generate $5 billion annually. Proposition 6 would repeal the increase and require voters approve gas and vehicle tax increases.
The ballot measure is a centerpiece of California Republicans’ efforts to boost turnout. GOP Congress members — including House Speaker Paul Ryan of Wisconsin, Majority Leader Kevin McCarthy of Bakersfield and Orange County’s Mimi Walters — are among the repeal’s biggest financial backers.
Leaders of the repeal campaign have asked the federal government to investigate their claims that public resources have been used against them, based on emails and other documents that show local government workers discussing the repeal effort. Those documents are different from the ones the AP obtained. Opponents also circulated a video of a Caltrans contractor passing out anti-Proposition 6 fliers to drivers.
The California Department of Transportation, known as Caltrans, falls under the state transportation agency.
Melissa Figueroa, the agency’s deputy secretary for communications and strategic planning, said it’s the agency’s job to inform the public about the impact of laws, and it has done so in the past, including for California’s “motor voter” registration law.
“We’re trying to be good stewards of taxpayer dollars,” Figueroa said. 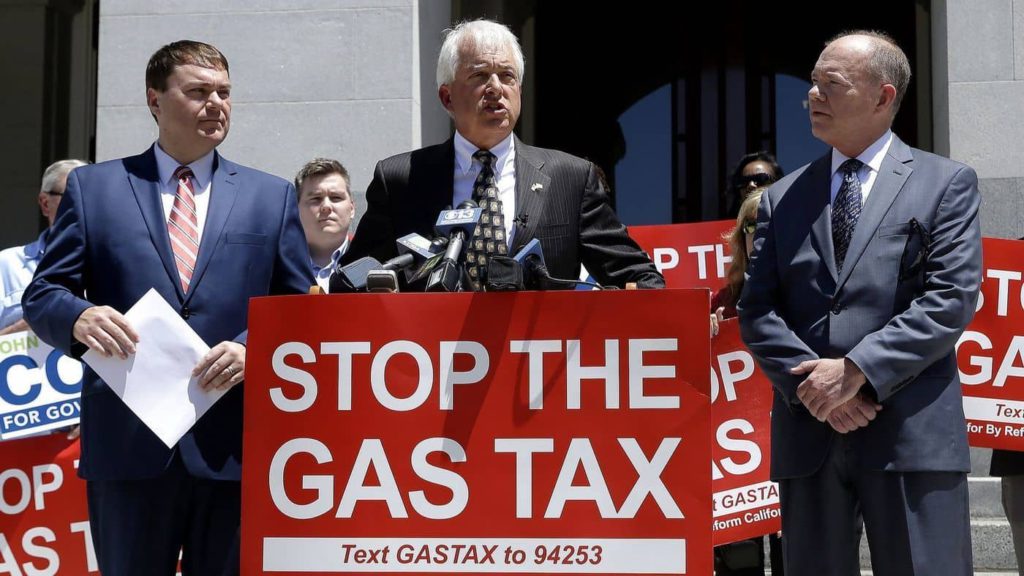 The Agency Communicated Much Less Frequently

The agency communicated much less frequently with the firm and stopped coordinating social media posts once the official anti-Proposition 6 campaign started, Figueroa said.

The Agency Wasn’t Involved in Campaigning for Proposition 69

The agency and coalition coordinated their schedules, but the agency wasn’t involved in campaigning for Proposition 69, Figueroa said.
Castillo sent the email about op-eds focused on GOP candidates Sept. 20, 2017.
“Hey Melissa — We’re penning opeds (sic) targeting the following congressional republicans,” he wrote. He identified Reps. Jeff Denham, Steve Knight, Walters and Issa and asked Figueroa for information about projects funded by the gas tax increase in their districts.
At the time, the coalition was working to persuade California’s influential Republican congressional delegates to reject the repeal.
Several days after Castillo’s email, Figueroa suggested she or Brian Kelly, then the agency’s leader, help find an author for the piece targeting Issa, considered the most vulnerable California incumbent before he decided against seeking re-election.
Castillo responded saying coalition members were working on it and asked: “Do you have anyone in mind that could influence Republicans/Issa?”

The documents obtained by the AP don’t include further exchanges on the issue. In interviews, Castillo and Figueroa said the agency never suggested an author. Figueroa said she offered help because the op-ed would educate people in Issa’s district.

Trump Lashes out at Warren Over DNA Test, Calls Her 'Phony!'